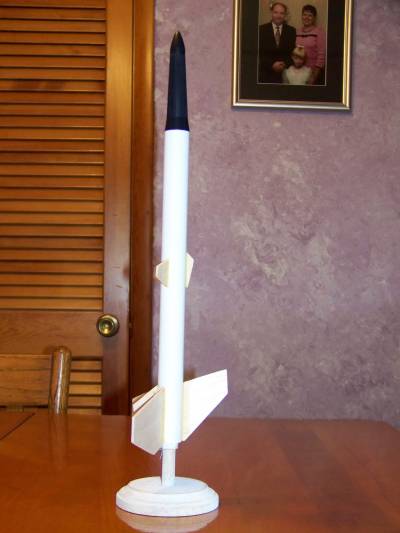 I picked this one up while passing through St. Louis; I had never seen one like it.  Not surprising, I later learned, as I was able to find it in the early Quest catalogs on Ninfinger's site, but not on the current Quest website.

When I discovered that it was both OOP and not reviewed on rocketreviews.com, I thought perhaps I'd be able to get the first review in.  I procrastinated too long, it seems... here's hoping I have something to add.

The kit included a three-piece nosecone, body tube (which is not described at all in the plans, but is a 12" long piece of T-25 tube), 2.75" long x 18mm engine tube, engine hook, two centering rings, thrust ring, 18 inches of white elastic and 12 inches of Kevlar for the shock cord, a standard Quest parachute (unassembled), launch lug, die-cut balsa fins, and a sheet of self-adhesive decals. 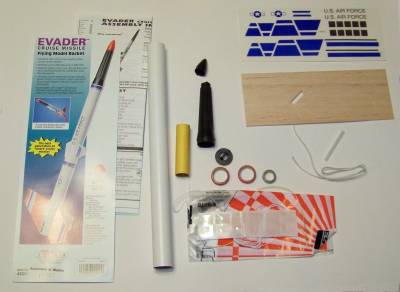 A typical well-written and nicely illustrated Quest instruction sheet greeted me when I dumped out the bag.  The first step is to glue together the three-piece nose cone.  I showed my wife the cone, and she agreed with me that the middle piece appeared to be a part of something non-rocket related, but we couldn't figure out what that might be.

After musing over it a while, I applied plastic cement in the indicated areas, assembled it, and laid it aside to dry.  Still on number 1 in the instructions, I assembled the engine tube, cutting the usual engine hook slit and installing it and the thrust ring.  Curiously, the thrust ring insertion is left until step 6, but I couldn't see any reason not to go ahead and put it in, so I did.

Steps 2 through 5 call for a fairly standard engine mount assembly, so I'll omit how I went about it, except to say that I changed the Kevlar mounting method slightly.  The plans call for a knot in the end of the cord, which will prevent it from pulling out from under the upper centering ring.  I prefer to actually loop the Kevlar around the engine tube and make a small notch on the outside of the centering ring, so that the Kevlar is a bit further from the hot stuff at deployment.

As I mentioned, step 6 was just the insertion of the thrust ring.  Next, the elastic and Kevlar are knotted together; again, pretty standard stuff.

I have to say, at this point, that I blame much of the awkwardness of this kit's instructions on its age; the Evader is OOP, after all.  I know that later Quest models prescribed assembly methods that are easier to perform.

Finally, I followed the instructions more or less as given to mark the sustainer fin locations (using the standard "wrap" method), and to square up and attach the fins and launch lug.

Assembly of the parachute using the plastic "gripper tabs" was my last step.  I outfitted it with a snap swivel, so that I could separate the parachute from the rocket; I do this with almost all of my rockets, as it makes packing up after a launch much faster (no need to refold the chutes, just stuff them in the bottom of the range box and deal with them later).

The rocket is marked skill level 2, but honestly the only reason I can think for it to be a level 2 rocket is the two forward "canard" fins and the three piece nosecone.  It's really a pretty easy rocket to build. 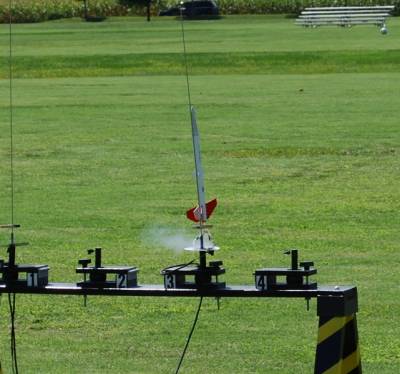 The packaging shows a fairly basic paint scheme, with the body tube painted white, three of the fins painted a color I'd call orange, and the nose cone painted red (at the tip) and black (over the rest of it).  Masking the nose cone to paint it two-tone seems rather difficult to me; I chose to paint the entire cone aluminum.  I also chose red rather than orange for the fins.

The directions call for painting the rocket gloss gray all over (fins included) and the nose cone black and orange.  This would not be as attractive as the package art, in my opinion.

The supplied self-stick "decals" were a disappointment all around.  They were fairly thick (though perhaps you could level the same complaint at most sticker sets), they were not die-cut (so you have to cut around the individualstickers), and most significantly, they weren't very well printed.  One particular complaint is the Air Force star-and-bars insignia included, which were printed only in blue (no red stripe) even though the red stripe is shown on the packaging.  Also, a sticker shown on the packaging as part of the dorsal fin decoration is not on the sheet at all (or, alternately, they painted the dorsal fin of the rocket on the packaging two colors, orange and white, then applied a strange little blue stripe from the sticker sheet... if that was how they did it, I have to say I don't like that either).

The end result here is that a rocket finished using the instructions would not be as attractive at the rocket on the package; on the other hand, if you tried to reproduce the package art version, the defects in the stickers would rear up
and bite you.

I chose to scan my stickers, then create waterslide decals from them.  Having them scanned allowed me to fix many of the defects.  As you can see from the pictures, I also chose not to use the entire set.

Please note that I deducted quite a bit from the "Construction and Finishing" rating for the crappy stickers.  It's not a bad build at all, but finishing it so it looks good is a lot harder with stickers.

On August 22, 2009 I joined the SPARC guys in St. Peters, Missouri for their regular monthly launch. They were launching at the soccer field this time, so we drew some spectators, which was pretty cool.  It was a bit breezier than I prefer, but it had been a while since I'd launched any rockets so I threw caution to, well, the wind.  I'd say we had gusts around 15 mph or so.

I launched the Evader twice, on an A8-3 and a B6-4, using an Estes chute (since I seemed to have mislaid the Quest chute). Both flights were very nice. Note that the manufacturer didn't recommend the A8-3, likely because they don't sell them, but it works fine. I did have a bit of trouble getting the nose cone to stay straight. I fault the rather short nose cone shoulder... it's just too easy to get it crooked. But the flight, deployment, and recovery were all good.  Overall it's a pretty nice flier.

The Evader is a pretty standard rocket; there are no particular unexpected pros or cons to the standard parachute recovery method.

As a basic pseudo-scale sport rocket, the Evader was pretty decent.  Given the oddball nose cone, cloning it is probably out of the question... so I don't suppose it matters whether I recommend it or not, but I do.  The only real fault I saw was the stickers. 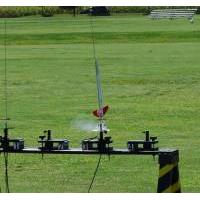 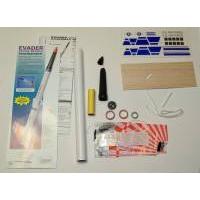 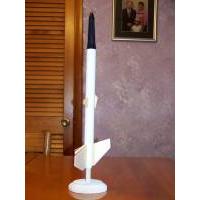 Always liked this model, have yet to get one. Thanks for posting the reivew.

That three piece nose cone was the same used on the MPC Martian Patrol.

The center piece was a long adapter offered by Quest: http://www.ninfinger.org/rockets/nostalgia/92qst16.html