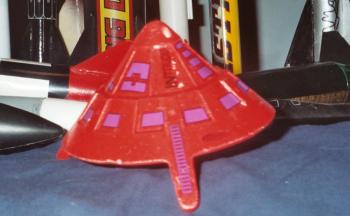 Brief:
Little cheap-o rocket I found at ACE in March 2005. The last recorded year it was made was in 1996. This things almost 10 years old! It's a fun rocket to play with in your own yard.

Construction:
The rocket consists of only 2 parts: a body tube and the styrofoam body. It also came with decals.

Construction was completed in about 10 seconds! All you have to do is paint it and install the engine tube! Just slap on the decals and you're done! How simple can it get?

Finishing:
Painting consisted of a light coat of Testors Enamel in Italian Red. There were many decals. I painted mine to match the one on the box.

Flight:
The Intruder is a very good rocket to burn off motors. It may also be the cheapest to fly! No wadding is needed. I flew it 4 times, well actually only 3 motors got the rocket off the pad. The thress successful flights only went up about 50 feet.

Flight 1: Something went wrong and the engine ejected while the rocket was on the pad. The motor burned on the ground.

Flight 3 was about same, but hit street and damaged the top a little

Flight 4 was same as the others.

It flies nicely, but could go much higher!

Recovery:
There is no parachute or streamer. It just ejects the engine and falls to the ground.

Summary:
Not a bad rocket for the kids. No gluing whatsoever. It is pretty much ready to fly in seconds!