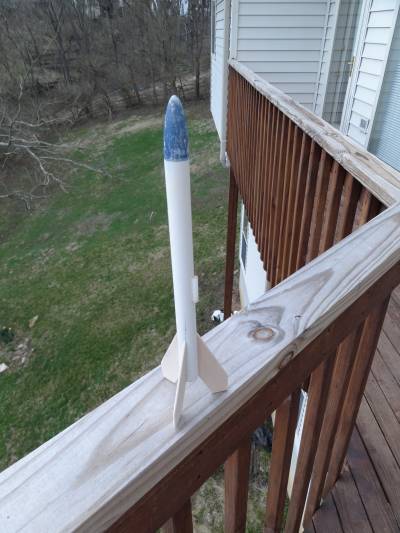 While not a rocket to be counted as exotic, the Estes Spin Fin always intrigued me because of the canted fins and the flight path that was supposed to result from them.  Even still, it was very unlikely that I'd have cloned a Spin Fin had an original decal and nose cone not been included as part of seperate Ebay lots purchased a few years apart.  I can read the signs.  I cloned a Spin Fin.

While at heart a simple 3FNC rocket, the details are what makes the Spin Fin unique.  It can be built as a standard 3FNC bird with the fins aligned straight or with the fins canted slightly to the right to cause the supposed corkscrew motion to the flight path.  I've got plenty of straight on 3FNC birds, so it was an easy choice to build this one with the fins canted.  This is accomplished by using the fin marking guide that has the lines drawn on the slight angle.  Other than the angled fins, all that is involved in the construction of this bird is gluing in an engine block and recovery system.  It was in this process that I discovered a "gotcha", but one all of my own doing.  It was finished except for the thrust ring, so I tied a piece of Kevlar onto a ring, spread some white glue around the inside of the tube, and used an expended engine casing to push the ring into place.
It caught.

I looked around the shop for something to pull it out with, but found nothing. I hopped up, sprinted upstairs and ran outside to my car where I knew I had a multi tool.
In my underwear.

It rained that night, so the ground was still soaked, as were my socks. I sat down in the driver's seat, pulled out the tool and tried to remove the engine casing. No luck. I tried again. Still nothing. At this point I'm thinking that it's stuck and that I'm going to need to fly it with mini engines, but I wanted to give it one more shot.
It pulled loose.

Let this be a lesson to you.  Wear pants during late night build sessions. 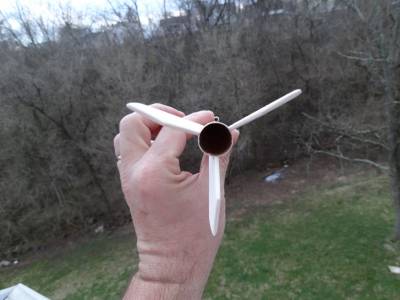 Balsa grain and tube spirals were eliminated in the time-tested manner of primer, Elmer's Fill & Finish, and sanding.  After two rounds and a final coat of Valspar white primer it was sprayed with Valspar gloss white, followed by gloss red on the nose cone and 2/3 of the fin can area.  The decal was sprayed with Testor's Decal Bonder, but were of indeterminate age and proved to be quite fragile and unusable.  I then printed off a set of decals using the scans from JimZ's site and my inkjet printer.  I was disappointed, but not surprised by the decals falling apart, but since I really only wanted to see if the canted fins caused a noticeable spin in the flight path, it was a minor annoyance. 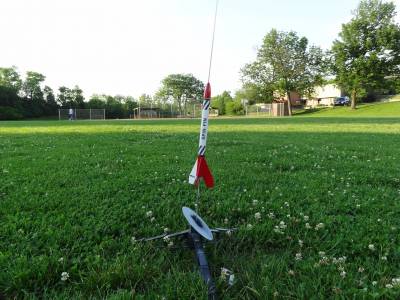 Only one flight so far, but that was enough to tell me how well the "spin" feature appeared to work.  Minimum diameter rockets do well at B6-4 Field on A8-3's, so I taped one up and loaded it in.  I made the mistake of trying for a launch picture instead of watching for the flight characteristics, but the smoke trail was dead straight, without any of the corkscrew shape that I figured would denote a spinning flight.  Flight was high and straight, and recovered on the infield.  Apparently my rockets only do the spin thing when I don't mean for them to do it.

In reality, the arrow straight flight would likely be the product of an imposed spin, so I'm going to call the Spin Fin an engineering marvel.

I regularly garbage pick mylar at work that is used to cover the adhesive on shipping envelopes.  The mylar strips are silver, shiny, and small enough to fit easily into the body tubes on BT-5 and BT-20 birds.  I taped one onto the shock cord before the flight, but saw nothing as I tracked the rocket after ejection.  When I approached the infield where it landed, I found nothing but shock cord.  No UFO sightings were make in Ft. Thomas that evening, but I like to think someone saw an unexplained silvery shape floating around in the vicinity of Woodfill Elementary.

Pros: Not a hugely exciting design, but I can see someone having a soft spot for it if it was their first rocket.  Great performance on an A8-3.  Really pushes the limits of small fields.

Cons: The "spin" feature is difficult to detect. 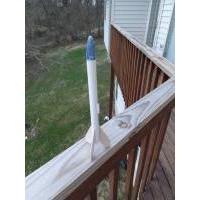 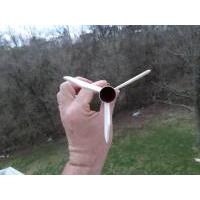 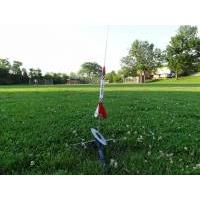