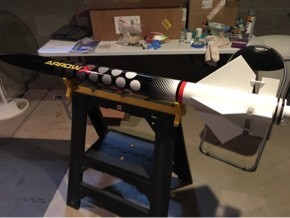 After wading through a sea of mundane "Dad" presents this past Christmas (literally socks and underwear), at the end of it all my wife retrieved one final gift hidden deep in the back of a closet: a Fusion Rocket Arrow X. It was my Red Rider BB Gun moment - the box was even marked "FRAGILE" so it must be Italian...

I'd recently renewed my Tripoli membership and recertified Level 1 after having been out of the hobby for several years, and I was ready to move on to something bigger for L2. After learning Scott Binder was back in business under his new Fusion brand, I had figured on picking up a Thor. It had been at the top of my wish list years ago, but then I saw the new Arrow X on his website and was hooked. I loved the styling and added details like the fin doublers and nozzle. 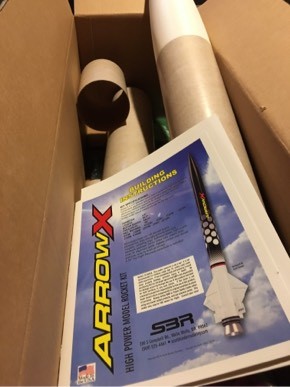 All the components were high quality: heavy duty plastic nose cone and cardboard body tubes, with laser-cut plywood fins and centering rings. Rings fit nice and snug after a little bit of sanding. A 50" Top Flite chute and plenty of tubular nylon shock cord is included. All the hardware is there: rail buttons, quick links, plastic rivets, and motor retention. Scott also includes a camera mount kit and template for cutting out a viewport, which is a nice touch. Guess I'll need to invest in a GoPro at some point.

Instructions came in a full color glossy booklet that was so nicely done that it'd be almost impossible to screw it up. I say "almost" because I did screw it up: instead of beveling the leading edge of the small trailing fins, I beveled the outer edge. Don't ask me how, as they're clearly marked with an arrow pointing you in the right direction. Scott was nice enough to send me a replacement set, which I later learned he was in the middle of dealing with some serious health issues. Kudos to him for stellar customer service.

The included electronics bay is a bit of an odd design if you're used to LOC-style bays and requires a little forethought: that is, if you assemble it per instructions you could have a really hard time drilling through the bulkheads for wiring and BP charge holders. I did this before final assembly.

I was somewhat disappointed to see the nozzle is just craft paper over a couple of plywood reinforcing rings, but the brushed aluminum decal wrap that finishes it all looks quite convincing. It's for display only as you can't really use it with the provided retaining clips. 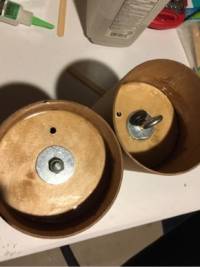 Finishing was easy for being such a large rocket. If anything I made it harder than necessary by painting and sanding too much as I didn't know how those body tube grooves would show beneath the vinyl wrap. Turns out I needn't have worried.

I used Krylon primer and paint, but it didn't fill in the grooves well enough. They're fairly deep and remained just noticeable enough to bug me, but I should've used wood putty instead. I'm picky about finishing.

I haven't applied a full body wrap before, so it took some getting used to. Fortunately the adhesive doesn't fully set until the decal's been pressed down firmly, so after many stops and starts and do-overs I finally got a smooth finish. Just be sure to carefully mark a sight line and keep everything even as you roll it on, otherwise it's easy for the edges to end up off-kilter. 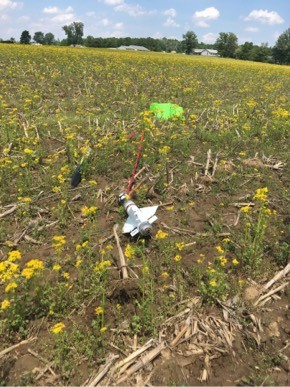 Spring flying weather in Ohio is typically dismal; most launches end up being cancelled for rain or impassable field conditions. This year, not so much! Spring was mild and mostly dry, so Tripoli Mid Ohio enjoyed one of the best flying seasons they've ever had. Unfortunately I missed most all of it as we spent the spring preparing to sell our house, but I was able to make it to the last launch of the year on May 18th. It was a beautiful day with blue skies and low 80s temperature, which are not conditions we see often at TMO launches.

After missing only one question on the L2 exam, I prepped a J350 reload and loaded it up on the rail after inspection by the LSO, Gary Dickinson. Continuity check, 5-second count, and it took off with a roar. I'd seen plenty of J-class motors at our launches but it's definitely more of an attention grabber when it's on your own bird and the biggest thing you've ever flown before was an I300.

Open Rocket predicted a 3000' apogee and I'd say it got every foot of that. Then came the wait...

In the past I've always checked winds aloft but for some reason didn't this day. They must have really been cranked up because when the chute deployed just past apogee the rocket started drifting. And drifting. And drifting...holy crap, was it GAINING altitude? Either way, it wasn't coming down. It turned into a hot air balloon and just kept going and going, past the field boundary, across the highway, over the next farm, finally coming down behind a stand of trees about two miles away.

My son and I took off. After over an hour of stomping around in marshy woods, I finally walked up a rise another 1/4 mile or so behind us just to see if being on higher ground would help. And honestly, praying that God would lead me to find this stupid rocket because not only was my L2 hanging on it, I was using a borrowed motor casing. God must look out for fools and rocketeers (but I repeat myself), because the wind picked up right then and a neon green 50" chute billowed up out of the weeds on the other side of the hill!

It was recovered literally without a scratch, other than the ones on my legs. Stuffed the 'chute back in, brushed off the mud, and it was ready to go. I felt a little like the end of "The Right Stuff" when Chuck Yeager is walking away from a smoking hole in the desert:

We drove back to the launch site blasting the theme from The Right Stuff. I think everybody got the joke.

Great kit, highly recommended. I was very happy to see Scott is staying in business after his health scare. Once I'm in a position to build again, it'll be time to pick up a Thor! 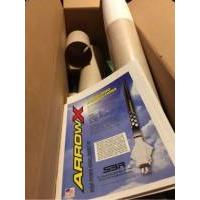 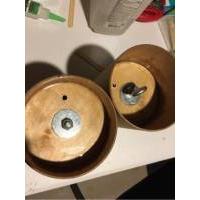 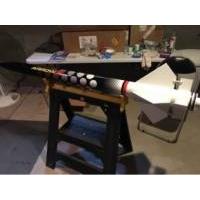 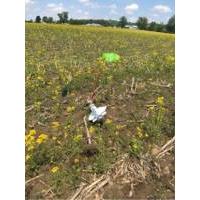