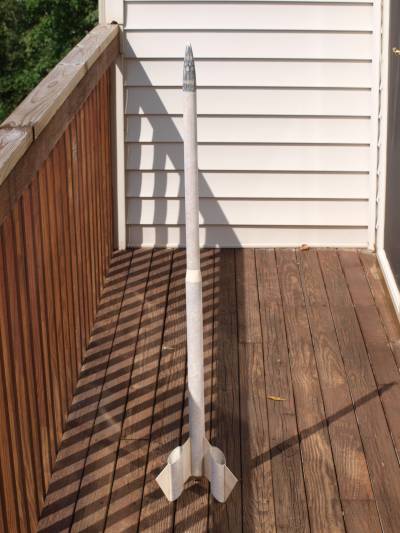 The Viking 6 is an amalgamation of the FSI Viking line, which in real life stopped after the Viking 5.  During my recent cloning of the Viking 5 and upscale of the Viking 2, I screwed up on the measurements for the first tube fin I cut.  It sat on my desk until the end of the project, at which time I realized that the mitre cuts were nicely done and that it could be a part around which another rocket could be built, so I made two more, being more careful with my measurements this time.

As luck would have it, around the same time I also received a package of previously used balsa nose cones from an Ebay auction win.  One of the cones included was a BNC-55AO, better known as the Estes Goblin cone.  I have two Goblins already, and another cone that I bought years ago for an Estes Bandit clone, so I felt that the cone would be perfect as a part of this project.  At that point I had 3 BT-60 tube fins and a nose cone that fit a BT-55 tube.  With this in mind as a starting point, I decided to do my own version of the mythical next bird in the FSI Viking line, the phantom Viking 6.

Incidentally, my Viking 6 borrows freely from other Vikings in the line.  The 5560 transition the same one used in the Viking 5, but upside down.  The fin strakes were used on the Viking 3 and 4, and the finlets from the Viking 2, and I guess you could include the Viking 1 because it started the whole mitered tube thing.

At the start of this build, the only ideas I had that were set in stone were the tube sizes, BT-60 and BT-55 because of the previously cut tube fins and the rescue nose cone, and that it would have a transition.  Since I knew the size of the tube fins, I traced out a set of strakes that were the same length and angle as the fins.  I also drew some sketches until I found a pattern for the finlets that I liked, and cut them out of the same 1/16" basswood as the strakes.  When the whole strake/tube fin/finlet is together and viewed from the side, it looks like a seamless unit because the angles on the top of all three match.

The actual height of the rocket was in question from the start.  I'd originally planned to make it a short, squat bird with whatever scrap BT-60 and BT-55 I could find in my shop, but none of the combinations that I tried looked right until I put two long tubes together with the transition and nose cone.  The result looked right and the end product would be longer than the Viking 5, itself a pretty tall bird. 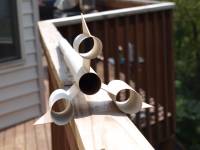 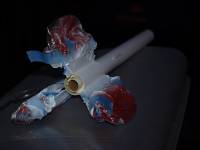 Other than the strakes, finlets and tube fins, this is a fairly pedestrian project.  For now I have it set up to break in the middle, but I haven't yet given up on the option of drilling the transition and making it a nose-blow recovery bird.  (Something that would require a LOT more sewing elastic shock cord.)  As with all of my builds, the recovery system consists of a 36" length of 150# Kevlar tied behind the forward centering ring and glued in place.  A 36" length of 1/4" sewing elastic is attached to the end of the Kevlar at one end and a medium snap swivel at the other, which attaches to the nose cone. 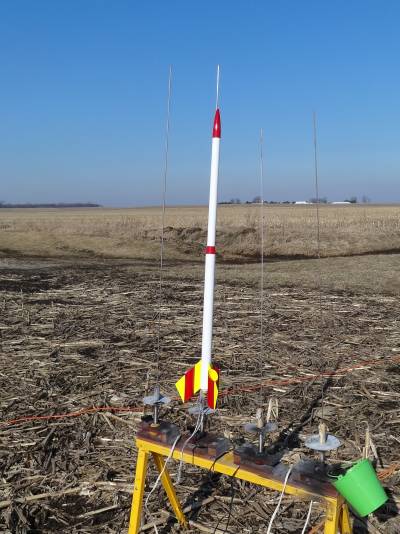 This was a fairly new experience for me.  Because this is my own design, I had nothing to follow when the time came to paint.  After the filling with thinned Elmer's Carpenters Wood Filler and several rounds of sanding, the entire rocket got a coat of Valspar white primer.  I knew the inside of the tube fins would be done in a flourescent color, because it's how I do things and because I like the added visibility.  For the Viking 6, I chose a flourescent yellow, which I used not only for the tube fin innards, but also the strakes and finlets.  I just painted almost the whole aft section of the rocket with Rustoleum flourescent yellow, which looks great but tends to run a lot faster than the orange paint.  The parts that were to be left yellow were masked off and the outside of the tubes, along with the transition and nose cone, were sprayed with Valspar Cut Ruby red.  When the paint was dry, I covered the tubes with Saran Wrap and sprayed the body tubes gloss white.  The end result is fairly simple, but I like the way it turned out. 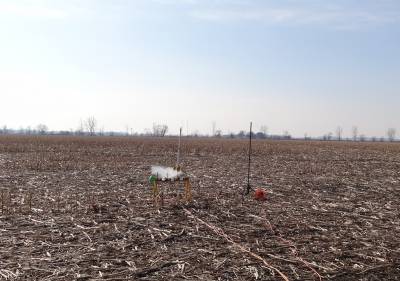 The Viking 6 was my leadoff bird at a TORC launch in the South Charleston cornfield in February of 2012.  (It was to have been my leadoff bird for the previous TORC launch, but I'd forgotten a launch lug AND a screw eye for the recovery system.  A personal trademark.)  Loaded with an Estes E9-6, the Viking 6 windcocked back over the flightline at liftoff.  Despite the obvious arc in the flight path, everything about the flight looked normal until the time came for the ejection charge to fire.  The Viking 6 was nose down and heading rapidly back to earth when the charge finally fired barely 100' from disaster.  The parachute fouled on the rear tube fins and the rocket impacted earth in a horizontal free-fall, luckily behind a small rise across the access road.  I was expecting the worst, but the results weren't as bad as I'd been afraid they might have been.  Two of the strake/tube/finlet structures had broken cleanly off at the root and only needed to be reglued and filleted.  There was a slight zipper at the top of the BT-60 tube, but other than that and some mud, the tubes were in great shape.

The necessary repairs took a month, which was coincidentally how long it was before I made it up to another TORC launch.  This time the Viking 6 was part of a line of rockets that I flew on Estes E9-4s.  This time the Viking 6 performed like I'd hoped it would on the first flight.  It windcocked off the pad to the left and after a perfect flight, popped the chute just as the forward momentum stopped.  Recovery was handled by a 12" chute to cut down on the drift and recovery walk.  This worked well and the rocket landed just in front of the launch pads, but I think I'll be upping the size to 15" or 18" for the next flight. 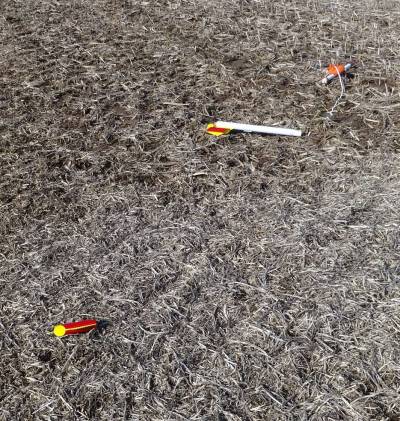 Pro's: I've had a lot of compliments on the overall looks of the Viking 6 and on the paint job as well.  The flourescent yellow really pops nicely alongside the dark red and visibility is not a problem.  It's nice to see my own design perform well. 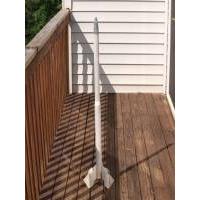 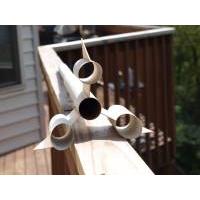 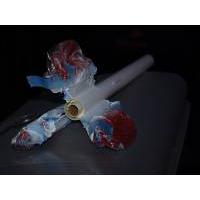 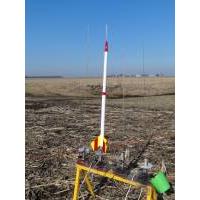 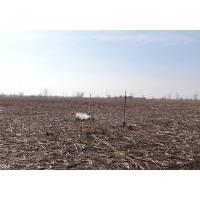 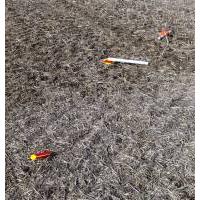