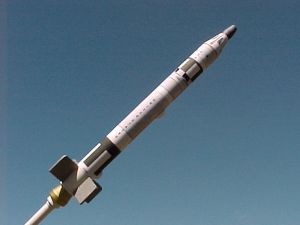 Construction:
The kit has the usual Dr. Zooch features: a sturdy box that doubles for storage of the completed model, quality printed wraps, instructions written by a cartoon ant, humour, and insight. The components were all present, including niceties like an engine hook and snap swivel for the famous trash bag parachute.

There are no skill levels given for Zooch kits, but this one is labeled as an “easy build” and some contributors on The Rocketry Forum have recommended this kit as an introduction to Zooch kits. You will have to cut your own fins from balsa sheet. Difficulty is ‘about an Estes 2’.

The kit build uses not only your normal rocket building skills, but some card/paper modeling skills as well. Don’t worry if you have never built a paper model in your life, the skills are easily learned.

Highlights of the kit are the quality components, the detailed wraps, the blowout panels, and of course, the prominent engine bell. 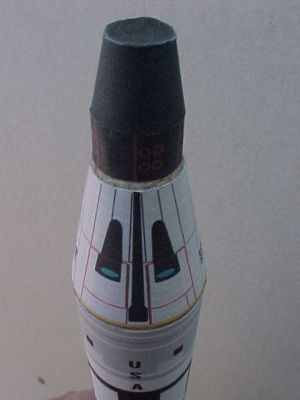 My deviations from the good Doctor's instructions were minimal. I used PVA (white glue) throughout, except for bonding card shrouds and wraps, where I used tacky craft glue.

Construction begins with the capsule. If you dust the capsule with a light coat of grey primer before fitting the wrap, it will cover the small gap you may get between the capsule wrap and the RCS band (under the black cone in the picture). I'll do that next time.

I attached the Kevlar® shock cord to the engine mount, rather than using the standard tri-fold method called for in the instructions. The engine mount is made from a motor tube, three centering rings, and a paper cone. The paper cone fits between the second and third rings outside the body tube, giving you the prominent ‘engine bell’. The overall effect is quite outstanding. Zooch calls this "... the coolest engine mount ever". I won't disagree with him.

After applying the body tube wrap and inserting the engine mount, the body tube is cut along a separation plane marked on the wrap to give you the payload section. That’s right, you have a partially built rocket and now you’re going to cut it in half! This is probably the most nerve wracking part of the build. Just take it easy and there won’t be any problems. Use a new blade in your modeling knife and go gently. Don’t try to cut the tube in one pass. The top part of the tube becomes the payload section. 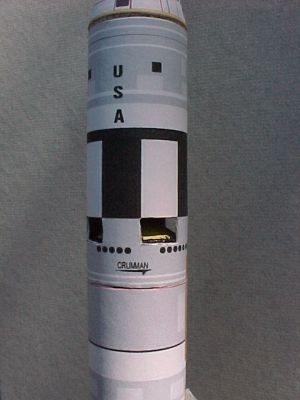 After cutting the body tube, apply some CA glue (super glue) around the inside of the body tube and allow it to dry before cutting out the blowout panels. If you like, you can temporarily fit the balsa stage coupler into the tube to provide some support to the tube while you cut out the panels. Again, a fresh blade is a good idea. The blowout panels don’t actually do anything, they just look funky!

The stage coupler is weighted (about 15 grams) and must be installed the correct way up to give the proper CG/CP relationship.

Dust a light coat of black or grey paint onto the top of the balsa stage coupler before attaching the tank top. The tank top doesn't reach the edge of the stage coupler and black or grey looks better here in my opinion than bare balsa. Similarly, paint the balsa disc before fitting it into the bottom of the payload compartment.

Cut your fins, fit them and the launch lugs, and your Dr. Zooch Mark II is complete.

My tips: Read the instructions. Read them again. Dry fit everything before gluing.

The body wrap fits perfectly. True, it does. If you trim the wrap so that it looks perfect when dry fitting, it will be the tiniest bit too small to butt join when you glue it to the body tube. Trust the Doctor, just cut that wrap along the edge you are given.

Building this kit was a great experience. I looked at the completed model and realized I had enjoyed the journey as much as the destination. Very Zen. 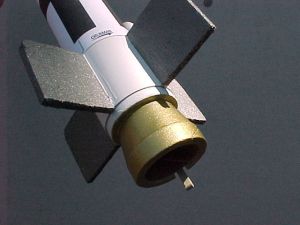 Finishing:
Because of the wraps on the capsule and body tube, there is minimal finishing to be done. I painted the bottom of the body tube white and just the fins with Testor’s 1180 Steel. The pictures on the Dr. Zooch web site show the full circumference of the body tube below the wrap painted with Testor’s Steel. I simply wanted more white.

The Testor’s Steel is the only enamel paint I used on this model, and I must say I had problems with it. It is thick with a lot of suspended particles and was like painting with epoxy. Maybe it's just my technique.

That engine mount bell deserves to be celebrated, so I painted it with Tamiya Gold X-12. 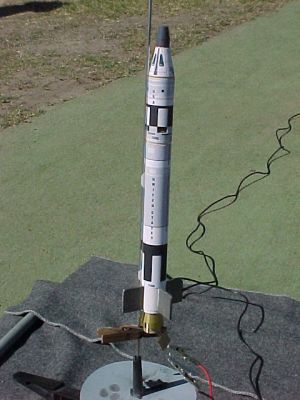 Flight and Recovery:
In the words of the doctor I’m a “squirming hatch blower”, so I started with an A8-3. It was a beautiful, arrow straight flight with a gentle recovery courtesy less than 2 metres from the pad, courtesy of the trash bag parachute.

Next up was a B4-4, with close to 200 metres at apogee it is a great small field motor for this model.

The Testor’s Steel paint is supposed to make the fins "disappear" in flight. Well, on my first two flights the Mark II was stepping out so quick you would be hard pressed to see the fins in flight if they were dayglo orange!

Summary:
A great build and a great flyer. What more could you ask for? Well, Dr. Zooch is offering more--a “Stage Zero” booster is planned for release late 2007.