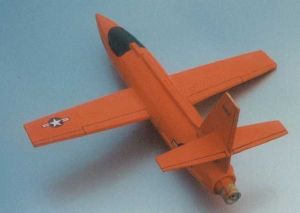 Brief:
I have built a 1/20 model of the Yeager Bell X-1, "Glamorous Glennis" as a prototype for scale competition. Although it needs more work in the details department, it is dimensionally spot-on exact 1/20 scale. It flies very well on Aerotech E30 motors. It was simply constructed by using the parts from the Estes "Canadian Arrow" kit (a modified V-2), and the basic concept could be used to make a larger one from any size V-2 kit (as you need the cone and boat tail). That said for this model to work, a number of restrictions need to be followed: 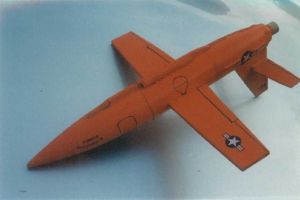 Deviate from these instructions and earthworms will die. 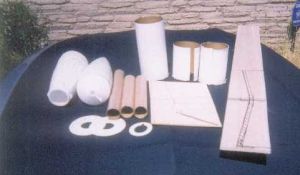 Construction and Finishing:
The Estes "Canadian Arrow" kit was a donor for the fuselage components: wings and tail surfaces are of balsa and light plywood. Dimensions are 1/20 scale:

Documentation came from Wikipedia. With some effort, this 1/20 scale X-1 could compete in NAR Super-Scale, since air-dropped rocket planes are exempt from the launcher requirement and Yeager actually launched "Glamorous Glennis" off the gear in 1949 (to Mach 1.03) without the B-29. 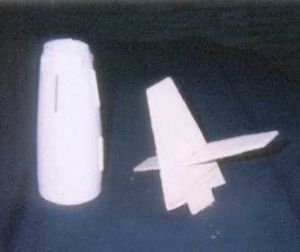 All construction utilized 5-minute epoxy. I hope the photos are helpful, however, the construction is quite straightforward. Body tube from the Estes "Canadian Arrow" was cut into 3 sections of 5", 3.5" and 3.5". The latter two sections were to use as doubler and tripler to reinforce the 5" main body tube and to accommodate the hips of the nose cone and boat tail. All but 3/8" of the hip of the boat tail was cut off with a razor saw. The nose cone was ballasted to a total weight of 250gm with lead split shot epoxied into the tip. The kit centering rings were used with 2 layers of 1/64" ply epoxied on as doublers. The kit motor tube was replaced with 6 5/8" of LOC 24mm tubing. Each wing was cut from 1/4" balsa to dimensions of 7" x 2"(tip) x 3"(root) with a 1" x 1/4" tab centered at the root for through-the-wall attachment at slots cut into the reinforced body tube. The entire wing was laminated on the upper surface only (including the tab) with 1/64" ply veneer. Scale speed on the E30 is 2470 mph (far faster than any X-1 ever flew) so it needs to be strong or the wings will come off. 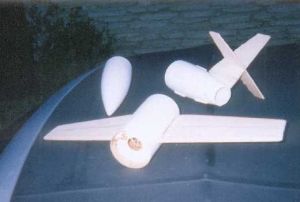 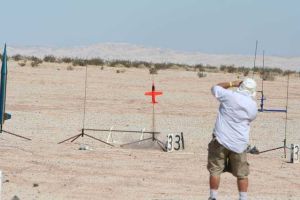 Flight and Recovery:
The only recommended motor is the Aerotech E30 with either 4 or 7 second delays being OK. Possibly the similar Aerotech E28 reload would work, but I haven't tried it and it is somewhat heavier.

First flight was on an AT E30-4 at the PlasterBlaster 2005 event. It was flawless with only a slight pitch-up moment developing under power that damped out on burnout. Recovery on the 24" chute was perfect if slightly early. Estimated speed was about 125 mph to 450', based on simulations. A second flight using an F21-4 ended with an auger-in under full power with total loss of vehicle. I never realized a thin Estes nose cone could punch through 6" of hard desert playa. The pitch-up moment that doesn't develop in only one second under power develops fully in two seconds. Only the stab survived and I have since rebuild my X-1 with nicer detail and it flies just as well too. So stick with the E30, please. 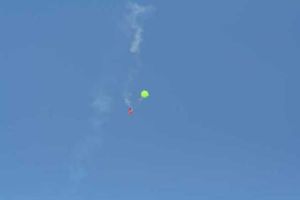 Summary:
PRO: For a scratch scale model, the Bell X-1 is not difficult to build at all. It is the only Bell X-1 rocket model design available that I am aware of, although I think there are R/C X-1 plans available. It flies very well if the restrictions are adhered to, namely using the E30 only and weight/balance followed. It qualifies for max scale points for NAR Super-Scale since the launcher requirement is waived. It is one of the easiest Super-Scale competition models you can build. 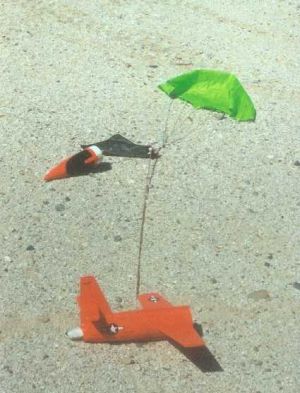 CON: Only one motor choice. The "Canadian Arrow" kits from Estes seem easy to find but that could always change. Any V-2 rocket model could be used similarly to create an X-1, although with different scale factors (and of course you would be the test pilot). The contours of the forward fuselage are not quite those of the X-1 but dimensionally they are 1/20 scale.