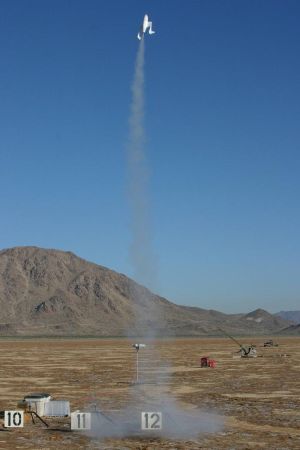 Brief:
This is a large scale model of Burt Rutan's Space Ship One, the X-Prize winner. We enjoyed watching the X-Prize develop, we have built the other X-Prize kits from Estes, so when the super sized SSO became available, we jumped on it. As you can imagine we were full of anticipation and high expectations for this kit.

Construction:
The components included in the kit are:

The instructions are easy enough to follow. The illustrations clearly indicate which parts are keyed and the orientation required for assembly. The Styrofoam parts were precisely molded and we did not have any trouble fitting them together properly.

Using silicone glue is novel for rocketry but seems to hold the Styrofoam pieces together well. The trouble with silicone is it's so sticky it just gets everywhere and is difficult to wipe up drips because they smear everywhere. Consequently, making nice beads and fillets takes a lot of practice and fooling around without making a mess. So go ahead, make a little mess, let it dry, and it will mostly rub off.

What seems to work best is to work carefully to make a consistent bead on one of the sides to be joined. The consistency is important because when you assemble and compress the parts together, the bead will squeeze the same way across the entire joint.

Probably best to get "paintable" silicone. The non-paintable stuff might be OK if you didn't want to paint the Space Ship One. Either way, white silicone matches the Styrofoam nicely.

All silicones take a long time to set up, so while each step is easy to do there is a long gap in between steps. Between that and painting, plan for several days elapsed time to complete the model.

The instructions warn about alignment when gluing the winglets on the tail booms. But the alignment isn't an issue because the parts fit nicely together.

The instructions do not say to paint the completed model, only the nose cone, but frankly after the tape damage, discoloration from extra silicone, and other incidental damage to the Styrofoam, it needs some kind of paint job.

The kit included stickers, not decals. The adhesive on the stickers grabs the Styrofoam and does not like to be removed and realigned. The top layer of cells of Styrofoam stick to the sticker and rips right off, which ruins the sticker's looks, the Styrofoam, and then the sticker won't stick any more.

Put a dot of dishwashing liquid in a bowl of warm water, run the stickers through that solution. Then while the sticker is wet you can reposition the sticker and get the air bubbles out. The Styrofoam doesn't soak up water so the sticker will slide around for quite a while.

The instructions say to paint red on the leading edges of all foil surfaces and a red stripe somewhere on the nose cone for the landing skid. The (paper) mask provided for the skid stripe does not fit the nose cone and won't work for masking paint anyway. We left the stripe off ours. We are not getting many scale contest points here!

For all the effort with the stickers, Estes should have included red stripe stickers instead of requiring a very difficult masking and painting job.

Not many paints are available that are considered "safe" for Styrofoam. Experienced Styrofoam modelers say they do not trust any spray paint brands because the propellant is volatile enough to eat the Styrofoam. We used Testors white because the guys at the hobby shop were interested in trying it on some packing foam pieces. The Testors primer and paint didn't eat the foam. Unfortunately it doesn't cover it color-wise either. So what, it looks great on the pad 30' away, doesn't it?

Construction Rating: 1 out of 5

Flight:
First flight was in beautiful calm conditions and mild temperatures. The rocket flew straight up, did a half roll, arced over just a little, coasted, and ejected almost exactly at the right time. The parachute tangled on the port boom and the nose cone led the way back down to earth, with the rocket in a flat spin. This landing broke the boom and that was it for the weekend.

We repaired the boom by inserting a long 1/8" dowel (actually a BBQ skewer) into both sections of the boom then more silicone to hold it together.

I guessed the winglets would eventually break, which is why I didn't want to try to mask and paint them. The port winglet broke off, right along the boom, just from traveling home in the car. This was fixed with a couple strips of "packing tape" which is actually tough mylar and an excellent adhesive.

It turns out from the first flight the parachute was slightly singed, and when I tugged slightly on the fabric it just ripped. The fabric is very poor quality. In fact, once the rip started at the singe, it continued all the way across the parachute. I found I could rip the unburned fabric by hand. Real rip stop nylon doesn't do that. It's difficult to imagine how the fabric got burned because there was unburned wadding in the motor mount tube, over the motor and under the parachute. What I originally thought was a decent quality part in the kit, turned out on closer inspection to be junk. Fortunately we had a 1/4 yard scrap of rip stop nylon so with 10 minutes cutting and sewing we had a new 18" parachute.

Recovery:
A model like this is caught in a tough situation because it's just too big for an E9 in any kind of wind, but it's too delicate for anything else. Someone told us they shredded theirs on an F12 which is actually a pretty gentle motor, barely an F by 3 newton-seconds.

Second launch was in 5-7mph winds. The booms and the stabilizer surfaces visibly fluttered this time, the model weathercocked badly and got no altitude, which made the 4 second delay of the E9 too low an altitude (about 50') for a safe recovery. However, the horizontal flight meant the model was moving fast at the time of ejection and parachute deployment. The nice long shock cord provided with the kit did its job and the model landed with no damage.

To get through the (mild) winds, it sure would have been nice to have the extra oomph of the F12. But after seeing the booms and stabilizers flutter like that, this model isn't flying any more at all.

Summary:
There is nothing nice to say about this kit except stay away from it. It is definitely not worth the list price ($65). Maybe if you found one for auction for $5 and didn't care about looks and flew in zero wind and got lucky with perfect flight profile and parachute deployment and landed in tall grass, and didn't break a boom or stabilizer from landing or transportation to and from the field... Even then, $5 is a lot. I'd rather have any of several $3 Styrofoam airplanes.

This review is very accurate. BUYER BEWARE!! I was lucky enough to be only taken for $50.00. As the reviewer states this model is cheap and flimsy. I agree even $5.00 is too much. This kit doesn't even make an attractive static model. I have yet to fly my model, but I am very reluctant to do so based on the finished product. As a loyal Estes modeler of many years I find I am quickly losing faith in their products. Cheap materials, poor engineering and HIGH cost will eventually spell the end of our once beloved Estes.

I was able to see two examples of this model as part of a model rocket display at the National Air and Space Museum's welcome weekend for the real SS1. The model is molded foam and is comparable to any of the current park-flyer RC planes on the market in construction. the price is about the same for what I paid for small foam electric plane kit (Hyperfly's BaE Hawk). The models were handled all day long by lots of people (adults and kids) and were picked up by the wings several times. Neither one was damaged in any way. One of the SS1 program managers thought the model was very accurate (pointed out small differences from the initial craft and what was modeled by Estes). It's not your typical model kit, so judging it by those standards doesn't apply.