I've enjoyed these little Quest MicroMaxx motor rockets since I can fly them in our yard. But not only that, it is rather interesting to make something this small fly. The only thing smaller that I have ever flown was a "match rocket". 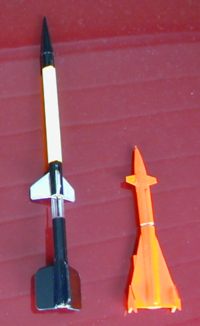 I purchased the Micro Jayhawk along with the Micro WAC Corporal with Tiny Tim Booster from ASP to build on a winter vacation. Notice the size difference between those two kits. I was pleased to see that even though these are "micro" kits they are in no way "micro" in quality. In fact, the ASP kit parts and instructions are of higher quality than a number of other "standard" kits that I have put together. I was impressed.

The instructions are on 5 pages of 8.5 x 11" paper and include illustrations as well as cutting and alignment guides. They are clear and thorough instructions telling the modeler exactly how to be successful in building and flying this rocket.

After sanding the outside of the body tubes to get the shine off, they are marked using a cut-out marking guide and a provided styrene angle. The styrene angle is a nice little provision for marking the tubes, but I found mine not quite rigid enough as I ran the pencil up along the edge. It was functional though and if care is taken would provide the functionality necessary. I found the marking guide to be missing "Tick Marks" which the instructions say should line up.

The various fins are cut out using fin cutting guides. It is recommended to use double-sided tape to keep the guide attached to the styrene strips. There are three different pieces of styrene fin material and different thickness. You are to cut the main fins, main fin tips, and leading fins from the various pieces. The styrene material is nice as it doesn't make the fins too thick in relation to the size of the rocket, but get your tweezers out to work with this stuff. Definitely follow the instructions and us CA for the faster setting time.

Like the WAC Corporal, the paper coupler is cut to size and is then used to hold both split lead shots with the Kevlar® shockcord tied to the bigger one in place in the upper-most part of the body tube. The nose cone is glued into place. The coupler sticks out of this upper body tube as the coupler for attaching the bottom section.

The lower connection of the Kevlar® shockcord is made by tying it to the remaining small piece (1/8") of cut coupler. This is then slid into the top of the bottom body tube and pushed down until it is 3/4" from the bottom. The 3/4" is set by using the second coupler. Once in place you drop in a couple of drops of CA and voila' you now have a thrust ring! I love it!

ASP instructions are thorough, but I already said that. Here they point to the fact that there is some finishing work that needs to be completed before finishing the rocket assembly. Read carefully and you will be successful.

One of the final assembly actions is attaching the nose fins. You carefully cut a slit in the wooden nose cone and then attach the nose fins to it.

After that the launch lug is glued onto one of the main (wing-type) fins and it is ready to finish.

I hand painted mine with Testors Model paint and a brush. I was okay with the finish, but you can see that it could be done much better if you took your time and followed the instructions. I didn't paint the nose tip black nor did I apply any of the provided water-transfer decals.

Overall, for CONSTRUCTION I would rate this kit 4 points. As with the WAC Corporal, the instructions, detail and material are outstanding. The paper template needs to have "Tick Marks". The same complaint exists, too; and that is motor retention. Quest does it with a twist clip. I've done it with a paper clip. I can't wait to see someone do it some other way.

The Jayhawk did not come with a streamer like the WAC Corporal. I can't imagine being able to get it into the upper tube any way!

The first flight zipped off the pad. I didn't actually see it until after the pop of ejection. Then it separated and fell fine. The motor kicked at ejection too and fell on the driveway next to me. Remember they are hot so don't rush over and pick them up! (no, I didn't)

The second flight was straight and fast. The rocket is so small that you should have help for spotting. I had my son helping and we recovered this one too.

For FLIGHT/RECOVERY, I would rate this kit 5 points. The use of Kevlar® is nice to hold up against the ejection charges. The attachment is nice with no outside connections made. The rocket appeared to be stable. I didn't see it fly, just know that it went straight up from the launcher based on where I saw it eject.

Overall, the Jayhawk is an excellent scale kit to fly in your backyard with MicroMaxx motors. It is fast off the pad but still trackable. The fin thickness makes it realistic in its size (proportions). It only loses some because of a slight mistake with the template and the friction fit of the motors, but in contrast with other kits, it has a thrust ring. I believe that a motor retention clip is possible and that is should be implemented. I give the kit an OVERALL rating of 4 ½ points.