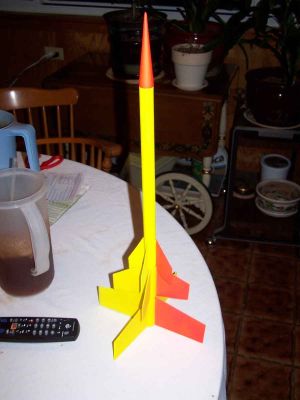 As a kid rocketeer, I knew of only two companies: Centuri and Estes. This was in the mid 1970s. As a very brief BAR in the early mid 90s, I could add Quest and LOC. When perusing the Semroc site, I saw that they had been around since '68. Thus far, I have been extremely happy with every Semroc product I have received and I've been even happier with their superb customer service and their support of my club.

I am interested, though, in what their line was like in the early days. When I buy a Semroc product now, more often than not, it is a recreation of another company's classic. I am extremely grateful for this availability but suspected that there must have been some things for which Semroc was well known. I wanted to know what those things were and posted a question to that effect on The Rocketry Forum. One of the answers I got back was had the link to a 1970 Semroc catalog. I was entranced seeing it but more entranced with a rocket called the Cyber III, which appeared only as a plan in the catalog. It reminded me of what staged rockets were like when I was a kid. I immediately wanted to clone it. Carl at Semroc was most helpful as were others who offered advice. 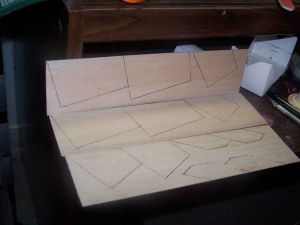 Construction:
The materials ordered for this rocket included:

I already had an assortment of launch lugs on hand and decided to go with a 2.5" long 3/16" lug. I forgot to order a thrust ring, but I was sure that was something I would find in my pile of stuff.

As usual, the order arrived quickly and in good shape. 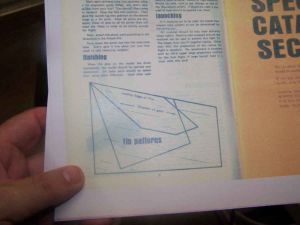 Hoping for the best as far as sizing is concerned, I ran off three copies of the catalog page containing the fin templates on cardstock. I then used an ancient guillotine style paper cutter to cut out one of each of the 3 different fin templates.

I then used the templates to transfer the outlines of 4 copies of each of the 3 fins to 1/16" balsa. Three sheets measuring 3" x 12" sufficed. I got 2 of the first booster and one of the second booster fins on each of 2 sheets. The remaining second booster and all the sustainer fins fit on the third. A steel ruler and razor knife were used to cut out the fins.

The balsa from which the fins were cut varied from fairly stiff to fairly delicate. I decided that instead of rounding the leading, trailing and outer edges, I would bevel them. Since this was bound to take a while, I decided to start on the double glue joint first.

I used an Estes guide to mark the 90 degree points on all three sections of body tube. A high tech door jam was then used to elongate the lines. I then ran a light streak of yellow glue along each of the lines and along the root edges of all the fins. I started with the root edges of the sustainer fins so that they would have a chance to air dry while I applied the glue to the rest.

With all the glue drying, I started sanding. I just put a simple bevel on each surface, running the 220 grit sandpaper back and forth about a dozen times before switching to the opposite side. Because of the differences in stiffness of the various pieces of balsa, some were sanded quite a few more strokes than others. The result will win no contests but does put me into the spirit of 1970, at least for me.

By the time all the sanding was complete, the glue was dry and I was ready to start gluing the fins on the sustainer. I took it one fin at a time, applied some glue to the root edge and then pressed it into place along the marking line. I checked it continually for alignment and then laid it in a cradle to set up. After giving each fin about 15 minutes, I would progress to the next one working in opposite pairs. Continually, I kept an eye on alignment.

The gluing of the second stage fins was handled in much the same way as the first stage except that I could not use the cradle. It contained the sustainer and the BT was too short anyway. I improvised by opening the jaws on my vise to form a cradle.

In order to have the vise available to serve as a cradle, all of the second stage had to be completed before I could begin the first stage booster. It was handled in much the same way for the first two fins but the third and fourth were more problematic. The fins on the first stage are so large that there is a tendency to droop. Fortunately, the root edge of the fins is the same length as the BT and the trailing edges are flat. That meant that the first stage could be set on its tail to dry.

Letting the glue joints on the fins dry and filleting them took some time. I used part of that time to fashion a recovery system. The two boosters are tumble recovery so there was anything to do for them. The sustainer though, was a mystery to me. The original instructions made reference to an "attach kit" which I presume was for recovery. I have no idea what the kit contained. I also don't know whether the kit was supposed to use a parachute or not. What I do know is that I intended to use a streamer. Recovery is going to be problematic enough at my field. Besides, the rocket is very light.

As much as I detest them, I decided to make a Estes style tri-fold mount since the minimum diameter did not leave me with many options. I glued a generous length of Kevlar into the tri-fold mount and tied an even more generous piece of sewing elastic to the Kevlar. I'll dig a streamer out of the box when I get to the field. The tri-fold mount was glued in place in the standard manner.

Nose weight was provided in the form of the biggest screw eye that would fit within the BT and a 1/4" nut. The Kevlar was tied to a length of elastic and that was tied to the screw eye. 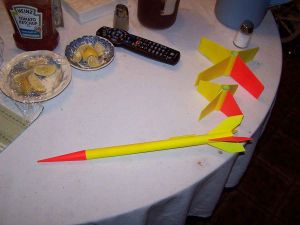 Finishing:
Finishing began with the application of Elmer's Wood Filler to all balsa. Then it was a matter of letting it dry and trying to find time to get back to it. When I did, it was a fairly humid day and I could tell the filler had absorbed more than its share of atmospheric moisture.

Sanding seemed to take forever. There is a lot of balsa on this little bird. Finally, though, it was ready to prime and I set it up in the booth. All stages were primed with white Kilz.

A few days later, as I was ready to start sanding the Kilz, I looked into the box where I had stashed the parts for some reason now forgotten. It is fortunate that I did so. I found the thrust ring and the launch lug, both of which I had forgotten to install. Oops.

I did not have a spent casing handy to install the thrust ring so I set that on top of everything else on my desk so I would have a marginally more difficult time forgetting it.

I sanded down the rocket and brushed away all the dust. I then took the 3/16" launch lug I had set aside for this project and glued it to the sustainer with CA. While that was drying, I sanded down the booster stages.

I had been indecisive as to what paint scheme I was going to use but finally decided on doing all three stages with fluorescent yellow and leaving myself open to doing something extra with the some of the fins and the nosecone. The first application of yellow was given to all stages and it was apparent and at least one more would be needed.

The rocket took three coats of yellow. It probably could have used one more but I ran out and figured it was good enough.

I masked off all but the NC and a single fin on each stage and then stared spraying with fluorescent red. This went on in only two coats.

I had planned on putting some decals on this rocket using the old Semroc logo. I went so far as to put something together in Photoshop. When I went to print it out though, I found that I was completely out of decal paper. I decided to go without. I did not want to miss a rare launch window at a field where I stand a good chance of getting all stages back and that window was only 40 hours away.

PROs: it looks retro (in the sense of my youth)

CONs: lots and lots of sanding 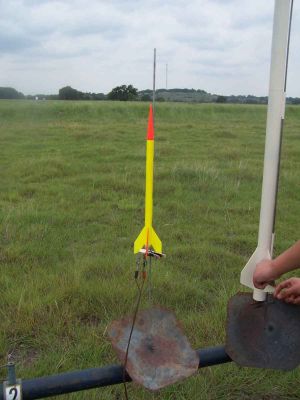 Flight and Recovery:
The day of the maiden flight was perfect. It was at the Amateur Rocketeers of Texas Freedom Launch. It was August but not too hot. There was just a hint of a breeze and the flying field was big.

I learned why this rocket is not seen too much. It flies a long way.

The first flight was just to test the sustainer. I put an A6-4 in and set it up on the pad. Supposedly, the Quest A6-4 is an 18mm motor but I had to put on lots of tape to make it fit the BT. When it launched, I was glad that Quest makes smoky motors. It really flew high. I was beginning to have doubts about the staged versions.

For the second flight I set up the two staged version. I used cellophane tape to join an A8-5 and a B6-0. These motors fit more snuggly and just needed a hint of tape to keep them secure. After calling heads up, I pushed the button and the igniter wasted itself without igniting the motor. I set it up again. I pushed the button. WHOOSH. It was gone.

I did get to see the staging. That was cool and the booster started to flutter down. My eyes were not up to tracking the sustainer though. It only had an A but it was practically out of site. Tim Reidy managed to follow it and helped me to reacquire it when it was a few hundred feet up. At this point, I was going to go for a B in the first of 3 stage configuration as well. 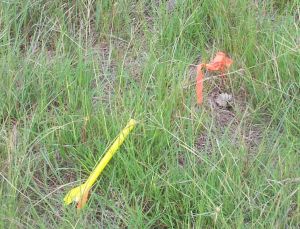 It took a while to find. I went well past where I though it landed and finally gave up. On the way back though, I saw the neon colors and recovered it. Unfortunately, it had lost a fin so its flying was over for the day.

CONs: 3 stage configuration should be considered a sacrifice to the sky

Summary:
I enjoyed putting this one together and will fix the fin. One of these days, I will find myself in a desert with lots of recovery area and will try the 3 stage configuration. That day is a long way off yet.