Brief:
McKibbon's Special is a futuristic, fantasy sport model whose plans were published in their Model Rocket News. The plans are available from Jim Z's archive.

Construction:
All parts are standard, easy-to-find items and materials. Except for the canards, which are 3/32" thick.All balsa parts are cut from 1/8" balsa stock. 1/8" dowels are needed for the antenna and 'laserdetails.

Although the plans recommend building the 'laser' details with launch lugs, I found that I could get better looking 'lasers' by rolling appropriate lengths and widths of kraft paper around sharpened 3-1/4" dowels.

Instead of an Estes PNC-50Y, I used a Quest PNC25 for the nose cone because I had one one hand. For the shock cord, I used 2-feet of a sturdy 1/4" wide cotton elastic. The shock cord was mounted with an oversized Estes-style shock cord mount cut from an index card. The 18" parachute was cut out of a black plastic garbage bag. The 36" shroud lines were cut from a roll of pure cotton crochet yarn. The engine block was cut from an expended motor casing. The engine clip was shaped out of a heat-softened, de-stressed bobby pin. Launch lugs were cut from drink-box straws. The tubes, however, are all standard Estes parts including a full-length BT-50 for the main airframe, 2.75" of BT-20 for the motor mount, and a couple of 1.5" BT-5 tubes for decorative engine nozzles.

The McKibbin's Special is rated as Skill Level 3. I feel that this is about right for construction, though the minimalist plans probably push skill level to 4.

Careful alignment is required for the rudders, the canards, and the 'laser' details. The look of the rocket seems to depend on symmetry, so misalignments would likely be pretty noticeable visually.

When everything is assembled, the rocket feels rigid and quite sturdy. I really like the feel of this model.

Finishing:
The plans provide no finishing suggestions at all. It's all up to your imagination. I smoothed the grain out of the balsa parts by using thinned "Shur-Patch Featherweight Spackle". This stuff is an incredibly lightweight spackle that gets the job done with one coat... and lots of sanding. I applied Krylon white enamel spray paint. I used a few sets of orphaned decals that I bought from a local hobby shop.

I really like the looks of the finished product. It has enough detail and interesting angles that it looks attractive when seen from many angles. It has a futuristic detailed look that harkens back to the old Centuri days. 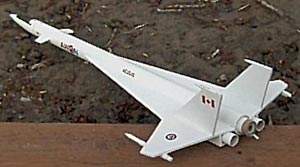 The McKibbon's Special flew straight up with no wobbles, swerves, or spinning. I was expecting it to curve toward the rudder-side, but this did not happen. The wind was gusting at about 10 to 20 mph, but no weathercocking was apparent. The model curved to horizontal and ejected the 'chute... a perfect flight!

Recovery:
The rocket floated down at a nice rate. Unfortunately, the 18" parachute caught the wind pretty good and drifted quite a ways from the launch site. The rocket landed quite softly in the stubble field. The McKibbin's Special was recovered with no noticeable damage or wear.

Summary:
I love the look and the flight of the McKibbin's Special. It's a real crowd pleaser. For the experienced modeller, this rocket is a nice, challenging project that promises satisfying results. The minimalist plans encourage the builder to use some imagination to produce a unique, personalized appearance. The look of the plans really don't do this rocket justice.

Required materials are very standard. Many of the required parts can be made out of household materials.

For the novice modeller, however, the plans don't provide nearly enough detail or instruction.

The 18" parachute drifts quite a bit on a gusty day. I'd recommend opening a spill hole in the 'chute to counter this problem.