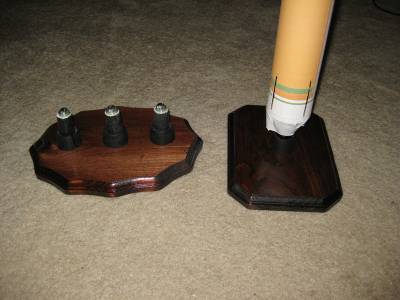 I got ahold of some of the 24mm stands. The version of the stands i received may still be in the prototype stage, but here are my thoughts:

The bases of the stands are wood, with routed decorative edges, and have been stained. The mounts, which your rocket's motor mount slides onto, are 2.25 inches long. The bottom inch of the mount is surrounded with an angled circular piece which mimicks the Delta IVs bell engine nozzle(s). A gap exists between the stands nozzle and mount, so that the motor mount of the rocket can slide down the full 2.25" length of the display stand mount. There is a slit running down the length of the engine nozzle portion of the stand to accommodate the motor clip of the rocket.

Three (for the smaller stand) or four (for the larger stand) red, white, and blue felt stars are attached to the bottom of the stands i received. I assume the felt was added so that the flat base of the stand can be set onto a non perfectly flat area without wobbling, and so that sliding the stand around won't scratch the surface of the area the stand is resting on. The red, white, and blue stars are a nice touch, even if you don't normally see the stars.

The added bell engine nozzles are a really nice touch.  Decorative, routed edges really add to the looks of the stand, and are something that would have taken me a long time to do if i had constructed the stand myself.

Nothing to really finish here.  The stand comes complete and stained.  You can remove the mounts that go into the rocket kits motor mount, and then attach back to the display stand.  The mounts are simply bolt and nutted to the stand.

Overall, the stands are well constructed, attractive, and a great way to display your DFR Technologies Delta IV kits. 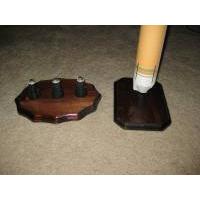