A two-stage rectangular rocket, made from a couple of toothpaste boxes, that resembles the Washington Monument.

I was brushing my teeth one day, and looked down at the empty toothpaste box, and thought "Why not?" So, the plan for Obelisk was born. I took 1/8" balsa and formed the nose, which is hollow, and the fins, which are solidly mounted to the body with ordinary white glue. I decided to use this rocket to test the strength and durability of foam construction board, so the baffle and payload section are constructed from the material. A 3' elastic cord ties it all together.

In order for the CG and CP relationship to work, I used a 25 peseta coin from Spain attached to the nose with a screw eye and CA. Why a 25 peseta coin? Well, it was the correct weight, and already has a hole in the center. And second, because it was just sitting on the kitchen counter. 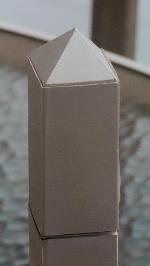 I wanted to keep it as simple as possible, but like most of my projects, it got out of hand. The puny 13mm booster motor could've been adequate if I had kept to the original concept of a lightweight, rectangular rocket. But then I added a baffle so I wouldn't need wadding, and the thing was at the ragged edge of what an A10 could lift. So, I decided to use a 18mm booster to get it moving, allowing the extra little bit of thrust from the A10 to nudge it a bit higher. 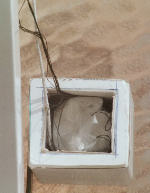 After it was all built, weighed, and tested, I decided that I could easily build a little compartment for the parachute to ride in. This was constructed by using a small "travel size" toothpaste box nestled between the end of the body tube and the baffle. A piece of 1/8" balsa was glued with white glue just above the baffle. Holes were drilled into the balsa to allow ejection gases out, and the shock cord was attached to this. The fins were flat mounted to the body "tube" with 1/2" overhang, which made plenty of room for my afterthought booster to attach to. 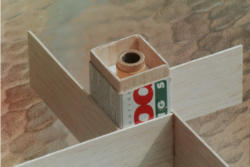 The booster was constructed from a 2" section of toothpaste box, with a 18mm tube in the center. The centering "rings" were made from the construction foam, which has proven itself to be a worthy construction material. Finally, a tubing coupler was made from 1/8" balsa. All corners of the fins butt against one another, making this rocket nearly bulletproof.

I decided to launch the rocket before painting the booster, since it would be wasted time if it failed. Instead of painting the rocket, I used a large sheet of self adhesive vinyl, which further strengthened the rocket. Unfortunately, it further weighed down the rocket! In testing, the booster tended to glide a bit, then the heavy balsa end would tip over, and it would fall like a brick. A 12" piece of Kevlar was attached with 30 minute epoxy just inside the coupler, and a 12" streamer was attached to the other end. Ample room between the centering ring and the end of the sustainer gives the streamer a good place to hide from the rocket exhaust. The result is that the booster tumbles somewhat, but still lands hard. Oh well, at least it's sturdily constructed. The sustainer's fins were covered in thin paper to hide the grain. the booster will receive similar treatment when it's finished.

Flight:
Launch prep is a breeze. Pop in a A10-3T, roll up the booster's streamer, insert a C6-0 into the booster, and attach the booster section. The 13mm motor fits right into the 18mm motor easily, but if the fit is tight, just roll the end of the 13mm motor on a table to round off the corners. Since the rocket was a lot heavier than I expected in the beginning, the minimum length launch lug wasn't up to task, and sheared off on the first flight. A much stronger launch lug was epoxied in place, and now it works well. The fins, which I feared would be too small, are just right. The shock cord is really strong, but will be a nightmare to replace if it breaks. This goofy idea of a 18mm feeding into a 13mm works well enough, but next time I would just go 18mm from the start and forget the booster. Flight characteristics? Well, let's just say that it works, and will land time after time without any damage. But if you love altitude or speed, you won't find either here. You could probably fly this rocket without the A10-3T and do just as well.

Summary:
Pros- bulletproof construction, unique design, and definitely an attention getter. Proved that construction foam is a viable component for rocketry. Cons- heavy, thin "dry cleaning bag" parachute rips easily at the shroud line, low altitude performance, and the pyramid nose would've been a lot easier to build from a solid piece of balsa, and no nose weight would've been required. Oh well, at least I learned a few things.

It's definitely worth it to cover the fins with onion skin paper. Makes for a neater appearance, adds durability, and on a higher performance rocket, would probably add some altitude.

I have been revisiting my old rockets that have been wasting away in the basement. I put a C6-0 in the booster and a really old A10-3T in the upper stage. It boosted straight and true to about 100', then the A10-3T flew through the rocket. The nose cone popped off while still ascending, and the sustainer motor burned through the body. It all crashed in a smoldering heap just a few feet from the launcher. The booster is intact, but other than the nose cone, it's junk. I might rebuild, I don't know.