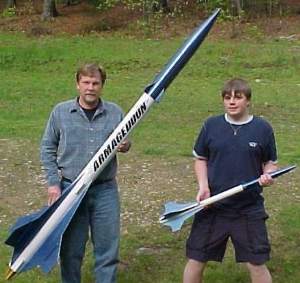 Brief:
I liked my DG&A Armageddon so much that I wanted to build a smaller version that I could fly with my kids up at the school. I started with some Estes BT-60 body tubes that I had leftover from another build. The original Armageddon has a 4" body tube so that makes the BT-60 a 0.4 scale or 2.5 times smaller. 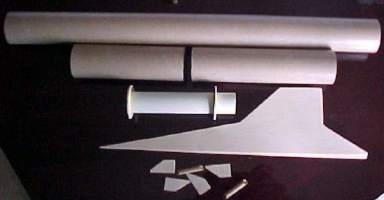 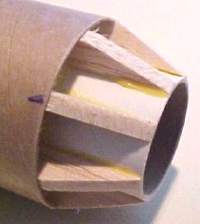 I used a 24mm engine mount made for the Estes E-9 engines because it's a longer tube. I chose not to use the engine hook and this enables to fly it on Estes D12's and Aerotech E motors also. Tape must be used for a friction fit on the motor if the engine hook is left out. Glue a centering ring to the end of the motor mount tube. Glue the second centering ring to the MMT 7/8" from the other end and allow to dry. Glue this assembly into the airframe so that the aft centering ring is 1/8" in the tube. Cut the balsa stick into eight 1" long pieces. If you want, you can just make them from scrap leftover from making the fins. This is how I did it. These pieces will make the finned tail cone. Glue the eight pieces to the MMT so that they are evenly spaced and touch the centering ring. This will make them 1/8" into the BT. I used 60 grit sand paper to taper the eight tail cone fins from the BT to the MMT. It took all of ten minuets to sand them to ! the taper. Finish them with 120 grit paper. 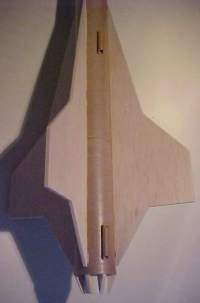 Here is the hard part. You will need to do one of two things; download the RockSim file I made for the original Armageddon to get a fin template, or try to use the fin template jpeg. Just use the given dimensions and multiply them by 0.4 inches. You should end up with the root edge being about 12.5" long. I used Bud Nosen 6"x 32" x 1/8" A problem you will find here is that the grain of the balsa will be parallel to the BT. This makes for weak fins. Paint a coat of CY or epoxy to strengthen the fins. If you use CY, make sure you are in a well-ventilated room or better still, do it in the garage. Some people glue paper or cardstock to weak fins to strengthen them. This works well and cuts down on finishing time but it will make this rocket too heavy to fly on the Estes E motors. Make four fins and glue these so that the trailing edge of the root is 1/8" from the end of the tube. Make sure they are lined up with four of the tail cone fins.

These are much simpler to make. Using leftover stock from the fins cut out four fins to match the canards in the template jpeg. Glue them to the forward "payload section" so that they are flush with the end.

I chose to use the Estes way of mounting the shock cord. The other end of the shock cord is just tied to the nosecone before it is friction fitted into the payload section. I used a 20" Aerotech parachute.

Finishing Touches
Cut the tips of the two 3/16" launch lugs at a 45-degree angle. Glue one at the aft end of the rocket and one just behind the forward edge of the main fins.

Finishing:
I chose to paint the finned tail cone gold but (obviously) paint it as you wish. Paint the fins, payload section and nosecone blue and the rest of the body white.

Flight:
Flights I have flown this rocket at least two dozen times. Most flights have been on a D12-5 but recently I've been using the new E-9 motors. Two successful flights have been made on the Aerotech E30 and two on the E15. All flights, like the original Armageddon, have been straight as an arrow and impressive.

Summary:
The only minor problem is that the 24mm MMT is larger in proportion to a BT-60 than the 38mm on my original Armageddon is to its 4" BT. The fins can be hard to make if you don't have the originals to model them after.