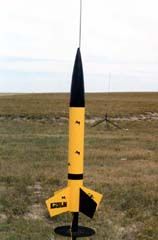 I was looking for a good candidate for my first scratch-built upscale project, and after a little bit of looking around on JimZ's rocket plans site, I considered the Estes Goblin. Is it just me, or does this little rocket just beg to be upscaled? I know it's not a terribly original idea, but it seemed well-suited for my first upscale. I got even more inspiration for doing an upscale of this particular rocket while browsing Yitah Wu's rocket web page (link-out dead). The scale factor of 3x was a perfect match for the 4" body tube. After deciding on the scale factor and choosing an airframe size, it was just a matter of ordering all the parts to build it.

I measured the original Goblin and came up with 27 inches for the main airframe length. I marked the tube and carefully cut it with a sharp X-Acto. Then I cut the motor mount/stuffer tube to 18 inches. I drilled the aft centering ring for "Kaplow Klip" motor retention and installed the t-nuts, then I drilled two holes in the forward centering ring and installed the U-bolt I'm using for the shock cord anchor. I marked four lines at the aft end of the airframe tube for four fins, then I marked four more lines offset 3/32" from the original lines for the fin slots. I slid a couple of centering rings into the tube to support the inside of the tube while I cut the fin slots.

I got the fin pattern for the Goblin from JimZ's web site, which I also used to make my normal-scale clone. I loaded the pattern into Paint Shop Pro and enlarged it by a factor of 3. I cropped the fin section of the image and printed it out, then used the cutout to mark the plywood for the fins. I added a tab to the leading edges of the fins large enough to reach the 29mm motor mount tube. I cut out the fins on my dad's radial-arm saw and rounded the leading and trailing edges with a block sander.

Then it was time to start epoxying stuff together. With my first batch of epoxy (Bob Smith's 30 min. cure), I attached the forward centering ring to the motor mount tube. I carefully measured for placement of the middle centering ring (I wanted it in just the right place so the top edge of the fin tabs would rest against the underside of the centering ring) and applied a generous fillet to the forward joint only. Then I dabbed some epoxy on the nuts that held the U-bolt, and some on the t-nuts. I did not attach the aft centering ring at this time. 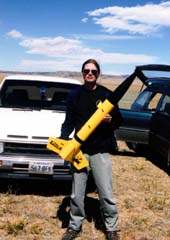 After letting the motor mount assembly cure, I placed a large bead of epoxy in the airframe about where the forward C.R. would be. I slid the assembly part-way into the airframe and applied another bead of epoxy where the middle C.R. would be. Then I slid the motor mount assembly the rest of the way into the airframe. After the epoxy had set a bit, I added a nice fillet to the front C.R. where it met the airframe. I did not add a fillet to the rear of the middle C.R. because that would've interfered with the fin tabs.

Next, I installed the fins one at a time. I used a little CA to hold each fin in place, then after the CA set, I applied good epoxy fillets on the outside fin/tube joints, the inside fin/tube joints, and the inside fin/motor mount tube joints. After all the fins had been attached and the epoxy cured, I epoxied the aft centering ring into place. When I was done, I had a completed airframe/motor-mount/fin assembly. The last step of the major construction was adding two pieces of 1/4" launch lug to the airframe, each 3" long. 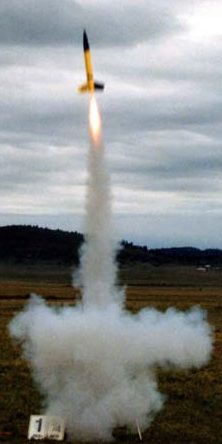 Finishing was fairly straight-forward. Two coats of Krylon primer, followed by two coats of Rustoleum yellow on the body and Wal-Mart black on the nose. The Rustoleum required a full 24-hours to dry before I could mask off a fin and paint it black, as well as the stripe around the body just above the fins. After all the paint was dry, I applied the decals I got from Tango Papa. The finished rocket is really sharp-looking. The final step was attaching the parachute and shock cord.

If you make an upscaled Goblin based on my construction, be sure you use motors with short delays. On the first flight of my Goblin, I used an F40-7, and it was almost a disaster. It flew much slower and lower than I'd expected, and resulted in a low-altitude, high-speed ejection that, fortunately, resulted in very little damage. I'd recommend flying it on: F40-4, F52-5, G33-5, or G64-4. These are all Aerotech 29/40-120 reloads. The Fs should take it to about 800 feet, and the Gs should boost it to about 1,200 feet, maybe a little more.

The picture above shows one such launch. I prepped an H128-M for my Goblin. This would be her fifth flight, and the largest motor she's flown on yet. Since the wind was starting to pick up a bit, I replaced the 36" inch 'chute that I usually fly in her with a bright yellow 30" 'chute. I didn't really feel like chasing her over the hill. She lit right away, and tipped slightly to the left of the pad as she took off. Ejection was right at apogee, and she floated down a bit faster than I'd like on the smaller 'chute. At least she didn't drift far, landing about 100 yards from the pad. I could tell she hit the ground a bit hard, but when I retrieved her all I found were a few extra scratches in the paint.