Brief:
Silver Comet XL - My Silver Comet kitbash project began with someone else having a bad bit of luck. An unknown party at a DARS launch (de Anza College, Cupertino CA) in early 1998 launched a Silver Comet with an Aerotech E motor. Maybe the motor had too long a delay. Maybe the parachute was packed too tight. In any case, the model took a nose dive into the unforgiving DARS' "AsphaltDrome." I didn't witness the crash. I did see the unlucky owner tossing the kit into the trash. Yes, I admit it: I salvaged the kit from a trash barrel. My kitbash project started with a bashed kit. You, of course, can do this kitbash on an existing Silver Comet, or one you build from a kit. No crash necessary. Aside from the totally mashed cone, and 3" or so of crumpled body tube, the unlucky space yacht actually looked in pretty good shape. I decided to do something *cool* with it. Not right away, as it turned out, but after a year and a half in a box, I took a second look at the model and began to plan. On my to-do list:

Modifications:
Before gluing on the coupler and extra tubing, I carefully peeled off the transparent self-stick decals and stuck them on wax paper. They were in fairly good shape. Waste not, want not! Since the original shock cord mount was lost in the crash, I built one into the coupler using the old "double slit" method. I used a few inches of Kevlar thread as a leader, and about 3' of 1/4" elastic band as a shock cord. The fins of the crashed model were in OK shape, but I never really liked the shape of the things. They don't look like Olde Fashionede space ship fins. Rather than remove them, I simply added pods to their tips! The pods are made from three teardrop-shaped pieces of 1/8" balsa, glued together into a stack and sanded to have nice round edges. The middle layer has a roughly triangular shape snipped out of it, so that the finished pod could be slipped over the existing fin tips.

Construction:
If you start with an intact kit, you won't have to worry about the first step! The replacement cone (with molded cockpit) is not a standard part, but at the time I did the project Estes did make it available through their customer service line. Shipping was inexpensive and fairly fast. Parts for the second step were easy to find. I purchased a pack of Estes BT-80 tubes and a coupler (from the Large Coupler Pack) from a discount distributor. I added a total of about 4" to the front of the model. (In my case I needed more tubing than that, to replace the crumpled tube.) 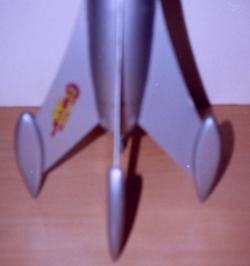 Re-finishing the Silver Comet was a real chore. I thought at first that I'd preserve the original paint job and just paint the fin tips and new body tube section. But after sanding, sealing, spiral-seam-filling and spraying the new parts, the contrast between new and old was too obvious! I ended up sanding and priming the old parts and doing what I could to fill the fins. The result was pretty good. I was never good at achieving "chrome" like silver finishes, but after buffing and a few coats of Future floor wax the finish looks really nice. Sort of a "silver plastic" effect. When the paint was dry, I reapplied the decals. The original kit calls for the "portholes" and hatch to be placed on one side and the logo decal on the other. I decided that this was too unbalanced looking. So I called Estes Customer Service and tried to order another set of decals. They refused to sell me one . . . they sent me one for free! God bless 'em! I placed the new set of porthole and hatch decals on the port side of the ship, and the logo detail along the top. As a finishing touch, I used dark blue acrylic paint to color in the center of each porthole and the hatch's window. The result is an amazing improvement over the original look. (If you've got a Silver Comet, try it!) I tried painting in the cockpit windows, with limited success. I eventually settled on using pieces of blue Trim Monokote. This wasn't much better, and took a lot of work. I think I'd try harder to get a good paint finish if I had to do it over again.

Flight:
The Silver Comet XL made its maiden voyage at the August 2000 LUNAR launch. I used a D12-3 motor and a two standard 24" Estes plastic parachutes. The comments I got from the launch volunteers and people on line for RSO inspection were very ego-boosting. The launch was a great success, too: The model was very stable, perhaps due to the pods acting as "drag members" far aft of the center of gravity. The parachute ejected near-apogee and landed safely.

Summary:
Although finishing the kit was more work than it should have been, I had fun with this project and really liked the results. Although officially out of production, you may still be able to nab a Silver Comet kit from hobby stores or webstores. Go for it!

Other:
The only problem I've encountered with the model: The soft balsa I used for the pods tends to crunch easily. I've made lots of dents in them in normal handling. Having used harder balsa, and perhaps a coating of epoxy, might have made them a bit sturdier.