Diary of a Contest Rocketeer:

3-26-08: Here are my parts. Not much for large nose cones, but looks like I can make something up if need be. 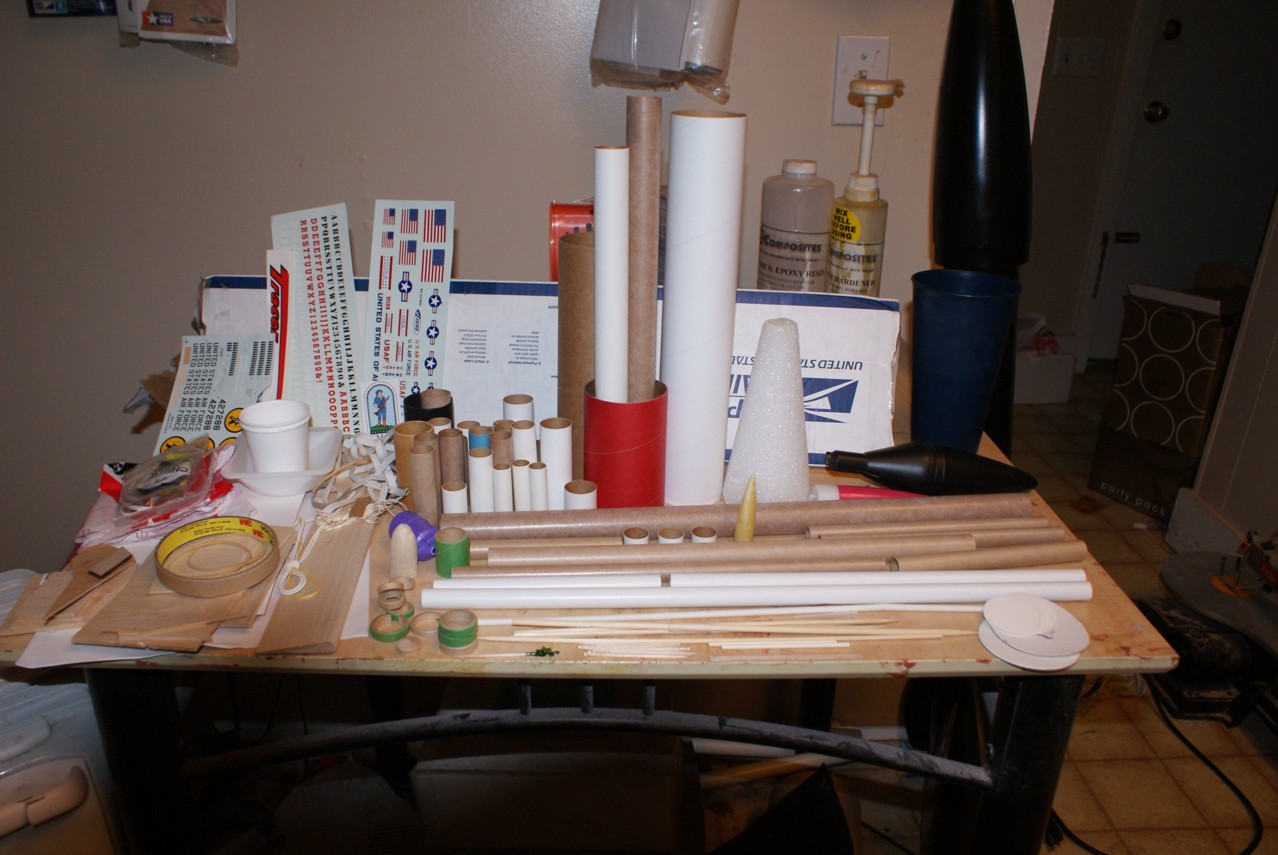 3-27-08: There was about three sheets of paper inserted in the box when I got it. Now I can't seem to find those sheets.

3-31-08: I found those sheets of paper I misplaced along with another tube coupler/tube and a mixing cup... do I have to retake the picture of all the parts?

5-24-08: Just wanted to mention that I started building my contest entry . Was kinda hoping for longer 18mm tubing, but I'll make due with what I have. If I can make it stable with the length I have to work with, this may be a two stage rocket.

5-27-08: Pretty much finished building my entry. Going test fly it this weekend unpainted.

Question: Just went over the rules again and it said good photos of build process. I hope illustrations qualify for that because thats what I was doing ><.

I thought about taking photos of the build.... but my cheap camera is broke, and I did not want to get glue, paint, etc on my expensive gear.

5-29-08: Well, Construction of my entry has been complete. I wanted to get in some test flights at todays CMASS launch, but that has been postponed till Sunday, and I can't make it after church... so since the next CMASS launch I will be able to go to is not until after the contest deadline, I will have to test it on my own.

I am going test it as a single stage configuration first. Probably with a B6-4. It has an unique fin configuration, so I like to see how it behaves before I try it with the booster.

5-31-08: Minor setback - While cleaning up I "bumped" the rocket and crimped the main body tube and sent one of the details flying across the room. The Crimp was easily fixed by splicing the tube, inserting a tube, and gluing them back together. The detail was like finding a needle in a haystack, but I found it after searching high and low.

6-01-08: Much to windy today to test fly my creation. Maybe tomorrow if I have time.

6-03-08: Got the test flights done. I First I flew it single stage with a B6-4. Good flight, did not get very high. B6-2 would be a better choice. Second test flight was in its two stage mode. B6-0 and B6-4 was used. Perfect flight but I did not get a picture since the guy pushing the button failed to do a proper countdown ><. Today I started writing the documentation. Will paint my rocket soon .

6-17-08: Had an issue where the Krylon black reacted to the humidity and fogged up. I am painting rust oleum over it, I hope it does not have a reaction . My Drawings for my rocket are almost done, so that means I will have the documentation done soon . Weather is forcasted to be poor all this week, so getting a in-flight picture before the deadline may be an issue.

BTW, requiring an in flight photo shouldn't be a requirement. For me, the next launch where I can fly it on larger motors won't be till after the contest is over, so that means I have to fly it at the local park, which limits me to B6-0 in the booster, and I only got one left. And its hard to take a picture and launch the rocket at the same time, and its hard to get someone to help . So If I miss the shot, I don't have any more B6-0's, which limits me to C6-0's which I will loose the rocket, or A8-0's...

I got a shot of the unpainted test flights with it single stage on a B6-4. Would that count? I also flew it two stage, but the helper did not know how to do a proper countdown and I did not get a launch shot of it in two stages... The painting and detailing will be done this week, just at the mercy of weather to get a finished launch in before the deadline (which for me is the 27th, cause I am leaving on vacation and won't be back till way after the deadline).

6-20-08: My rocket is finished . I think my paint scheme came out extremely well. Now I need to finish the documentation...

Two stage rocket design which is my entry for the "Box-of-parts" design contest.

The parts for this rocket was limited to whatever parts were present in the Priority mail triangle that I got. Upon opening the box, I noticed there was only a limited number of large tubes, and a large collection of smaller tubing. Also lacking was amount of quality of good sheet balsa, shock cord material, launch lugs larger than 1/8" or parachutes larger than 12." Poking around I noticed I had a Custom Eggloft cone, which I decided right off the bat I wanted to use. I also noticed I had a 2" wide strip of aileron balsa stock. I wanted to use that to. There was also quite a collection of BT20-50 centering rings which I decided would be used for detailing.

Now the challenge; design a rocket worthy of placing as high as possible in the Box of Parts contest using the materials I have at hand. I had to design a rocket that was light enough to be safely launched from a 1/8" launch rod (although I could make larger LL with the paper included) and recovered safely from a 12" parachute with a typical rubber shock cord.

After drawing several designs, I finally came up with a basic plan that I liked. I thought about laying out the design in Rocksim, but decided against it because Rocksim does not handle "Tail-Ring" designs well. I did end up using Rocksim to help determine what span the Pylons need to be so I could create the templates. For the most part, building the rocket was easy. However, gluing the fins made from the aileron stock was a bit tricky to align properly, and gluing the tubes on the tip was even more challenging to get aligned right.

To finish the rocket, I used Bondo Glazing and Spot putty to fill in the joints between the aileron fins and the tubes. Then I applied several coats of Rust Oleum Light Gray Automotive primer, sanding between each coat. Once I was satisfied, the rocket was sprayed with a base coat of Gloss White. Then the Fin Tip Tubes and the center ring of the nosecone was painted Red. The top section of the nosecone was then painted Yellow and the Base part was painted Black. Using a small paint brush, the Guns were painted Black, and the missiles was then detailed with a Silver nose, and the tail end Silver, Red, and Black. 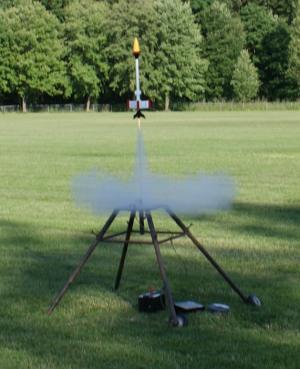 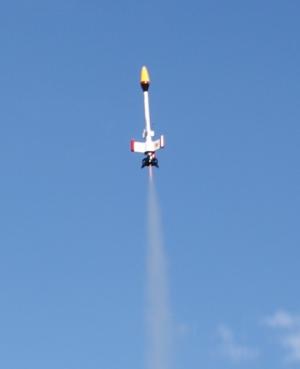 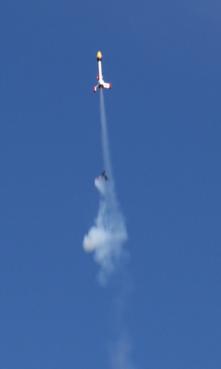 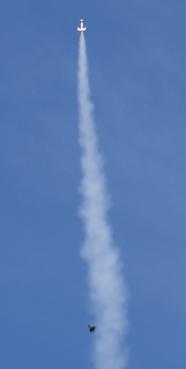 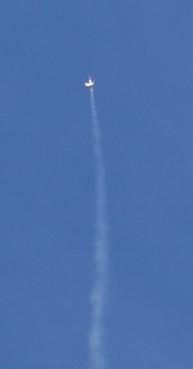 So far the Avenger was flown three times. First time I launched it with a B6-4 in the single stage mode. The rocket did not go as high as I thought it would, so the 4 seconds was to long but the parachute did deploy in time. A B6-2 would be a better choice for a single stage B motor flight. The second flight was in two stage mode. A B6-0 in the booster, and a B6-4 in the sustainer. Great Flight and I was happy to see that a 12" parachute was the perfect chute size for this rocket since it gently drifted towards the end of the field and landed between two trees.

The most recent flight was a two stage flight with a B6-0 in the booster and A8-3 in the sustainer. It was a perfect flight and recovery. One of the Guns peeled off a layer of paper, but I do not know if that was damage from recovery or handling. 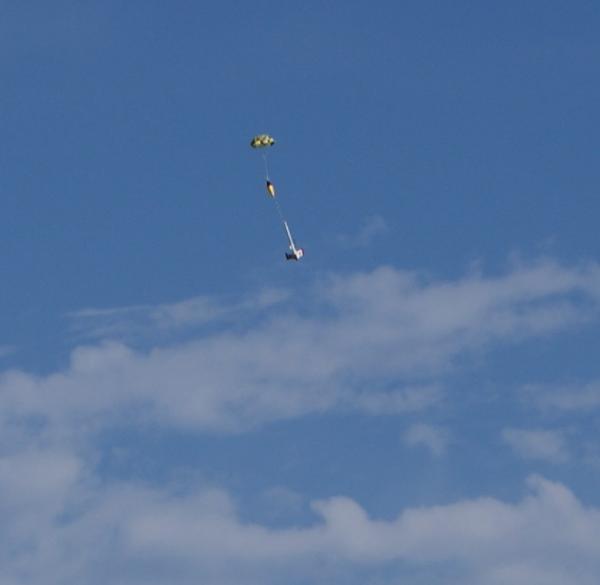 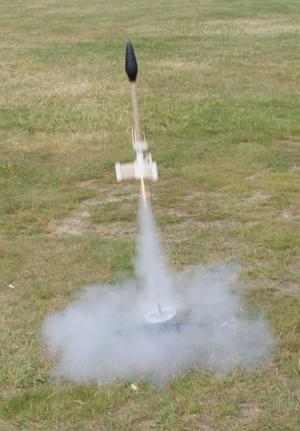