Brief:
A D-powered scale like model of the Aggregate 9 rocket from Das Modell. Purchased from eBay, it came in a cardboard carton and looked to be an interesting rocket to both build and fly. I was interested in this rocket as I had never heard of it before, unlike the A-4 V2. The internet yielded some information:

The A-9 was only half of a A-9/A-10 multistage rocket, capable of crossing the Atlantic Ocean. The rocket was envisioned in 1936, when yet-to-be built propulsion testing stand in Peenemunde was designed to accommodate engines with the thrust up to 200 tons; eight times more than needed for the A-4, but roughly enough for a transatlantic rocket. The A-9/A-10 was far ahead of its time, by a dream of the Nazi government to bomb America. To reach New York, the A-10 upper stage, would have to follow a string of radio-beacons based in subs across the Atlantic, finally the rocket would use a transmitter installed by a Nazi agent in America. A piloted version of the A-9 stage was also planned. The concept of the A-10 rocket envisioned a version with a propulsion system made of 6 combustion chambers, similar to those on the A-4 rocket, but feeding a single nozzle. It could carry an A-4b-type rocket as its second stage, before the A-9 was ready. Like the A-4, the initial A-10 would burn mix of liquid oxygen with alcohol. Peroxide-driven pumps would be used to feed combustion chambers. If given time for implementation of the project and combined with German nuclear ambitions, the A-9/A-10 could have turned into a weapon of mass destruction in the hands of the Nazis. The complexity of the rocket and immediate prospect of losing the war, forced Peenemunde leadership to abandon the far-fetched idea in 1943. Instead the A4 (V2) remained the focus. 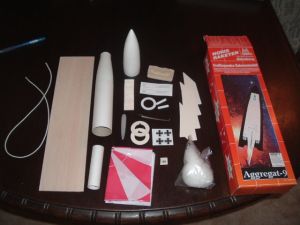 Construction:
This was the second Das Modell rocket that I have built, and like the previous rocket (Hummell), the instructions were in German and generic.

To build the aggregate-9, I used:

The kit, although sealed had the body tube and the plastic boat tail section already glued together, I assume that as I bought this off eBay, that the kit had been started. Unfortunately this made the motor mount assembly much more difficult.

The instructions are generic to all Das Modell rockets, however, there were a few extra sheets that showed the paint scheme, and from these the construct can be worked out.

I did make one stupid error, in the generic German instructions the motor mount clip is attached in the standard way, and I followed this. As the model has a boat tail, the motor sits flush with the base of the boat tail, so there is no room for movement of the clip to allow the motor entry. Fortunately, the mount is for the German D7-3 motor, as this motor is 25mm in diameter, the smaller Estes 24mm motor is just able to squeeze past the clip, but in the end I decided to cut the end of the clip off and go for friction retention. If I were to build this model again, I would omit the clip.

The motor mount is aligned by the boat tail and a centering ring, so it was hard to glue in the mount because of the body tube that had been already glued in place. In the end I ran some thin CA glue inside the tube to hold the rings in place. Later on I used a bit of epoxy on the end of a stick to add a fillet.

There was no engine block supplied with the kit, and as the mount is too big for 24mm motors I was worried that the forward end of the clip would be insufficient so I added a thrust ring. 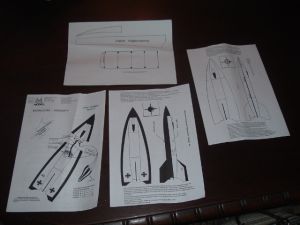 The fins, which run the entire length of the rocket, need to be hand cut from the balsa sheet so a template is provided. After cutting out the template I discovered that the template is the wrong size for the rocket. The fins need to be extended by ¾ of an inch. The two side fins are supplied as fiberboard. These fins did not fit flush with the boat tail and body tube so I cut out new ones from the balsa.

These were glued on with bostic and then triple filleted with PVA glue.

The fins on the nose cone need to be carefully aligned with the body tube fins.

The canopy for the nose cone was CA glued into place, and the two launch lugs were trimmed to 45 degrees and glued into the joint between the body tube and fin.

The instructions don't give any clue to whether or not the fins have the edges sanded to a point or not. (Well they might, but I don't read German.) I decided to go for a rounded end.

Finishing:
The body tube had a huge spiral groove, which I ended up filling twice with PVA glue then using sanding sealer on the tube and fins. It took 4 coats to get anywhere near a smooth finish.

I used PlastiKote paint to go for the paint scheme given on the instruction sheets. The art on the box and the sheets differ slightly.

The final finish was not great as paint seeped under the masking tape in places.

Flight:
The German motors for this rocket are 25mm, so I had to wrap a few layers of masking tape around a D12-3.

The flight was strange. The A9 flew straight up to about 300 feet and then went very unstable, looping and twisting all over the sky. It eventually came back to earth via its parachute. A member of my club commented that he was glad that it went unstable up there and not closer to the ground-–I could not agree more. I doubt that I will fly it again.

Recovery:
Recovery is difficult to judge--I swapped the bin bag chute for a 15 inch nylon cone chute. It recovered at a reasonable rate.

Summary:
This was my second Das Modell kit and it will be my last. German engineering does not stretch to the model rocket industry.