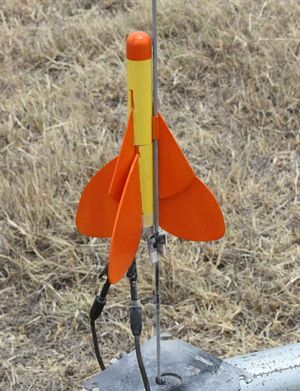 Brief:
The PeeWee is a little two stage rocket designed by Tom Rhue and featured as the Estes Design of the Month for October 1961. It stuck me as "primitive" and I do not mean that in a derogatory manner. As someone said on YORF, it hearkens to a day when the hobby was being made up as the modeler went along.

I decided to try and build it and promised I would post the build thread on YORF. It seems a fitting place for this venerable design.

Construction:
I immediately surmised that I would be ordering my parts from Semroc and took a look at the instruction to hit my first roadblock. They call for BT-3 tubing. This was one I had not worked with before. The only distributor I found for BT-3 was FlisKits (I like their stuff too), but then I realized I was in the MMX department. I checked the diameter and realized that there was no way I was going to fit an 18mm motor into the FlisKits BT-3. So it is that I posted a message on YORF asking for help. The kind folks there soon gave me an answer I could use. The archaic BT-3 of Estes was still available as the Semroc BT-30. That being the case, I place my order and had it two days later. 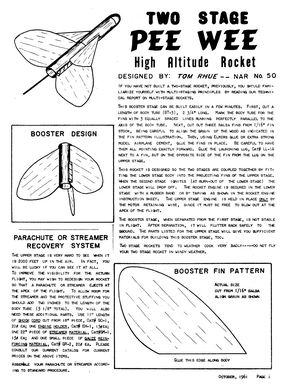 After getting the parts, they sat in the box from 5 Nov until Christmas Day when I finally had time to get started. When I did get started, I found a simple but fun project to occupy an afternoon.

The sustainer body tube was supposed to be 3.125 inches long. I had ordered a 3.25" as the nearest fit. In looking at the directions, there seems to have been some play with this length. If you wanted to build a version that used streamer recovery, a tube as long as 5.5" was recommended. I decided the 1/8" was not going to hurt me. That being the case, the first step was to glue on the nose cone with yellow glue.

While the nose cone was drying, I cut out the fin template and laid it on my 1/16" balsa stock and traced around it with a pencil. I then copied the pattern twice more making sure the grain was aligned as indicated. An X-Acto knife was then used to cut the fins out.

An Estes fin marking guide was used to mark the body tube for 3 fins and the tick marks were extended using a pencil and an angle. The template had a mark to establish how much of the fin fell below the BT and this mark was transfered to each of the fins. The fins were then glued in place with yellow glue and a double glue joint.

As the sustainer dried, I turned my attention to the booster. It called for a 2.75" length of BT-30 and I did have one the right length. I marked the fin lines as before and cut out the booster fin template. The outlines were transfered to the sheet balsa and the fins were cut out. These were more difficult because of the curves. When I was done, I had to stack the fins and "regularize" them with some judicious sanding. The fins were then glued onto the booster tube in the same manner as the sustainer.

As I was posting this project as a build thread on YORF, somebody noticed that the grain on the fins was running the wrong way, parallel to the BT, in one of the photos. When I took a good look at the rocket, I saw that the grain is running the wrong way. A closer inspection of the template revealed that the tick mark for placing the fins was indeed on the surface I used but looking at the artwork, I saw that the template was in error.

An X-Acto was used to slice the fins away as closely as I could come to the BT. I intended to make new fins but I wanted to see how close I could get. When they were off though, I decided that they were perfectly serviceable and decided to reuse them.

The correct distance was marked off on the real root edge and the fins were reattached to the BT. The result looked better and hopefully will not shred the fins. 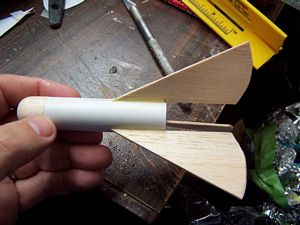 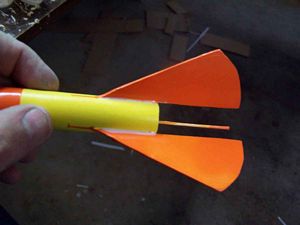 Finishing:
Finishing was done separately on the booster and sustainer because I had to go back and redo the fins on the sustainer. The booster was done first.

I brushed Elmer's Wood Filler onto the booster fins and then tried something new I learned about on a new website. I took a razor blade and scraped off the excess. This led to a couple of happy results. The filler was much thinner so it dried much more quickly. I waited overnight but I could see the first fin was fairly dry before I had finished the third. The second nice thing was the resulting uniformity. Only a light sanding with #400 was needed to be ready for primer.

I primed with Kilz. Two coats were applied and the primer was allowed to dry. The next day, the sustainer was ready to be primed and it got 2 coats of Kilz as well.

While sanding the primed stages, I noticed a perennial mistake of mine. I had forgotten the launch lug...again. I scraped off a bit of primer and glued it on, giving it a chance to dry.

When the lug had dried, I painted the BTs of both the sustainer and booster yellow. The yellow was given a day to dry and then the rocket was masked to paint the NC and fins of both stages orange. Then it was just a simple matter of spraying the orange on each stage.

The final result was bright yellow and orange and, I hoped, easy to see way up there.

Flight:
At least a half a year after I first got started on this one, it finally made its maiden flight. It had been taken out to fly before but always something went wrong. This time, it would fly. 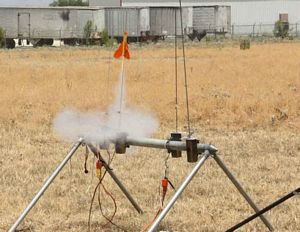 To start things off, I wanted to try just the single stage configuration with just a 1/2A6-2. I wanted to see how it would behave. I had spotters ready.

It took off fine and disappeared to most people. It was reacquired when we heard the motor pop. The motor landed a few feet from the flight line but nobody saw what happened to the rocket itself. We looked for a while and gave up and I thought I would be rebuilding the sustainer. Near the close of the day, though, somebody found it while hunting for a mid power rocket. I decided not to fly it again on that field. A video of the maiden flight can be seen here.

I got tired of waiting for the A8-0s to come back so I decided to go ahead and give it a try in the 2-stage configuration with a B6-0/½A6-2 arrangement. I taped the motors together with cellophane tape and loaded them into the rocket. The rocket was then taken to the pad and hooked up. I asked all present to help with the tracking. On ignition, it started scooting and looked pretty good doing it. Everyone saw the staging and the booster tumbling back to earth but the sustainer was never seen again.

CONs: It was not recovered.

Summary:
This was an easy rocket to build. I had my problems with it but they were my problems. It also flies well...too well. Without a smaller booster motor available, it is likely to be lost, as mine was. Even in the single stage configuration on a 1/2A, it really moved.

I will be rebuilding the sustainer but will make some modifications, lengthening it to include a streamer.