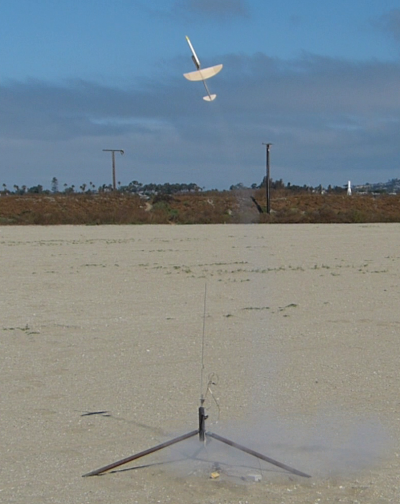 Boost gliders have a long and not completely successful history as kits.  Early Estes gliders included the Astron Space Plane, Falcon, and Nighthawk, but these soon gave way to a series of kits better known for their interesting appearance than their great glide characteristics.  Larry Renger's invention of the pop-pod configuration in 1966 came to dominate competition, but there have only been a few pop-pod kits, notably the Centuri Swift and (briefly) the Estes Dragon Fly.  In the early 2000s Estes offered the E2X pop-pod Eagle, which had the glide characteristics of a styrofoam meat tray with a fishing sinker on it.  John Boren's introduction of a new line of builder's kits in the 2010s broke this long dry spell with the mini-engine Tercel.  This design looks a lot like an evolved, higher-performance version of the Dragon Fly with a polydihedral wing.

The kit includes three sheets of laser-cut balsa, a BT-5 body tube and plastic nose cone, a 6-inch plastic parachute and rubber shock cord, and a clever standoff to keep igniter clips from hanging up on the glider.

Airfoiling the wing is optional, but I wanted to try it.  The wing is in four sections but the divisions are only partially cut through on the balsa, so you shape the airfoil by tracing around a template on the trailing edge, sanding down the trailing edge, and then rounding the leading edge.  This was tricky but not impossible.  After the airfoil is formed, you cut the wing apart and sand angles into each piece to form the correct dihedral angles.  Triangular supports are provided to set the angles, but it's still a little difficult to get them precise enough to join up with no gaps.  The instructions suggest using medium CA for nearly all of the balsa gluing.

The kit has painting instructions and a decal is included, but I left my Tercel bare for maximum performance.

For my first flight, I used a 1/2A3-2T.  On ignition, the rocket stayed stuck on the rod; I assumed this was because the slightly dirty aluminum rod combined with a 5 MPH wind pushed the glider off-axis enough to cause the launch lug to bind.  After that inauspicious start, I set the glider aside for a couple of years.  Finally returning to it, the second flight on an A3-4T and a shiny Estes launch rod was much improved.  The rocket weathercocked substantially in a 5 MPH wind.  The pod pod deployed shortly after apogee and the glider made a steep rapidly spiralling descent for an overall flight duration of about 15 seconds.  Three more flights were made, two on 1/2A3 and one more on A3.  One of the 1/2A3 flights was extremely low and short and the other again stayed stuck on the rod; the A3 flight was the best of the day at about 20 seconds. 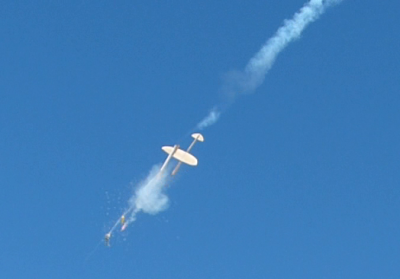 I was skeptical about the tiny parachute for the pop pod, but it worked well enough and deployed cleanly each time.

The glider flight performance certainly could have been better, but I expect that's mostly my inexperience in fine trimming, and the airfoil may have ended up a little asymmetric.

The Tercel is an interesting attempt to produce a high-performance 13mm-powered glider kit.  I haven't had great luck with it so far, but in the hands of an experienced glider builder it would probably do better.  Certainly the materials and design of the kit are well thought out.  It would be interesting to see if in zero wind the glider performance would improve, as the amount of weathercocking in even a modest breeze caused my flights to be off-vertical and ejection to be at least a couple of seconds late. 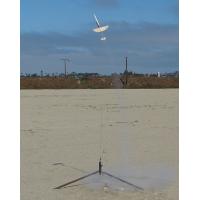 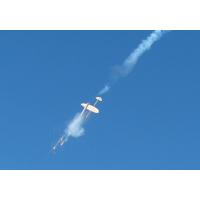