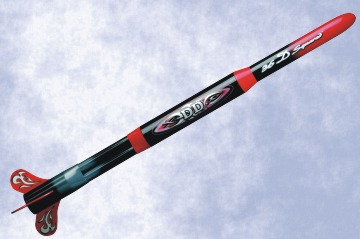 Brief:
This is a new Cluster rocket from Estes which has a payload section and a nice parachute recovery system.

Construction:
The kit was complete and well organized. It uses basic Estes components except for two transitions which are new. These are used to expose two BT50 tubes just forward of the fin area. These tubes form the motor mounts and are supported by 4 paper motor mount rings.

Cons: I thought the Transitions to expose the inner tubes were not required. The aft one leaves an exposed gap around the exposed tubes that would increase the drag.

The other con is the fins. For me they stick out to far behind the main tube and look like they will need some repair after a few flights.

Flight:
I have flown this rocket 3 times now all on D12-5 motors. All three flights have been successful.

Recovery:
The recovery system is the standard Estes elastic cord and plastic chute. This all worked great.

I will replace the elastic with Kevlar string when the time comes. Hopefully prior to the flight when the elastic breaks.

Summary:
The rocket looks great on the launch pad although I did not do the paint scheme that Estes has on the package.

This would make a great present for a 12 to 14 year old that wants to move up in difficulty.

When I built this kit I had a headach.The transition to the to different tubes wouldn't fit into the BT-70 tubes, so I had to cut to fit them. Though my friend didn't give me the instructions so I don't know if you supposed to or not.