Here's a new twist in Art Applewhite's UFO-series of rockets.... the Cone Rocket! I'm calling it a Cone UFO just to keep with the theme of what Art Applewhite Rockets seems to have a knack (and niche) in.

This is the 18mm Orange version. There are also 13mm, 24mm, and 29mm versions in Stars & Stripes, Mirror Gold, Silver, Yellow and Texas Special. 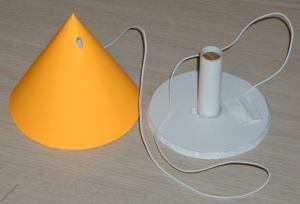 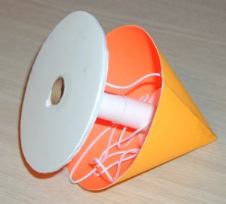 Also, in keeping with what Art Applewhite does best, this is a straightforward kit with very few parts. It has more parts than his standard UFO and Delta UFO, but still it is a rocket that can be assembled in about 1 hour. The kit includes a 18mm motor mount tube, a 19mm nose cone tube, a 36" round-elastic shock cord, color/design cardstock for top and reinforcing Strip, cardstock for the nose cone, shock cord anchor, and engine block, and finally foam-board, with preprinted patterns for the nosecone base and the bottom.

The instructions are printed on 4 pages of 8½ x 11" paper. They include black and white photos to assist in the building process. The tools and supplies that are needed are outlined: Scissors, #11 Exacto® Knife, Elmer's Glue-All®, 5-Minute Epoxy and 220 girt sandpaper. You are then warned to read through the entire instructions before beginning. I agree.

Assembly is described in a logical order and I had no issues building this rocket, except one. Be sure you have your two motor tubes before you start. My 18mm tube was slid into my 19mm tube and I never realized that I needed two tubes until I got to the steps requiring the second tube. I found mine, inside the other and it is a very good thing that no glue had gotten on it!

The instructions have you build the two sections of the Cone UFO. First you cut out the nose cone from the cardstock. This is then formed and glued. This is actually an inner support structure verse what we think of as traditional nose cones. A unique support method for this paper rocket. This nose cone takes all the ejection abuse. It also provided the nose weight needed for stability. Once the cone is formed it is filled to a described level with 5-minute epoxy. The inside is also coated with epoxy to strengthen it. Then after cutting out the nose cone base from the 1/4" foam board and using JUST the 19mm tube, the remainder of the nose cone is assembled. The shockcord is also attached here between the 19mm tube and the foam board base.

The foam board is cut the same as on Art Applewhite's other UFO's. Using your hobby knife, cut out the patterns. Cut out the centers to make the motor mount holes and the launch rod holes. Then the most difficult part of construction; cutting the bevel edge on the outside edges. This has to be done twice on this Cone UFO; for the nose cone base and for the bottom. Be sure to use a new blade and take your time. Doing those two things makes this a lot easier than it sounds.

The colored cardstock is then used to cut out the cone (body) and the reinforcing ring. The cone body is formed using a glue tab. Then the nose cone that was initially assembled is installed into the tip of the colored cone body. This really adds strength and the weight to the rocket's nose as well as helps in forming a nice tip.

The bottom is simply the 1/4" foam board with the 18mm motor mount attached; flush to the bottom. The thrust ring is added by cutting the long strip from the cardstock, rolling it, and gluing it into the motor tube. There are also good instructions to ensure that you have a nice fit for the 18mm tube into the 19mm tube.

Lastly the shockcord is mounted to the bottom using the 3-fold paper method. That's it.

Art Applewhite Rockets indicates you may paint the rocket or at "a minimum you should apply at least two light coats of clear enamel" to protect the rocket. I passed.

Overall, for CONSTRUCTION I would rate this kit 4 ½ points. Because my two tubes were shipped inside each other, I could have run into a real problem. Yes, there is a parts picture that shows two tubes, but I'm sure like many builders, I just dug right into it. Perhaps the note in step 7 should be expanded to say, "if the 18mm tube is in the 19mm tube, separate them now". I'm being hypercritical here!

Flight preparation includes sliding the 18mm motor mount into the 19mm nose cone tube. Then pushing the shockcord into the rocket, opposite side of the launch rod holes, before pushing the bottom flush with the cone tube.

I have flow the 18mm version 3 times in my front yard. Yes, this is a nice feature of these UFO rockets. They can be front (or back) yard rockets since they get very little altitude. I flew mine on an A8-3, then a B6-4, and then an A8-3 again. 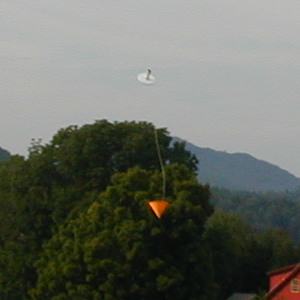 All the flights were the stable. They all went straight up, inverted to start descent and then, based on the delay, popped the ejection charge. The A8-3 needs to be an A8-1 if you were to eject at apogee. Also, since you get maybe 50 feet of altitude on the A8, the ejection charge can be quite loud. It startled my wife on the first one!

My third flight (A8-3) kicked the motor out at ejection with some force. Be sure it is in tight. Since the ejection volume is so little, it has a lot of pressure, and can make that motor a hot, flying projectile.

All three flights also demonstrated the success of the tumble recovery system. I even caught a picture of it falling!

For FLIGHT/RECOVERY, I would rate this rocket 5 points. Flights are low and slow. Makes it a good demo rocket. You don't need wadding. Overall, a unique looking and fun flying rocket.

I give the rocket an OVERALL rating of 5 points. Other than my hypercritical comments, I see this as a "perfect" rocket for its price, instructions, assembly and flight characteristics. I may have to go purchase a 29mm one for some fun with EconoJets!

HEY, someone beat me to the punch! I built a 24mm cone and will submit a review once I get to a launch. I generally agree with Nick's construction rating, but will deduct a half point because the cone is harder to form that his saucers' shrouds, and I wanted to make a distinction. Now I'm thinking drag race if similarly sized and powered cones, Deltas, and standard saucers could be scraped up.

I was going to write a full review, but the EMRR review is so thorough mine would be mostly redundant, so here is a quick mini-review. Construction: This is my second Applewhite cone rocket, so I learned from my mistakes on the first one and did not have much trouble building this one. I absolutely agree with the EMRR review that a sharp knife is critical when cutting the bevels in the foam board. When building the inside nose cone, several parts need to be smeared with 5-minute epoxy and then fit together before it sets. Practice fitting the parts together before mixing any epoxy, because it sets up quicker than you think. I had a little trouble rolling my own thrust ring out of the provided card stock getting it to fit cleanly into the motor mount tube. I ended up using a standard engine block from another kit. Construction: 4.5 Flight: Flights were great, with lots of smoke trapped in the base vortex. Lower and slower than a conventional rocket, but much faster than most saucers. As noted, the ejection is very loud with such a small body to pressurize and ejection occurring so close to the ground. Flights: 5.0 Overall: Great value for the money.