Brief:
Many of us have longed for the re-release of the quintessential rocket from the Golden Age of Estes, the Interceptor. In late 2007, Estes not only re-released that classic kit, but gave it to us upscaled for midpower! The Interceptor-E is a 24mm, 1.5x upscale of the original Interceptor with some new additions. I had just finished building my re-released, original sized Interceptor when I ordered the Interceptor-E kit. I knew it was going to be bigger, but was pleasantly surprised at how much bigger it was!

Construction:
The Interceptor-E comes packaged in the traditional Estes hanging bag with the front card actually forming a half box to protect the parts. All of the kit's parts were present and in good condition, with one exception which will be discussed later as it was not readily obvious when I inspected the parts. Included with the kit are:

There are 12 pages of well written and illustrated instructions for the Interceptor-E. There are however a couple of gotchas. Most of these were due to my not paying enough attention to what the instructions actually were telling me.

The construction starts out with the engine mount. The large plastic centering rings require epoxy to be bonded to the motor tube. After the rings, motor block and engine hook are installed, the body tube is marked with the normal Estes body tube wrap with a twist. The builder has to align two marks on the wrap with the pre-cut fin slots.

Next, is one of the gotchas that nearly did in my body tubes. The instructions show the tube coupler inserted into the read tube after a ring of glue is shown being applied to the inside of the tube. There is also a ghosted out tube with an arrow pointing to the couple. Whereas, if I had stopped to actually READ the instructions instead of just looking at the pretty pictures, I would have know that the front tube does NOT get glued on at this time as it seems to appear in the illustration! The motor tube front centering ring sits on the front of the coupler tube, so the front tube cannot be added until the centering ring is on! Luckily I realized my error before the yellow glue I had used to join the two sections had permanently set.

After the motor mount is glue in place with epoxy, the front tube is put in place. The instructions say to next put the tailcone on, but as with my standard sized Interceptor, I left this until last so that it could be painted separately.

Next are the fins. The large fins and wings are all multiple pieces that must be joined flat. In addition to this construction, extra "wing supports" have been added to the wings and "fin supports" to the top fins. Personally, I thought these looked clunky and out of place so I left them off. 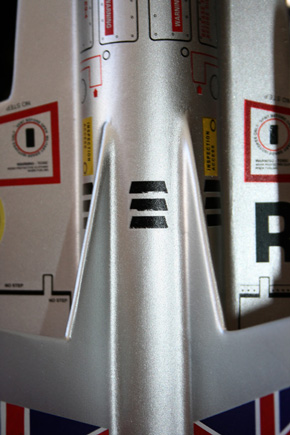 Only the belly fins are surface mounted on the Interceptor-E. The wings and top fins are slot mounted which makes alignment much easier. Estes recommends using epoxy on the fins throughout the construction. The wing tanks and antennas are added on to the ends of the wings and top fins. After the plastic bits had been added, I applied epoxy fillets to all the fin joints.

HUGE GOTCHA WARNING! The instructions next tell you to glue the launch lugs at 3" and 17" from the rear of the model. If they are, they will interfere with the layout of the decals! Turn to page 10 of the instructions and look at the bottom view of the model before gluing the lugs on. I did not notice this and put them where the directions said to and had to jockey the decals around the lugs. I was really not pleased about this! I finished the model next and then attached the recovery system to complete construction.

Finishing:
As the Interceptor-E was waiting in my building queue, I happened upon a notice online that Excelsior Rocketry was releasing a set of British replacement decals for the standard sized Interceptor. After inquiring whether there would be E-model sized versions release, I was told that I could beta test a partial replacement set for the larger model. Most of the USAF decals would be replaced with Royal Space Navy decals including Union Jack styled replacements for the top fins.

After looking at WWII RAF planes, I decided to paint my Interceptor-E model silver with British trainer yellow wing pods and belly fins to complement the replacement decals.

After filling the balsa with Elmer's Fil 'N Finish®, I sprayed it with a heavy coat of Kilz spray primer and lots of sanding ensued. I painted the wing pods and belly fins next. After the paint had cured for a day, I masked them off and painted the model silver. Lastly, I painted the tail cone gloss black before finally gluing it in place. Painting the wing pods before the rest of the rocket made it MUCH easier to mask. I did my standard Interceptor in the other order and it was a huge pain to mask the curve on the wing where the pod joins on. 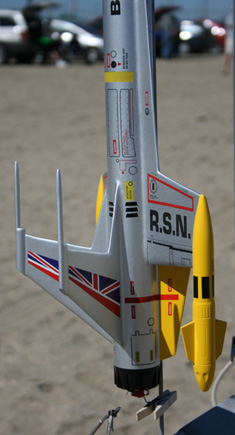 After the paint had cured overnight, I got to the part that I had been looking forward to since I had started the build, putting on the myriad of decals that make this model pop! I had heard many complaints about the decals for the standard sized Interceptor, but I had had no problems with the decals for it, so I expected the same for the E-model. Boy, was I in for a surprise.

When I pulled the decals sheets out their protective bag, I noticed that the black on one of the sheets was somewhat smeared. Not terrible, so I continued. After a LOT of trimming, I had separated out the decals from both the original set and the replacements that would be needed.

The Estes decals were everything that had I had hoped they wouldn't be. On the carrier sheet, they looked good with many clever little details, but that is the only good thing about them. While I didn't manage to actually tear any of them, they had a proclivity to curling after the backing paper was removed. Also, once off the backing and on the model, they were DOWN and were extremely difficult to shift, even to just straighten wrinkles out. The black decals again became an issue as the black seemed to crumble off at the slightest application of pressure.

The Excelsior decals by comparison were a joy to work with. They came off the backing paper cleanly and moved easily on the model into position without folding or curling. The only minor problem I had with these was a slight beta test sizing error (somebody's gotta try out the first ones, right?) that has been now corrected.

After the decals had set overnight, I applied a coat of Future floor polish to the entire model to seal the decals on. 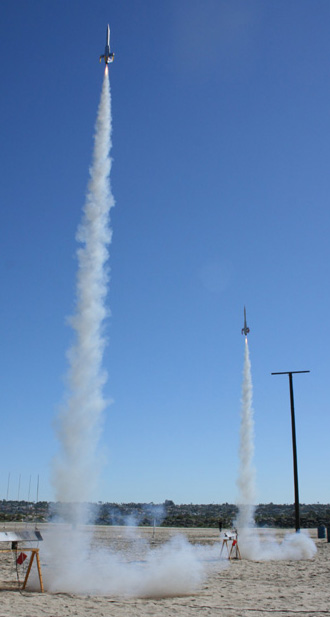 Flight:
Apogee Rockets, the makers of Rocksim, recently released a warning that the Interceptor-E would not be sufficiently stable coming off a standard length launch rod when launching on the Estes E9-4 recommended motor. They recommend the following list of motors instead: D12-3, E15-4, E30-4, E18-4W, E28-28T, F12-5J, F24-7W and F39-6T. I have read several accounts of perfect flights on the E9-4 on long launch rods as they allow the rocket to have enough speed to be stable.

Since the DART club 3/16" rods are only 36", I decided to take their recommendation and launch my Interceptor-E on a E18-4W for it's first launch. After building the motor, I inserted it into the rocket and put a couple of hand fulls of dog barf wadding into the body. After challenging another flier to a Interceptor-E drag race, loading our rockets on the 3/16" launch rods, we walked back to the launch table and he hit the button!

We both flew on the same motor and the rockets flew practically identically. Fast and high! Excellent boost on the E18-4 with deployment at just about the right time.

Recovery:
There are some online reports of the shock cord being too short that seem to have some validity based on the drag race flights. I had used the stock cord and my friend has replaced his with some longer tubular nylon. On my Interceptor-E, the nosecone snapped back and damaged the leading edge of one of the wing strakes. On my opponent's, there was no damage. The 24" nylon 'chute seems to be sized just about perfectly for the model.

On my flight, the motor clip released and the reload casing spit out of the model, nearly hitting a spectator. For future flights, I will be sure to masking tape the hook in place.

Summary:
The Estes Interceptor-E is a great upscale of one of the most beloved kits in rocketry. There have been some excellent improvements from the original design, including the pre-cut fin slots and the extremely clean molding of the plastic parts. While I chose not to use the fin reinforcements for sentimental reasons, I do appreciate the attempt to update the look of the original model.

The loads of excellent looking decals for the kit were a nightmare that could have easily ruined the look of the finished model if I hadn't been extremely patient once things started to go wrong with them. The add-on Excelsior Rocketry decals took this model to the next level of fun. I love the Union Jacks on the tails!

Reviews of this kit are right on the mark. Estes seems to have half stepped this production. Balsa fins and probably the worst decals I have ever worked with make this kit second rate given its $50.00 price tag. Those wishing to have a good looking model are in for an exercise of frustration when it comes time to apply the decals. Clear coating sheet prior to application helps some, but doesn't eliminate problems of crumbling, wrinkles, breakage, and worst of all folding under. Contact Estes, as I did, and let them know--perhaps someone there will listen.

I can't offer much more than what has been given here. I didn't add the ribs to the wings and rudders, rather I used 1/4oz glass cloth and CA to laminate these surfaces. Three coats of Crystal Clear took care of the decal problem. My maiden (and to date only) flight was on a F24 reload.The flight was spectacular up to several hundred feet but an ejection failure brought it in ballistic. I expected a dust buster recovery and to my surprise the only real damage was to the nosecone and forward body tube, both of which can be replaced. This is one tough rocket.

I love this kit. It's the coolest looking one at our launches and flies well. I agree about the E-9 engines though: very under powered. It flies well on AeroTech E-15 or E-30 though. I finished this with the "Canadaceptor" decals from Excelsior over silver paint with blue wing pods. The decals were excellent but took me 8 hours to apply. Instead of using the chunky balsa wing reinforcing strips, I used 1/8" square basswood strips with a sanded profile. They turned out well and they look like weapon hard points on the wings. I first flew it on an E-9 (which is a pretty crappy engine IMHO), and it weathervaned seriously and basically went ballistic into some brush. No damage though. Before my next launch session, I used RockSim and it predicted the behavior on the E-9 pretty accurately. Since then I've used E-15s and E-30s, and it flies well. The E-30 really gives it a kick in the pants. I love this model so much that I've got a 200% upscale on my top 3 "next to build" list...