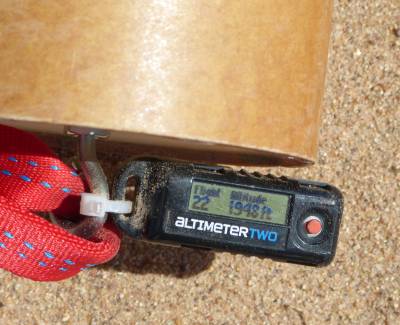 When I returned to rocketry as a BAR in 2009, I wanted to measure how high my rockets were actually flying.  At that time, there weren't a lot of options short of a dual-deployment controller, which I wasn't ready for, so I ended up with a "How High SP" unit from Winged Shadow Systems (now OOP) which had originally been developed for R/C airplanes.  The How High worked well (in fact, I'm still using it) but it was a fairly large unprotected circuit board that had to be placed in a payload section and so wasn't practical to use in smaller rockets.  The next unit I got was the Estes altimeter, a small unit in a case with an LCD display that could simply be tied onto the shock cord of a rocket.  That also worked all right, but I lost two units when they became detached during flight (I think I was too confident in the metal clip Estes provided.)  When looking for a replacement, I decided to splurge and get an AltimeterTwo.

The AltimeterTwo not only measures the peak altitude of the rocket using a pressure sensor, it also has an accelerometer and reports 10 parameters: peak altitude, maximum and average acceleration, thrust and coast time, time and altitude at ejection, maximum speed, descent speed, and total flight time.

The AltimeterTwo has an LCD display and a single button for control.  It has an internal lithium rechargeable battery and is charged through USB, although it doesn't communicate with a computer.  My unit was the second generation version, which requires a separate USB cable (included) instead of the integral USB connector of the pre-2014 first generation.  The unit has enough memory to store 100 flights' worth of data.

The unit works, and works reliably, except for two issues.

First, I usually just attach the unit to the rocket at the eyebolt or shock cord attachment point to the nose cone with a zip-tie.  I've found on several occasions that the unit has triggered while I was carrying the rocket to the pad or putting it on the rail or rod.  John Beans of Jolly Logic told me that the unit is somewhat sensitive to these false launch detections and it's best to arm the unit just before launch, when the rocket is already on the pad.  Also, he has improved the launch detection algorithm since my fairly early unit (mine has firmware version 3.8) so this problem may be less severe on new units.

Second, while it's pretty robust, the unit is not indestructible.  On flight 35, rebound of the rocket sections managed to hit the LCD and crack it, killing the display.  Fortunately, Jolly Logic sells replacement LCD displays and taking the unit apart to replace the display is simple, so I was back in business in a few days (and I got flight 35's data back!)

While you can just loosely attach the unit to the rocket, it has a maximum acceleration reading of 23 g's.  If you carefully mount it so its axes are tilted relative to the main axis of the rocket, you can use it up to 40 g's (see the instructions for details.)  It seems like the unit is happier when hard-mounted and, if possible, protected from ejection gases and possible impacts.  Jolly Logic has replacement LCDs, batteries, and cases available, as well as protective mounts and pouches.

Though the manual emphasizes the need for vent holes, I usually don't make any provisions for them and the values still seem reasonable.

The AltimeterTwo is really a unique product.  Most of the flight parameters it measures could be determined using a pressure-only recording altimeter, but the AltimeterTwo does all the data analysis required itself and presents the results immediately on its display.  It can immediately highlight short or long ejection delays, too-small parachutes, and reports an accurate maximum speed as well as altitude (pressure-only altimeters can't sense speed reliably.)

It works well attached loosely, but be aware of the possibility of false triggering.  If you don't need the extra parameters, an AltimeterOne may be more robust for loose mounting. 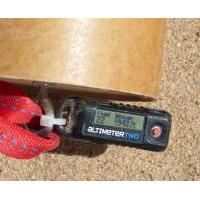