Reviews by Dick StaffordReviews of Give 'Em The FingerScratch Reviews

Brief
This is made from a 'Finger Blaster' foam rocket and was the 4th-place winner in the Boink rocket contest.

Construction
Initially, I decided that I was not going to buy a foam rocket to enter the Boink rocket contest. However, at only 99 cents, I just couldn't resist picking up a 'Finger Blaster' (by Kidpower, Inc). This foam rocket has a built-in rubber band and is launched, at the name implies, by hooking it onto your finger, pulling it back, and letting her rip. The rear end conveniently had an 17.Xmm hole and a rigid stop where the back end of the rubber band is attached. I decided to make this entry a bit more complicated, so I constructed a rear ejection streamer assembly with an outer 18mm tube and an inner 13mm motor tube. This assembly was friction fit into the rocket's back-end. The streamer is not shown in the photo's, but is packed between the 13mm and 18mm tubes.

After trying to simulate the rocket on RockSim, I decided some nose weight was required. After some head-scratching, I used one of those lead fishing weights that connects by feeding in the line and twisting the rubber ends. Well, I removed that rubber piece, extended the rubber band on the rocket, put the weight on, and let the rubber band contract. The weight retracted into the rocket and appeared to be solidly connected to the rubber band. Other than the launch lug that I glued on, no permanent modifications were made to this rocket! 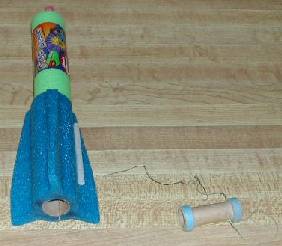 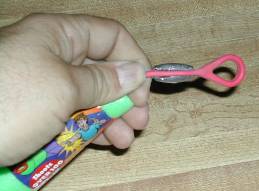 Flight
My first flight was to be on an A10-0, just to verify stability. It boosted straight up and as a bonus the streamer assembly drag separated. The streamer is short and only slowed the rocket slightly, so it still landed with a nice boink. I actually liked the drag separation, so my second flight was also on an A10-0.