Brief:
Despite its well thought out design and unique good looks, the Alien Invader was produced only from 1976 to 1980. It ranks alongside the Andromeda as one of my two favorite sci-fi based rockets from the golden age of Estes rocketry. (Your opinion may vary, of course. My opinion may be biased by the fact that both were among my favorites from my largely never flown 70's fleet.) Until recently, the Alien Invader was a difficult cloning project due to the chronic unavailability of its PNC-50CA nose cone. Mike Schmidt at Moldin' Oldies has added it to his collection of available Estes cones, so your biggest hurdle in this project has been cleared.

Before I started this project I assumed that the hardest part would be finding a PNC-50CA nose cone. I thought wrong. Moldin' Oldies makes that easy. Cutting all the balsa for and building the fins is what makes this project a challenge. I received the cone from Mike at the end of last summer, but it was several months before I was able to summon up the nerve to actually start the project. It isn't that it's a particularly difficult project but more that it requires a lot of unique curved balsa cuts. I had the engine mount mounted with the Kevlar shock cord tied in behind the forward centering ring before the New Year, then forced myself to cut the balsa one Sunday in January while watching football. It was well into March before I started the actual construction of the fins.

As it turned out, this was not a big problem to deal with, even after I decided to coat the fin parts with Elmer's Fill 'n' Finish before attaching them to the body tube. This caused some warping, but to counter the warp I let the Fill 'n' Finish dry, then placed the fins between two pieces of waxed paper and stuck them under a heavy book on the countertop for a few days. While the F 'n' F had dried, the wood underneath hadn't. As a result, the fins were still quite pliable. They straightened out while drying under the book and as a bonus were also a lot easier to sand like this.

Once they had dried and straightened, I glued the main fins to the body tube using Titebond Gel CA. I then sanded all of the smaller vanes and finlets before attaching them in the same way to their respective spots on the body tube, ram tubes, or main fins. I had attached the fins to the ram tubes before attaching the ram tubes to the main fins, but in the end I don't think it made it any easier.

Finishing:
When the time came to decide paint color, I was initially leaning toward black and yellow--the same as I had with my original in 1977. That was before I found an unopened can of Model Master Deep Pearl Purple paint that I had bought for another project that I hadn't yet started. After priming the entire rocket with Valspar primer I sprayed the inside of both of the ram tubes with some no-name florescent red spray paint that I've had since the early 90's. The can has no label but the paint still sprays and is perfect for standout bright work like the inside of the ram tubes. I sprayed the nose cone and most of the body tube forward of the fins with Valspar Bumblebee Gloss, then cut out the large wrap decal and used it to figure out where I'd need to mask to spray the purple and still allow the decal to fit as it was supposed to. Another area that needed masking was the aforementioned ram tubes. I didn't want the purple paint to leech into the ram tubes, so to keep this from happening I came up with a novel solution. Since the ram tubes were basically BT-50 engine tubes, I took two expended 24mm casings and wrapped them with masking tape so that they fit tightly in the tube. I fitted the two casings from the rear first and started spraying the Model Master paint in light coats, taking special care to hit all of the nooks and crannies between the fins and dowels, as well as the trailing edges of the fins. When the paint had dried sufficiently, I pulled the casings out and stuck them in from the front of the ram tubes and started the process all over again.

As for the decals, I just had them laying around. No, really. I won them in an auction a few years ago with a nose cone that was actually scaled for more of a BT-48 or BT-49. They went on nicely and gave the model that rare finished look that many of my rockets never manage to achieve. The large decal split apart as it was being applied, but the parts were large enough and easily moved enough to make puzzling them back together a fairly simple job. Whoever made them was a much better decal maker than a nose cone maker. 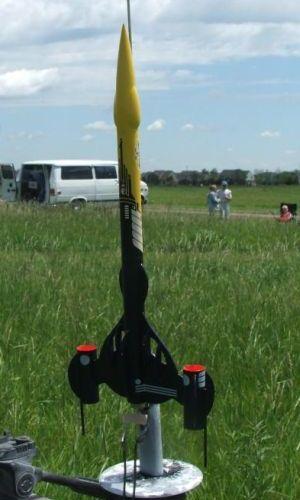 Flight:
Once finished, the biggest hurdle in getting the Alien Invader off the ground was the weather. We had gone through an unfortunate string of weekends where nice weather coincided with no scheduled Quark launch while lousy weather managed to fall on every flight weekend. Finally I couldn't take it anymore and headed up to the VOA on a May Sunday that felt more like late October. The windy and cold conditions meant that there would be no wait on a pad and that I would only be limited as to flights by the numbness in my fingers and my willingness to fight the wind. With a van full of first flight or recently repaired rockets, I decided to take the chance.

I made the Alien Invader my first flight of the day and loaded it conservatively with a B6-4, just hoping to get a clearer idea of how it flew on a mid-sized 18mm motor before "stretching it out" with the C6-5 that I had hoped to fly it on. The rocket arced into the wind somewhat, but the flight was smooth and stable through the whole flight with ejection occurring just as it arced over. Despite getting whipped around a little, the rocket wasn't damaged no doubt due to the excess Kevlar® and elastic that I built into the recovery system. It drifted back toward the pad on the 12" chute and the whole structure looked to be about 8' long, which probably isn't that far off. The only butt clenching moment came when the rocket appeared to be on a collision course with the access road but it cleared the road by several feet. Despite the successful flight, I decided to retire the rocket for the day. Conditions were just too nasty.

From the standpoint of wind conditions, the next launch wasn't a big improvement over the first but the bright sunshine made all the difference in the world. I managed two flights on that second day; both on C6-5s and both were impressive. The winds were constant all day, but I managed both A.I. flights during times when the winds weren't threatening to take every high flight out of the park. Both flights appeared to be high and fairly stable but both obviously windcocked off the pad, giving the flights a gently arcing flight path. With the winds this turned out to be a blessing as it helped to bring them closer to the pads on recovery. 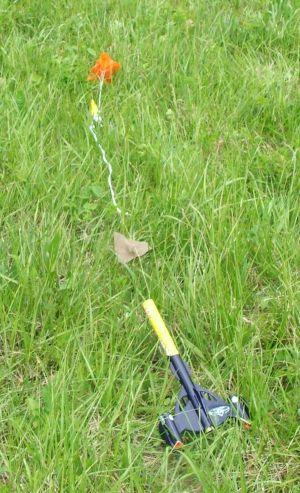 Recovery:
With the early B6-4 ejection charge that befell my upscale Taurus later in the day, it's probably a good thing I overbuilt the shock cords in this model, even though this wasn't my reasoning behind the extra length. I went with a combined 6' of Kevlar and elastic because I wanted to avoid a dent from the overenthusiastic Estes ejection charges of late. I also built a 2" x 2" square of Kevlar perma-wadding into the rocket, which performed just fine. The Thrustline 12" nylon chute is the perfect size for this rocket. There was not too much drift but it comes in plenty slow, which is a must when the first part to strike earth is always going to be the rear dowels. (I have a feeling that the A.I. and the Andromeda are going to share this parachute when the Andromeda is finally finished.) The only potential problem that I noticed was one I expected from the start. On the third flight the shock cord got tangled up with one of the rear dowels, resulting in a sideways, almost Centuri Super Kit-like landing. It drifted quite a bit but landed safely among a group of RC fliers, whose planes had been circling in the area where it came down. It didn't damage any of them either.

Summary:
PROs: Awesome looks on and off the pads. Impressive performance. Anytime you an clone something that's seen at the pads as seldom as this one is, you're onto something.

CONs: Fins are a challenge to build and finish.