Brief:
This rocket is a scale model V2 that was converted from a cardstock display model. The model was a free download from Currell Graphics and is available in a black and white test pattern or the operational camouflage scheme. I built the black and white version featuring a parachute recovery.

Parts were printed on 110# cardstock. All of the centering rings used the optional stiffeners to make them double weight. Rings G4 and G5 were the rings that held the motor tube and were reinforced with an additional layer of cardstock and the center hole was cut to fit over a BT-20. The main body tube's forward stiffening ring was recessed 2.5" from the forward end to allow for the nose cone shoulder, wadding and parachute.

The fins have a four piece internal structure that is probably the most difficult part of the assembly. The vane assemblies were left off because they would be in the way of the motor. A 1" strip of cardstock was formed into a ring that just fit into the main body and was glued to the nose code to form a shoulder. The shock cord was attached with the standard paper tri-fold mount. Clay was added to the nose to bring the balance point to 10" from the nose with a C6-5 installed. 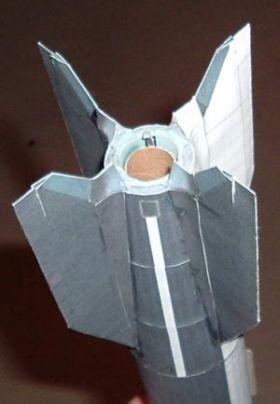 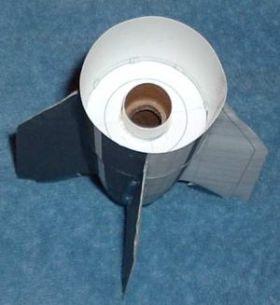 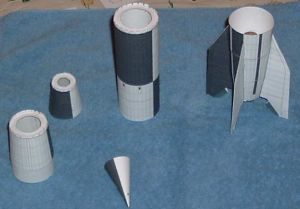 Flight:
I flew this model a total of four flights. I used B6-4s for all flights. The forward compartment above the forward stiffening ring is just large enough for wadding and parachute. The flights were straight with the launch slow enough to be able to follow the flight easily. I anticipate that a B4-2 or B4-4 would give it an even more scale-like launch. 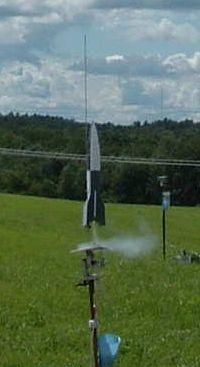 Recovery:
The model was recovered using a 10" parachute made from a plastic tablecloth available at any party store. It comes in at least a dozen colors and has a slight texture that prevents the parachute from sticking together like most kit chutes. Recovery was fairly quick on this size parachute but no damage occurred on any flight. On one flight, the parachute got caught in the nose cone stiffener, failing to deploy, and the rocket came down with just the shockcord between the two pieces yet it still suffered no damage.

Summary:
This is a fun project for anyone with a little cardstock modeling experience. The fins have a built up internal structure that makes it a little more difficult than most cardstock conversions.