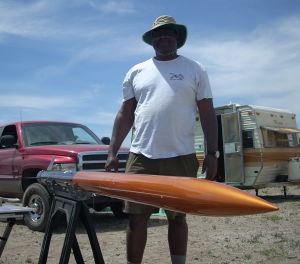 Brief:
Rocket designed to handle the most powerful 3-inch motors, commercial and research, notwithstanding.

Construction:
The Extreme Test Vehicle (ETV) is a scratch design that won't shred while flying any 3-inch commercial or research motor. To accomplish this mission parameter, this rocket is equipped with the aluminum fin can made by Hawk Mountain for its four inch tubing. In addition, the rocket has a clever 0.5 inch thick aluminum ring for motor retention that is held in place by all-thread and three nuts. The airframe tubing is Hawk Mountain's Extreme II tubing. This tubing is designed for high speed flight using high thrust M or N motors. Finally, the rocket has a Hawk Mountain 4 inch fiberglass ogive nose cone with a 54mm tube inside it to hold my Walston tracking transmitter.

There were no anticipated issues with this particular rocket.

With a maximum launch weight of 31 pounds, standard Blacksky rail guides are sufficient. Two rail guides are screwed through the airframe into the plywood centering rings around the motor mount tube in the motor section. A rail length of 8 feet is required on a suitable launch pad.

The ETV was fairly easy to build, particularly due to the aluminum fin can.

The harnesses are made from 1 inch wide tubular nylon from Rocketman. The ends near the pyrotechnic charges are encased in Kevlar® sheathing to protect the nylon. The drogue harness is 20 feet long and the main chute harness is 25 feet long.

Pyrotechnic devices are 4F black powder contained during the flight in 2.5 gram urethane containers and ignited by Daveyfire electric matches. 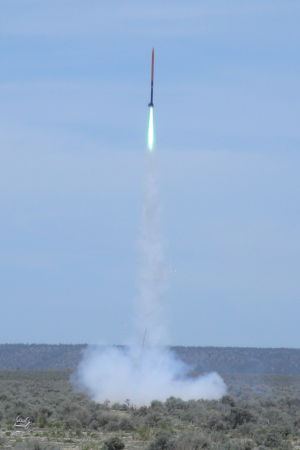 Flight and Recovery:
For its maiden flight, I chose the largest 3-inch commercial motor I could find: the Animal Motor Works M2500 Green Gorilla in the 75-7600 case. This case is 40.9 inches long and when it's filled with propellant, that motor weighs a ton! In fact, we're talking about 16.5 pounds for both the propellant and the casing, which is amazing given that the rocket's dry weight is 14.312 pounds.

We decided go day would be Sunday, May 18, 2008. At 1pm, the temperature was 80 degrees at Oregon Rocketry's Brothers, Oregon, launch site. My friend, David Holloway and I lifted the ETV onto our shoulders and carried it out to the M motor launch pad we call "Quadzilla." We slid the rocket onto the rail and switched on the altimeter. Then we lifted the rocket into launch position, inserted the igniter, and checked for continuity. When we were satisfied that the circuit was complete, we returned to the flight line.

Moments later, the LCO announced the flight and performed the countdown. Then he flicked the switch and a second later a puff escaped from the rear of the motor, followed by a column of emerald flame and billowing white smoke as ETV catapulted off the rail into the sky! The rocket flew straight and true on a tight column of smoke with an angry roar for a second or so. Then it grew silent, like the quiet before the storm. At first, I thought the motor had burned out too early. Then, we heard a loud boom, followed by the continuation of the motor's roar. I grinned from ear-to-ear when I realized that I had heard my rocket create a sonic boom as it continued to soar high into the heavens. 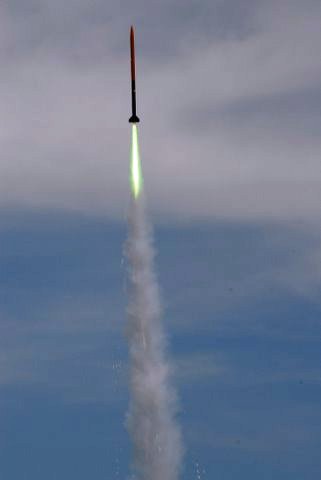 Finally when it achieved apogee, the rocket separated and ejected the drogue. The ETV returned to Earth in a controlled descent until it reached 800 feet and ejected the 60-inch SkyAngle parachute from the main chute compartment. The rocket drifted slowly toward the ground and landed about a mile away from the flight line. We drove on a fortuitous dirt road up to the ridge where the rocket had landed and used the tracker to locate the rocket. We found the rocket undamaged and looking good after returning from an altitude of 18,313 feet.

The M2500 Green Gorilla motor sent the rocket streaking skyward at better than Mach 1.6 and the rocket returned unscathed. The fin can easily handled the flight and the rocket flew almost like it was guided by a laser beam so the fins are true. What is so impressive about the ETV is that it vastly outperformed the RockSim simulation by 2000 feet or so. The rocket was very close to our waiver so this is a fast rocket that may require a window if you use a really hot research load.

Summary:
The Hawk Mountain fin can and Extreme II tubing are very impressive and apparently can handle anything the mightiest 3-inch or 4-inch motors can throw at them. If you want a great rocket that can fly fast and high with big 3-inch motors and hold its own with rockets that fly at BALLS, the Extreme Test Vehicle most definitely fits the bill.