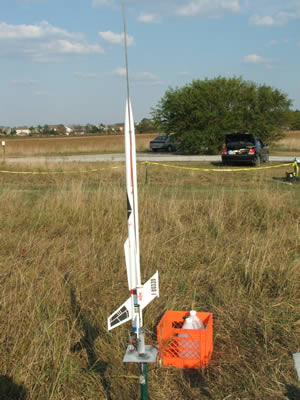 Modifications:
The cluster was built the old fashioned way: no motor retention clips. I glued three pieces of BT-20J together (with a heavy line of wood glue to seal the hole left in the center of the tubes,) then glued an engine block into one end of each. I then glued a CR-5060 to the top of the tubes, both to act as a centering ring and to seal off the three holes left around the outer edge of the tubes. When the glue on the completed mount was dry, I cut a slot into the outer edge of the centering ring and slipped a 36" length of Kevlar shock cord into the slot, knotting it behind the ring and securing it heavily with wood glue. When that was dry I ran a thick patch of wood glue all around the inside of the main body tube about 2" in. 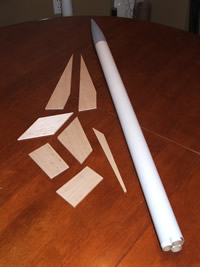 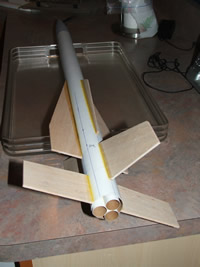 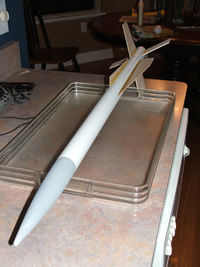 I pulled the Kevlarback through the rear of one motor tube to keep it from getting glue on it, then slid the whole structure into the tube in one smooth motion to keep it from sticking. I left about 1/4" of the end of the motor tubes sticking out (just because I like the way it looks.) I then rotated the tube while looking in from the forward end and let the excess glue fill coat the centering ring and inside of the body tube to guard against any possible spots where the ejection charge could possibly escape. The tube was then stood straight up and allowed to dry.

The decal modifications were a bit less involved. I blew the original scans up by 1.67 and printed it out on two sheets of Bel Decal Paper. This was then coated with Testor's Decal finish. 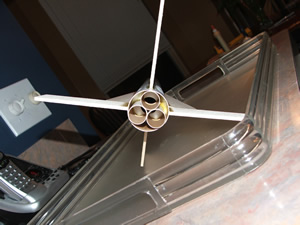 Finishing:
Another advantage that the Satellite Interceptor has over the S.W.A.T. aside from good looks is the simplicity of the paint scheme. After priming, filling and sanding, the S.I. requires nothing more than a coat of gloss white paint as opposed to the complicated masking and camouflage scheme of the S.W.A.T. Even finished, the ugly S.W.A.T. is an imposing bird, but there is no comparison between it and the elegant Satellite Interceptor.

Flight:
There were no recommended motors for a clustered version of the S.W.A.T., (which called for a single 18mm motor despite the size of the finished rocket.) Since the C6-5 had been one of the motors 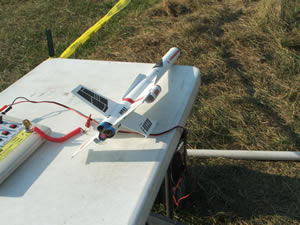 that had been called for in single motor form, I figured that three would work nicely in the cluster. (It also helped that I had previous experience with clustered rockets of this size.) All three motors were wrapped with a 3/4" round of masking tape to make them stick better in the engine tube, then a double wrap went around the extended tubes of the engine mount and the motors. On the only flight to date, only two of the three motors lit, causing the rocket to arch back over the field in an unexpected direction. The arc was gentle enough that it did little more than cause a slight change in the recovery area. No one initially noticed that the flight occurred on 2/3 power, and it wasn't until I neared the recovery area that I noticed the pink plug still in the third motor.

Recovery:
Recovery was handled by an 18" Thrustline chute and a handful of dog barf. Despite the huge fins sticking out at the back end of the rocket, there was no damage.

Summary:
Pro: The Satellite Interceptor was one of the coolest designs Estes ever came up with, and the S.W.A.T. upscale was similarly great looking except for the decals. Great candidate for a cluster. Even greater candidate for an E-powered upscale. ;-)