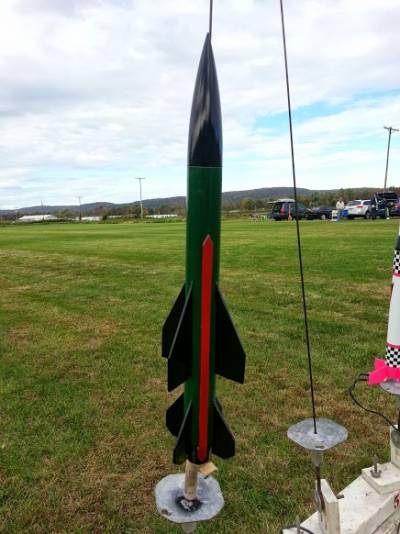 Great looking rocket with eight fins and a boat tail.  It also has a unique cable tunnel balsa piece that attaches to the body tube.

The kit comes with two (3?) pieces of 1/8" balsa wood.  The wood is sturdy though soft.  Also included are several templates: fins (4 large forward fins, and  4 smaller aft fins), a fin guide for fin placement on the body tube, the cable tunnel assembly, and the boat tail cone.  The kit has an elastic shock cord, a plastic nose cone, a 15" plastic parachute, and a large block of clay/putty.  The directions are thorough and straight forward.  A large picture of the completed rocket provides a backup for any misguided parts assembly.

I enjoyed building this kit.  The instructions are good and clear.  No special tools are required.  You need to be careful before cutting the balsa that you have laid out the templates to fit on the wood.  I mistakenly forgot to cut the cable tunnel assembly from the stock and had to use some extra balsa from an Estes Designer kit.  I also used a stiffer card board (#110) for the boat tail shroud.  The shock cord is attached using an Estes-type attachment.  Make sure the cord attachment is at least 2" inside the body tube to allow for the nose cone.  No problems here.

In order to balance the kit, all of the clay/putty provided should be put into the nose cone.  I did this and covered it with West systems epoxy.  Given the plastic nose cone, I think epoxy should be used, but 5 minute epoxy is likely fine.  The nose cone feels pretty heavy after all this, but I checked the CG and CP after completing construction and the weight appears right.

I finished the fins by papering them using techniques I saw on the Rocketry Forum. (http://www.rocketryforum.com/showthread.php?42250-Balsa-technique-question&highlight=double+glue+joints).  This adds strength and acts as a filler/finish for painting.  As I mentioned, the balsa was soft though thick, so papering these fins was very useful.  Papering is a technique I like... to me it's easier than Elmer's wood filler, and I don't get the warping I usually get from the filler.

After papering and adding the cable tunnel assembly piece, I glued everying together with Titebond wood glue.  Then I paint a first coat with Rustoleum gray filler primer.  After this I sand with 400 grit paper.  I paint again with Rustoleum white flat primer, and wet sand with 400 grit paper.  Finally, I painted it forest green body, black fins, and red cable tunnel.  I'll post a picture when complete.

I cut the parachute using the 12" template rather than the suggested 15".  I also cut a 2" spill hole.  This was a good idea, as the first flight occurred on a somewhat windy day.  Using a D12-5, the flight was flawless, descended quickly and landed close to the pad. There was no damage to the rocket.

A great rocket with a unique profile. 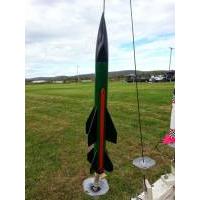