Brief:
This is a parallel staged rocket with breakaway booster pods firing off a 5-motor cluster. Definitely not something you see at a typical launch, this one is a sure crowd pleaser. Described as a skill level 4, this is clearly not something an inexperienced builder should take on.

Construction:
I received this as a Christmas present. My web challenged father had a little trouble actually ordering this via phone/mail, but I'm sure they do just fine when using the modern age online shopping cart.

The components were very carefully packed with plenty of bubble wrap. I thought it was especially neat that the smaller 13mm nose cones were packed using recovery wadding, which comes in handy when you're dealing with 5 recovery deployments per flight. 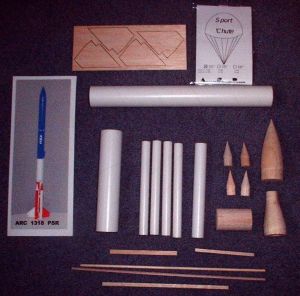 The balsa cones and transition were all very good quality. The tubes were typical quality white cardboard with minor seams that needed to be filled.

The instructions for this are generally well written and most steps have supporting photos. I can't stress enough that this is definitely geared for the advanced builder. Even though the instructions say fairly specifically what to do, you really need to have an understanding of how this all works as you go along in order to pull this off well.

I managed to wrap up the construction over a weekend, spending about 4-5 hours each day, distracted by the occasional load of laundry, dog walking, etc.

One minor beef with the instructions is that the photo quality was a bit grainy and making a color photo Abode Acrobat .PDF version of the manual online would be a nice plus.

Construction starts out with the booster interlock assembly. I'm not going to bog this down with too many details (although the instructions are 67 steps over 12 pages), and will stick to mainly strategy and tips. The 4 boosters are designed to lock together forming a square. This is accomplished through a set of interlocking tabs on the aft end, which is constructed out of 2 balsa rails and 2 balsa tabs per booster. You have to be very careful in the

measurements during this process in order to get a fit that will work. As an example of how exacting the tolerances are, during the early stages of construction you make small 2 layer patches of electrical (friction) tape to place on the main body tube, simulating the paint thickness, so that the boosters don't lock on too tightly. 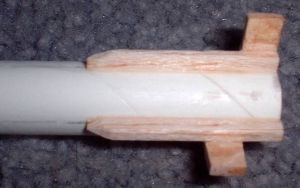 I normally use yellow glue for balsa bonds, but in this case I switched to thin and/or medium CA. The main reason is that the thin CA strengthens the tiny, fragile balsa and I was able to avoid the relatively large fillets from wood glue. Oversized fillets can kill you in this area.

One warning on the tab construction and bonding: pay careful attention to the photos. The instructions use phrases like "left rail", which can be a little confusing when you're trying to figure out which side of a circle is left and the rails are 90 degrees apart, not 180, so left or right is a key distinction. 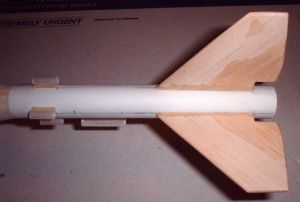 Once you've built the basic 4-booster framework and test fit it to the lower body tube, you then attach the 4 fins. Fin alignment is pretty critical. Not only do they need to be parallel to the body tube, but they have to be darned near exactly 90 degrees apart. If you're off just a hair on the lines, like from an oversized marking wrap, you won't be able to fit the booster assembly over the fins. The fins are notched to accommodate the boosters' interlocking tabs, and in my case I had to open up this notch just a bit.

The area where the fins and booster run together is reinforced with thin CA and sanded back down. This is a great construction tip. 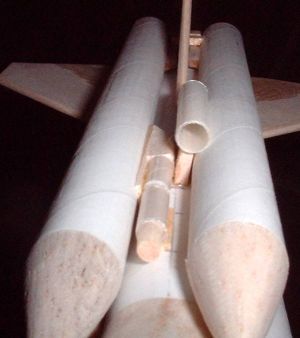 The boosters are held in place at the forward end by a pair of launch lugs locking in over wood dowels. This wasn't quite as complex as the interlocking tabs, although it does call for gluing a 3/16" square balsa piece onto a 1/32" balsa base, then sanding the block down to a sharply rounded taper. I can't for the life of me think of a functional purpose to this other than possibly a tiny reduction in drag. The instructions also call out for marking booster tubes for placement of the lug/base assemblies. These are actually attached by fitting the boosters over the body tube and marking off placement lines is not necessary. I got the sense in this section that they had tried 2 or 3 different construction approaches and forgot to edit out some of the "old" approaches along the way.

The booster lower body tube assembly is easily about three-fourths of the work on this rocket. After completing that, the rest is fairly simple. The 18-34mm balsa transition is glued into the lower tube and the launch lug is bonded to the upper tube. After carefully aligning the upper launch lug with the placement of the lower lug, which has to be sandwiched almost impossibly askew of a fin line between the boosters, the upper body tube is glued in place. The payload section is standard bulkhead tube-friction fit nose cone stuff.

Construction wraps up with installation of the thrust rings and recovery devices. I wasn't paying close attention to what I was doing. I actually followed the instructions without applying any thought and made a minor goof in the booster recovery. The instructions say at the start of this section to pull the 13mm nose cones, screw eyes, thrust rings, Kevlar®, and 1/8" shock cord material. They then say to cut the Kevlar® cord and streamer material into 4 equal lengths. What should be pulled is the streamer material and I wound up cutting the elastic into 4 parts. It's actually supposed to be one long piece later used in the payload recovery. No big deal as I've got piles of extra shock cord to work with...

Finishing:
For the finish, I really liked the red/white/blue color scheme on the header card so I decided to copy it. The booster tubes were easy: paint 2 red and 2 white and then swap the nose cones. The central tube was a bit trickier, as I had to create a checkerboard pattern along the transition section. Overall, it turned out very nicely.

In order to make sure everything separated cleanly, I also topped off the finish with a nice coat of automotive wax. This gives it the gloss of a clearcoat but also reduced drag and creates a slick finish.

Flight:
After waiting most of the winter for a decent flying day plus the occasion of a club flight as you don't want to track 4 pods plus a main tube alone, I finally caught a break and sent it up on a breezy (12 mph) day. For the first flight, I emptied a pack of four A10-3s and used a B6-6 in the middle. I also used ARC's 5-motor cluster clip whip to avoid the hassle of twisting all those ignitor leads.

Our 12V system managed to light 3 of the 4 A10's and the B6. The flight was excellent and the dead pod did not adversely affect the stability or flight path.

The A10's seemed to stick just a second or two after burnout, but did eventually break free while the B6 was still burning. The pods then popped the streamers out while the B6 main tube was coasting. The B6 popped a bit after apogee, deploying the 12" silver mylar chute.

Recovery:
Recovery was fine. The orange streamers are a bit of a nuisance to pack in the BT-5 tubes, but very helpful to spot the pods during descent and when hunting for them on the ground.

PROs: Complex flight profile is a real challenge and great experience. Plenty of engineering work went into this one.