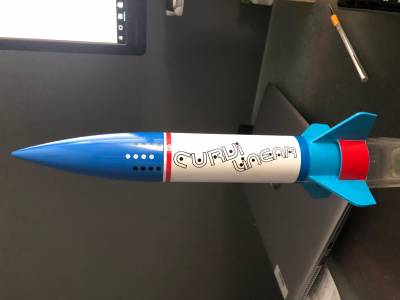 Estes Curvilinear is a basic kit with one challenge.  Getting the fins in place without breaking them is difficult at best as they are extremely fragile until the ring is glued in place.  The remainder of the kit is straight forward.

As mentioned, the fins are the only real issue during the build. After breaking the first fin during installation I decided to step back and look for ways to strengthen the fins before gluing them to the body tube.  My solution was to use very thin wood glue and paint on a couple of coats on each side. Understand that this will almost certainly close the slot needed to the ring so be prepared to use a sharp hobby knife and some sand paper to open it back up afterward.  I applied three coats of wood glue to the fins and placed them between wax paper to dry with a couple of heavy books on top to keep them flat.

Afterward I carefully opened the slot back up on the fins using a hobby knife and some 100 grit sand paper folder over to make it neat. After reading several reviewed that this rocket was under powdered on the mini motors i decided to upgrade to an 18mm mount. I had everything laying around to do the upgrade. From there i decided to use Kevlar line attached to the motor mount and elastic for the shock cord.  A quick swing test showed that I need a bit of nose weight so I added 1/4 ounce of clay to the nose cose with a couple of drops of CA to keep it in place.

Coming up with a paint scheme for this rocket was not easy. I really didn't care for factory colors and finding a way to get the lower ring a different color was making me nuts.  Finally I decided on a red, white and blue theme and did some simple masking. The entire rocket was coated in gloss white.  I then masked off  and the lower section was painted with Rustolum light blue while the nose cone was painted with medium blue by mistake :( Yes I had intended to paint them the same color but grabbed the wrong can by mistake.

Overall I'm happy with the rocket.

So far I have only had a chance to fly this one twice as the weather here is cold. First flight was on an A8-3.  Flight was straight and without drama.  Rocket stayed in site the entire flight.  Safe flight and recovery.

Flight two was on a B6-6. I used the longer delay as we were in a relatively small park. Off the pad the rocket was quickly out of sight but we saw the ejection pop and followed it down. Second flight was also drama free with only minor cork screwing during flight. The B6-6 seems about perfect for this model. Not sure i would go any larger.

Overall both flights were a success with safe recovery. After all of the cussing and swearing at the fins, I'm finally happy with this model and considering an upscale version using BT60/BT70. 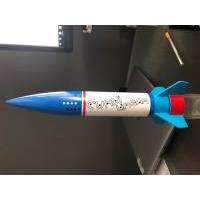 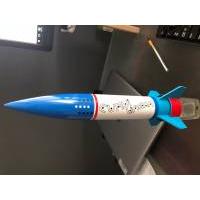