(Presented with written permission from RocketyPlanet)

My first thought when I was offered the chance to review the Heavenly Hobbies Brutus 2.6 Payloader was "you bet!" The Brutus is a 2.6 inch single stage rocket with a 29mm motor mount and a sizable payload bay. If kits were allowed in the Team America Rocketry Challenge (TARC), this could be a contender.

The day the box arrived from Heavenly Hobbies was a cold one here in the north. I didn't pay attention to the slight denting of the shipping box, but when I opened it I found that the nose cone had been crosswise in the box and when the box got dented, the cold plastic of the nose broke. So I fired off an email to Heavenly Hobbies and explained what had happened. They apologized and sent a new nose cone right away. It arrived in good shape. Although one instance can't indicate a trend, I felt good about their customer service.

Other than the nose cone, I noticed that all the parts were bagged in logical groups: parachute parts in one bag, centering rings, fins, and motor retainer hardware in another bag. A third bag held an entire stick of modelers clay (blue, if that's important). Heavenly Hobbies also included simulation software on a CD-ROM disk along with the directions.

The motor retainer is Heavenly Hobbies' Triiceps design, which is functionally similar to the PML Positive Motor Retention system. A triangular die-cut aluminum retainer fits over the nozzle end of a 29mm motor and three screws secure the retainer to the aft centering ring. Threaded T-nut inserts are included to install while building and the laser-cut aft centering ring has already been fully prepared to accept the T-nut inserts.

All the fins and centering rings are laser-cut from what appears to be nice quality birch plywood. The body tubes are white, matte finished paper tubes which accept glue very well. The coupler tubes are a hard kraft cardboard tube, slightly thicker and stiffer than the body tubes. I liked the choice of materials Heavenly Hobbies used for everything. The spiral in the body tube is very discrete - a few coats of Kilz should take care of it nicely. If it were more noticeable, I would use thinned Elmer's Fill and Finish.

There are no paper instructions included with the kit. As long as simulation software has been provided on CD, Heavenly Hobbies includes the construction instructions on the CD as well. The contents of the CD are the source of one of only two complaints, which I will get out of the way first so I can concentrate on the rocket.

Issue 1-A: The Instructions

I'm no Luddite; I am grateful for computers; my career with computers has provided sustenance for my family. However, my workshop is where I go to get away from computers. I don't want to look at a computer screen while I am building a rocket. So, I can overcome that personal problem by simply printing the instructions. I can even print them on recycled paper if I start feeling too guilty about killing trees.

The rocket is a very straightforward three fin rocket. There are no difficult steps to the assembly. Using five minute epoxy a person could finish building in a couple hours. I started to say that there were no surprises to the instructions, but I was wrong. As I was ready to glue the last part together I noticed something on the second page of the instructions - I completely missed this until it was too late:

Please note the second line that says to use epoxy unless specified otherwise. The instructions list wood glue, epoxy, and CA as necessary. Throughout the instructions the text says glue this part to that part in this order. For some reason (probably a personality defect), I do not associate the noun "epoxy" and the verb "glue." Based on the lightweight plywood and paper tubing of this rocket, I assumed they meant to use wood glue. Only after entirely building the rocket did I notice the sentence I reproduced above. That's my mistake, but honestly I don't believe the rocket suffered at all. Either epoxy or a high quality wood glue, like Titebond or Probond should work okay. One advantage of building with epoxy would be that the solvent in wood glue (water) can soak into the paper tube and cause a slight swelling or deformation that would not happen with epoxy.

The simulation software is a very nicely formatted Microsoft Excel spreadsheet. Like the instructions, it would be better if it was platform agnostic. Yes, I know that one can use open source software like Star Office/Open Office, etc., but one should not have to.

A far worse problem is that the software is not predictable. You must change the variables in just the right order or you get nonsense results. At least the results are recognizable as nonsense. After a frustrating time with the software I stopped using it. If fixed, this would be very helpful to use with the Brutus.

The kit is a large kit with a 2.6 inch lightweight body tube and a large compartment into which the parachute can be stowed. Mylar parachutes have a place in very small kits with minimum volume, but I just don't like them.

The construction of the rocket was absolutely without surprises. Each section is built separately and then assembled.

The fins and centering rings are all very nicely cut thin plywood. All were flat with nice edges that did not require cosmetic attention. The tubes are all very similar to Estes body tubing and the nose cone was a typical blow-molded plastic elliptical nose cone.

The spirals on the body tube were very unobtrusive, but I used Kilz primer to make them even less noticeable. The cuts on the ends of the body tubes had a very slight misalignment that cleaned up quickly with a piece of medium sandpaper.

The fin can/motor mount assembly fits together very well. The instructions mention that the builder might need to file or sand the fin slots to fit, but I found the fit to be excellent, needing no trimming or sanding.

The motor mount is built and mounted in the body tube, but the aft centering ring is not glued into position yet.

The aft centering ring is then removed and the fins are glued in position. I put good fillets on each fin where it met the center motor mount tube and inside the body tube. I put a lighter fillet on the outside where the fins protrude through the body tube.

The T-nut inserts are the three pronged variety. The instructions call for them to be hammered in place from the back, then gluing the aft centering ring into the body tube.

For this rocket I would recommend an additional step of epoxying the inserts into place as well so they don't come loose. Those three prongs will not prevent a retainer from jarring loose or being popped loose if the rocket falls on its base.

After mounting the T-nut inserts, I ground some of the insert's flange away to provide clearance for the motor mount tube to slide through the centering ring. The instructions call for breaking off a tab and prong from the T-nut insert, and that would work if you didn't have a way to grind a little clearance, but you would lose one prong from each insert. Very little metal had to be ground away.

I like the Triiceps motor retention design and I hope that Heavenly Hobbies will make it available as an aftermarket part to be purchased for use with other 29mm rockets. Because the metal plate is aluminum, it is very lightweight.

After building the fin can and motor mount assembly, the modeler builds the Amaze Ejection Baffle System. This consists of two plywood bulkhead plates with holes drilled in one half of each plate. One plate is also center drilled for a screw eye.

Both plates are glued into a coupler with the holes rotated 180 degrees away from each other. This allows the ejection charge to work, but prevents hot particles from shooting through the holes and burning the parachute. It is very simple and very effective.

Although the Amaze Ejection Baffle System would be very easy to duplicate at home, I hope that Heavenly Hobbies markets it as a separate product as well.

The nosecone is simply tightened with masking tape so the shoulder is a tight fit in the payload bay tube.

I took the rocket to the range and flew it with the Mylar chute first on a seven second burn F motor, which was all I had at the time. Seven seconds proved to be too long - the mylar chute had a couple of shroud lines stripped and wound up a twisted mess in spite of the swivel. I don't like mylar chutes anyway and quickly replaced it with a nylon chute I had in my chute box.

Flying on a RoadRunner F45-5, the rocket flew perfectly straight. The five second ejection delay proved nearly perfect. I used no wadding of any kind yet the nylon chute was unmarred by hot particles, thanks to the Amaze ejection baffle.

I would modify the kit with the following recommendations:.

The Brutus 2.6 Payloader is a very clean and simple design with a sizable payload bay. It can be assembled quickly and it should be very intuitive to any modeler with some experience. I enjoyed building it and I enjoyed flying it. It is more sturdy than most Estes kits, due to the plywood parts. The Amaze ejection baffle and the Triiceps motor retention make the rocket extremely quick to prepare and fly. As such, I will fly the Brutus 2.6 Payloader a lot. 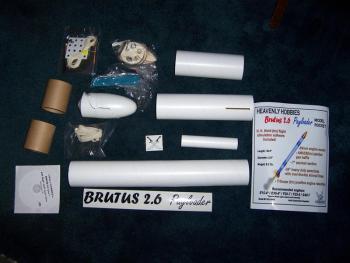 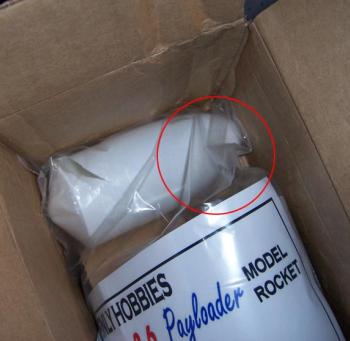 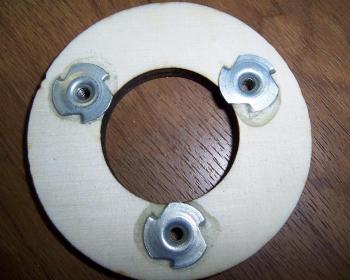 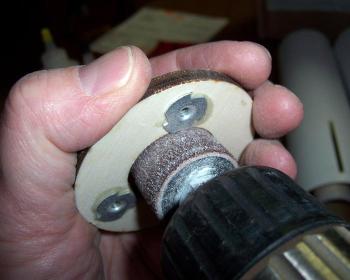 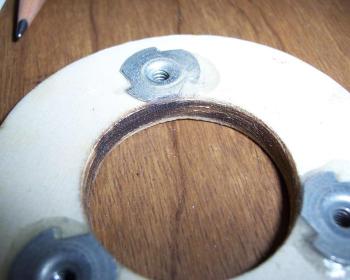 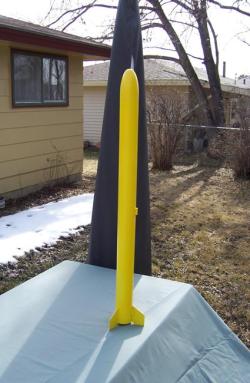 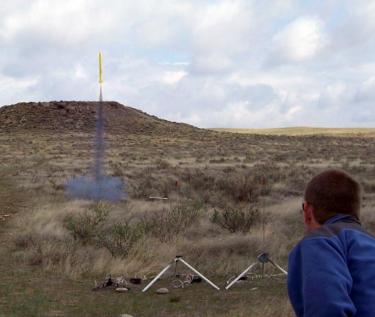 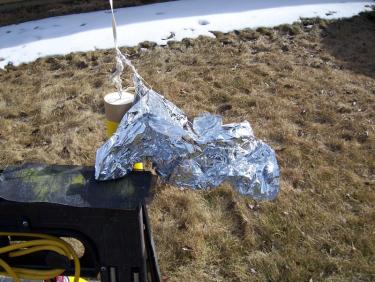