Descon And Now For Something Completely Different

Scratch - And Now For Something Completely Different {Scratch}

And Now For Something Completely Different...
Robert Galejs, NAR 69317


After reading all of the postings regarding why spool rockets are stable, I couldn't come up with a plausible explanation.
However, I did come up with an unusual rocket that I could explain. That's how "And Now for Something Completely Different..." came to be. 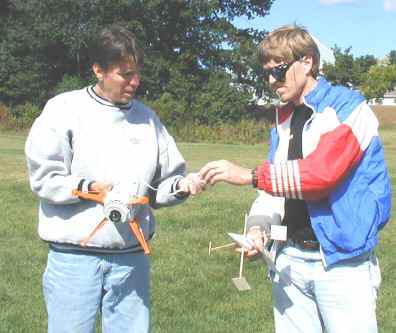 You can see me holding the prototype above next to Todd Lainhart with his Mars Lander. 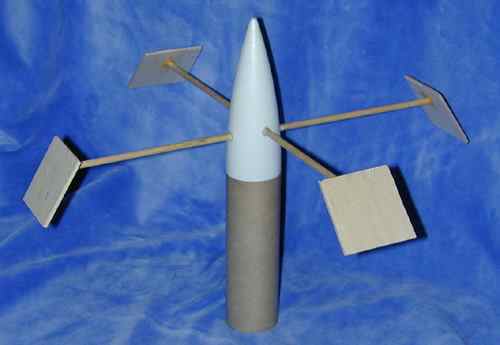 My rocket is made out of a 5" section of BT-60 and a nose cone from an Estes Loadstar.
Two 1 ft sections of 3/16" dowels are inserted through the nosecone, about 1.5" up from the base of the exposed part, so they form a cross and are perpendicular to the body tube.  The exposed ends of the dowels are beveled to a 45 degree angle.  Four 2" by 2",  3/32" balsa squares are cut out and glued to the bevels at the ends of the dowels.  These panels are glued 1/2" down from the front and centered side-to side.  After the glue dries, add fillets to the plate/dowel junction for strength. 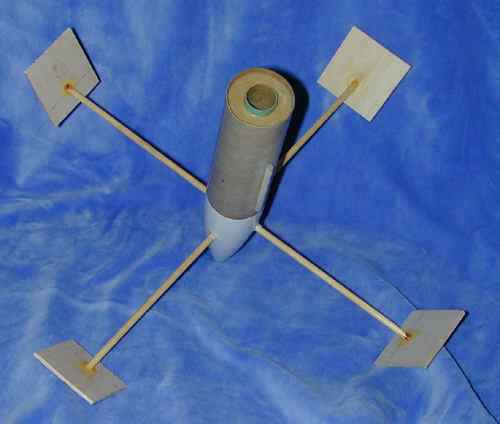 An 18mm motor mount is glued into the body tube and a short section of Kevlar® is used as a shock cord. 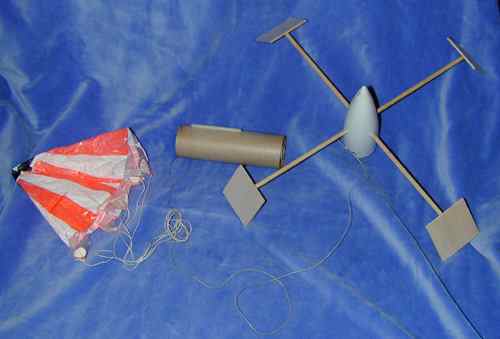 A 12" Estes parachute that I had lying around was used for recovery.

There are no "normal" fins at all.  I added a mixture of lead shot and Sculpey modeling clay into the point of the nose cone until the CG was at the base of the nose with a C6-3 loaded. 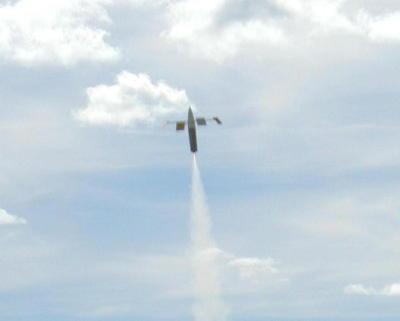 This rocket really does fly!  I've flown it four times (2 times on C6-3
and 2 times on B6-4).  It appears to be sensitive to the alignment of the
plates.  The first couple of flights were stable but kind of squirrely.  I then
adjusted the plates to be more uniform and it flew quite well but with a
spin. The picture below is from the 9/15/2001 CMASS launch in Tewksbury, MA.

Why is this thing stable?

A simple way to look at this model is to only consider two plates on a
single dowel.  When the rocket is flying forward, the two plates experience
identical drag and, assuming the dowel is centered, the net moment on the
rocket from these plates is zero. When the rocket tilts to the left, the right plate
exposes a larger area to the airflow than the left plate.  This larger area
experiences a larger drag force and results in a net restoring moment to the rocket.
Non-tilted plates would not have this behavior because the exposed areas
would be the same at all angles of attack.

Ignore the nose cone for now. By definition,

The two plates located along the axis of rotation do not give any net
moment, but do add to the normal force...

The Cd of a flat plate falls out of the CP equation for plates alone, but
is important when adding in the effects of other components, such as
the nose cone. The Cd is nearly constant (about 1.2, according to Hoerner
in "Fluid Dynamic Drag") from 0 to 50 degrees (0 degrees is a horizontal
plate). Somewhere between 50 and 70 degrees, the plates transition from
a stalled to lifting condition where their lift/drag behavior is difficult to model.
From 70 to 90 degrees, the Cd drops linearly to 0.  I would recommend not
designing this type of rocket with plates beyond 50 degrees, or, if you do,
do not rely on the above CP derivation. I will make the conservative
approximation that the Cd is 1 for the total CP calculation below.

Although the "swing test" for stability is not known for its great accuracy,
one was done for this rocket with varying CG locations. It seemed to
verify that the CP was near the point predicted above.

If you would like to design a rocket using these kind of plates, I
put together a simple Excel spreadsheet that you can download
below. This spreadsheet models a single nose cone, one transition
and one set of 4 plates.

DISCLAIMER:  This spreadsheet model is believed to be accurate but has
not been comprehensively tested. Please do not use this model as the sole
justification for the stability of a rocket, especially a big one.  Small
scale models are highly recommended.

One interesting thing to note about the plate CP is that it is located
well to the rear of plates, allowing for the possibility of a rocket that
is stable for *any* CG location since the CG must lie somewhere
between the front and rear of the rocket, but the CP could lie
behind the rear of the rocket.  This could be done by removing
the body tube and placing the engine up inside the nose cone.

"And Now For Something Completely Different" is similar aerodynamically
to flying saucer rockets like the Estes Snitch just not quite as draggy.
More plates on additional dowels could be added to make up the saucer section.

Adding these type of plates to short/fat rockets like pyramids and
cones might be an alternative to adding massive amounts of nose weight
to achieve decent CP-CG margins.  The plates obviously add a lot
of drag, but that is usually not a concern for these odd-rocs.

It would also appear that the plates on Mars Lander type rockets
(see Todd Lainhart with his in the first photograph) add a destabilizing
moment since they are angled the opposite way from those on my
rocket.  However, they are quite small in relation to the rest of the rocket
so they do not impact the CP significantly.

This rocket is very easy to build, it took me about an hour or so.  Just be
careful aligning the dowels and plates and you should be fine.  Its bound to
be a head turner at your next launch!

Thanks to Bill Spadafora for the CMASS photos.

Very cool idea.  I will have to make a few of them and give it a try