Brief:
I have wanted to enter the RMR DesCon for some time now. I could never seem to come up with a design that I liked and when I did get a design that I liked, it didn't fit the theme of the current DesCon. During the summer of 2000, I made a CD finned rocket. I wasn't sure what to do with it; it was heavy, looked bad, and I didn't know if it would fly.

When I heard about the theme of DesCon 8 being found (or flounder) parts, I thought for a while on a good design but got nowhere. I looked up and saw the CD finned rocket, that I call AOL, sitting with the rest of the group. I thought about it for a while and realized it would be perfect; Easter Egg nose, paper towel tube body, CD fins, cereal box centering rings, drinking straw launch lugs, a cotter pin, BB's, and some found elastic.

Construction:
CDs were cut in half with a utility knife (scissors will cause the CD to shatter). I sanded mine so they would not have AOL and MSN logos and text on them, this is optional. Then an approximately 45 degree angle was put on one end. This was repeated three more times to obtain all four fins. Once all the fins were cut out, I used hot melt glue to affix them to the paper towel tube (this is not an ordinary paper towel tube, it was from a commercial paper towel dispenser, it was fairly thick, 1/16 of an inch).

I cut 2 pieces of drinking straw about 1 inch long to place at each end of the tube for launch lugs. These were attached with hot melt glue also.

I cut about 4 dozen circles the same size as the tube out of a cereal box and soaked them in watered down Titebond II. After soaking for a few minutes they were removed and stacked together in 2 sets of 8 (you may ask, why the extras?, well they were for an extra one just in case something went wrong). They dried while being pressed in a bench vise. Once they were dry a hole was drilled through the center to allow the coping saw blade to be put through. A circle was cut in the stack of card board to allow the motor mount to slide in easily. The same steps were taken for the second centering ring. The rings were glued to the motor mount tube; when they were dry, the whole unit was slid into the body tube. The rear ring was about half an inch from the back end of the tube, this would allow the rocket to stand on the fins. Half of the space was filled with J-B Weld to hold the motor mount in and provide support to the old motor mount tube.

The Easter Egg that was selected for the nose cone was cut in half, I used the half that did not have a lip on it. I glued a strip of card board around the inside edge to allow the egg to fit snugly inside the tube. I added a lot of weight inside the egg, I'm not sure exactly how much but it's around 30 BBs. This was held in place with hot melt glue, while the glue was still warm, a cotter pin was inserted to allow a parachute to be attached to the rocket. The strip of elastic I found was glued to the hot melt glue with white glue.  When it was dry, I pulled on it to see if it would come free and it just popped off. The second time I glued it down, I put it at a different angle and used a lot more glue. Now I can pull on it and it does not come free, the glue does not even crack like it did before.

The shock cord was just glued to the inside of the tube about 2 inches from the top.

The rocket was finally built but needed paint. It started all yellow. I put a black strip in the spiral on the body tube and tried to continue it around the nose cone but I could not get it straight. I decided it would be easier to just paint it black. The body tube needs to be touched up with "Dandelion Yellow" to get rid of the black finger prints. The edges of the CD fins were painted gold with a paint pen. It looks good from no less than 3 feet away. I did not build it to look good, I built it to be sturdy and fly.

I have not had a chance to fly it yet. I hope to get the first launch done some time in April or May. 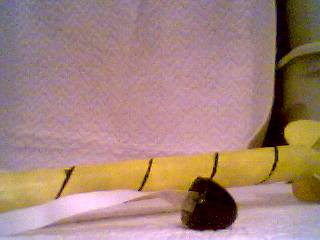 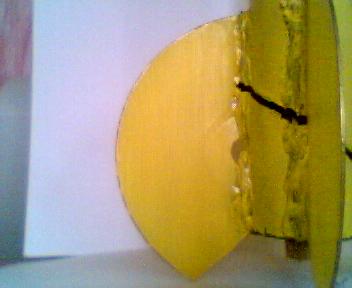 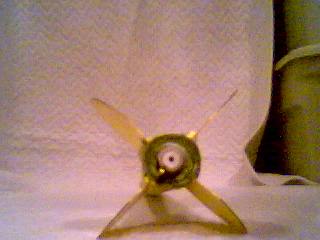 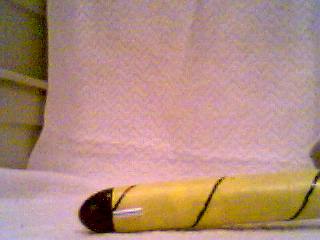