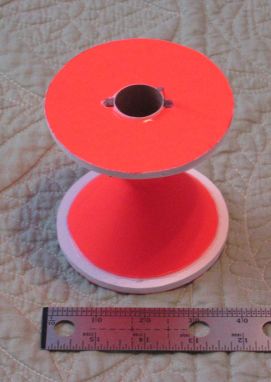 Brief:
The 24mm Long Hourglass is a spool-like rocket that uses many visual cues and construction techniques from Art Applewhite's other designs. As with all of Art's kits, the Long Hourglass relies on a high drag design to limit altitude and create a tumbling, aerobrake recovery for a safe, close return. And did I mention, SPOOLS RULE!

Construction:
The build is like building one of Art's Delta Saucers inside-out. There are only four parts that make up the Hourglass: cardstock for the cones, top, and bottom, foamboard for the top and bottom discs, 3.75" long 24mm motor tube, and 3.75" motorhook. Even though it won't take more than an hour of your time to build, don't underestimate this kit. It is a challenging build, especially if you've never built one of Art's kits before.

You start with cutting out and gluing the 2 paper shrouds to form them into cones. Next, the remaining cardstock is glued onto the foamboard and let dry. You want to make sure that there is enough glue to cover the cardstock yet not so much that it causes the cardstock to swell or wrinkle. Then, with a sharp new #11 X-Acto blade (or I prefer a razor utility knife), carefully cut out the 2 discs that will make up the top and bottom along with the center holes for the motor mount tube and launch rod/motor clip holes. 220/250/320 grit sandpaper may be needed to help smooth out any rough edges or assist with parts fitting together. The motor mount tube has a 1/8" slot cut 1/4" from one end of the tube. The motor hook is inserted into the tube & held in place with a couple wraps of clear cellophane tape around the middle of the tube. 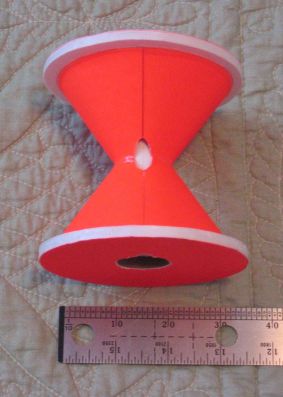 The top disc (the one without the motor hook hole) is glued and filleted onto the motor tube at the end where the motor hook extends into the tube. Returning to the shrouds, one is slid onto the tube so that the large, open end faces the top disc. The second shroud slides on the opposite way. Hold off on gluing the shrouds until after the bottom disc is attached. The shrouds on my kit more than made for a snug fit, requiring some minor trimming of the smaller end and launch rod holes for a proper fit. In communicating with Art during the build, he assured me that this was an early production mistake and has already been fixed in current kits. With the top disc and both shrouds in place, a small ring of white glue is smeared ont eh aft end of the tube and the bottom disc is fitted into place so that it lines up with the launch rod and motor hook holes until ~1/16" of the motor tube is exposed out the aft end. That small bit of tubing then receives a fillet of white glue for support. 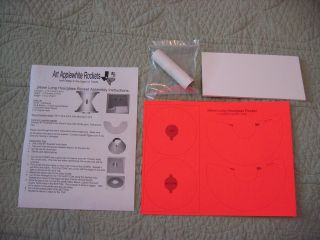 Finishing:
Typical of Art's products, no painting is required, which I know is a big plus for some rocketeers out there...although that means that you have to make a color selection at the time of placing your order. Art does suggest that you clear coat the entire model to help protect it from the elements. Before clear coating (or painting) though, white glue needs to be smeared along the exposed edges of the foamboard, as the chemicals in the paint will dissolve the foam! And even if you choose not to paint the Hourglass, it's still a good idea to seal the foam. I've built several of Art's products and have not clear coated any of them but I still took the time to seal the foam edges. If I had one complaint (and it's very minor, really!) about the Long Hourglass, it's that not all of the surfaces are colored to match. (Although in retrospect, I certainly could have used the leftover cardstock to accomplish this--without having to resort to paint it!)

Flight:
The Long Hourglass is designed for 3.75" 24mm motors like the Estes E9 and Ellis Mountain E10-6. No spacer is included for shorter (2.75") motors, but to ensure the rocket's stability, I think Art (and I) would suggest that you build/fly/use the (standard) 24mm Hourglass rocket if you want to use those shorter motors.

I have learned from building and flying many spools, that spools (and all high drag rockets) perform best when combined with low thrust, long burn motors. With their light mass (less than 1oz for the Long Hourglass), they don't need much to get off the launch pad but they need a steady source of thrust to keep them up in the air. The end of the thrust phase and apogee occur pretty much simultaneously. Unlike the graceful, direct downward glide of Art's saucers and Qubits though, spools almost always go into a rapid end-over-end spinning tumble.

Although it isn't on the recommended motor list, I decided to be a brave soul and fly my Long Hourglass for the first time on an AeroTech SU F21-4W with the ejection charge removed. With the Copperhead ignitor readied with some masking tape, the Long Hourglass was set on one of the mid power pads. It pleasantly ignited on the first try and zipped off the pad to well over 300 feet.

Recovery:
Not only is there no recovery system to prep, but there's nothing that can fail either! Even on windy days, you can expect to have short walks to recover the Long Hourglass.

At the very end of the thrust phase, the rocket went into a rapid spin, which really surprised almost everyone watching. There was no danger of it coming back with any problems though as it then tumbled slowly back to the ground end over end and landed impressively close to the pad. Unfortunately, we launch off of an asphalt surface so one of the discs and shrouds bent slightly from the impact. The damage was minimal enough so that it can safely fly again...and on another F21 at that!

Summary:
With the bright neon colors and paper shrouds, there's no doubt that this is a true Art Applewhite design. Unlike some of the spool rockets I have previously scratchbuilt, the Art Applewhite Long Hourglass is designed to last.

For a bit more on the 24mm Long version of the Hour Glass, check out Dick Stafford's review here