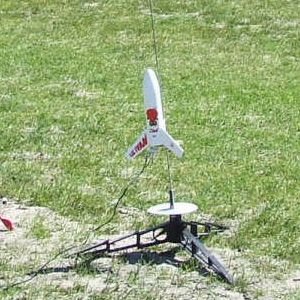 Brief:
This is a nicely detailed Semroc retro-repro clone (KV-49) of Centuri's 1982 Lil' Ivan (#5353) that incorporates modern technological advances like laser-cut fins and Kevlar-mounted shock cord. It reminds me of the Estes Baby Bertha but I feel this Semroc kit to be superior in terms of quality and looks.

Construction:
The parts list is covered in Chan's review so I won't elaborate here.

This is a great, easy 3FNC kit to put together with no 'gotchas' during the construction process. As has been the case with all my Semroc kits, the components are absolutely top quality and everything fit into place beautifully. Semroc continues to provide a beautifully detailed color booklet containing the build instructions that are so easy to understand that I'm of the opinion they only need to be read once or twice for a novice to get the gist of them. 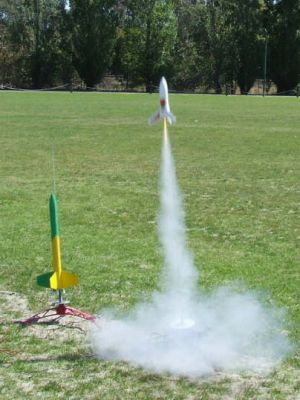 I then proceeded to slightly roughen up the body tube with 240 grit sandpaper to enable better glue and paint adhesion after which I tackled the fin marking steps. Fin marking is provided by a fin guide in the instructions booklet consisting of a circle with hash marks by which the end of the body tube is placed on the circle and the hash marks used as a guide for fin position markings. I then gently loosened the laser-cut fins from their balsa sheeting and gently airfoiled the fin leading edges with 360 grit sandpaper for improved aerodynamics. From there, I tacked the fins on with medium CA, following this up with white glue for multiple layers of fin fillets. Following on from this, the launch lug was added. Finally, I also applied thin CA to the top of the body tube so as to lessen the chances of the Kevlar® causing any body tube zippering during recovery. 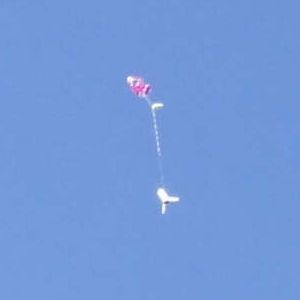 With the exception of using CA to tack on the fins and stiffen the top of the body tube, I used Selleys PVA white glue throughout the construction process.

Finishing:
This rocket I found to be almost a no-brainer to finish to a nice, pleasing standard. I filled in the balsa fin grain and the balsa nose cone with two applications of NHP Micro-Fill model sealer which nicely sealed all the balsa smooth and then gave the rocket two coats of Tamiya Fine White primer with light sanding in between using 400 grit sandpaper. I followed this up with an initial coat of Tamiya Pure White enamel gloss all around. I let the initial paint application cure for 24 hours and then lightly wet-sanded all round with 800 grit sandpaper after which I gave the rocket a second coating of Pure White. This made the finished paint job silky smooth. I did not bother with clear coating the rocket in order to keep the rocket's weight down and also because I am wary of any enamel-based clear coat possibly dissolving the applied paint.

After having allowed the paint to cure for a full week, the lovely red-colored waterslide decals were then carefully applied. I found these to be quite durable and easy to apply.

Flight:
Motor retention is by use of a short and springy motor hook which has shown itself to be quite durable.

Wary of the seemingly frail Semroc-supplied crepe paper streamer for recovery, I substituted a 12' Semroc parachute with a small spillhole cut into it instead (please see my Specific Rocket Tip) and prepared the rocket for its maiden launch. The first flight was with an A8-3 motor with two squares of recovery wadding. This was hooked up to my Estes Electron Beam controller and the rocket soared into the sky with a beautiful straight boost to around 150-160 feet with a seemingly perfect apogee at ejection and a beautiful descent with its parachute deployed. Most impressed with this maiden launch, I had unfortunately run out of A8-3 motors so I decided to take my chances with an A8-5 motor.

The second flight with the A8-5 was just as great as the first but using an A8-5 was most definitely a bad choice as ejection was very late and the rocket was about 20 feet away from the ground by the time ejection occured. The rocket still landed gently and appeared to have not suffered any damage.

It was only much later that I noticed the rocket had a small gouge in the nose cone which may have likely occured during the second flight. Since then, I have stuck with A8-3 and B6-4 motors as per Semroc recommendations.

Recovery:
The Kevlar®/elastic recovery system has proven to be very reliable and has held up to repeated flights without problems. The use of a 12" parachute, even with a spillhole, has enabled the rocket to make nice gentle landings every time although I would like to try using a 9" parachute--if I can obtain one!

The one thing I would nitpick this rocket for is the provision of a streamer for recovery as the streamer material is a rather frail crepe paper which could easily catch on fire if not enough recovery wadding is used and/or a motor with an over-zealous ejection charge is used. The streamer will also be unlikely to slow the rocket sufficiently for a relatively gentle landing thus making fin breakage quite likely to happen.

Summary:
The Semroc Lil' Ivan is a marvelously improved recreation of the original Centuri kit and one which is sure to impress rocketry novices and BAR's alike. The top quality components make this an awesome, fun little rocket to put together and the finished product with its marvelous Cold War era decals are guaranteed to bring a smile to any rocketeer's face. You definitely can't go wrong with the Lil' Ivan.

This is a fun little rocket, though I concur that there just isn't much space for the streamer in the body tube. I also concur that the streamer doesn't seem to slow it enough...on the maiden flight for mine, she came down hard enough to pop a fin off (and that was with landing in grass). I'm replacing the streamer with a small parachute.

The quality of the components of this kit really struck me. Their balsa nose cones are second to none and the laser cut fins were perfect. The only thing I did to this rocket was switch to a 12 inch nylon parachute. It is a little tricky to get everything into the rocket but it is well worth it as well as it flies. This will be a favorite rocket in any fleet.

Typical Semroc kit, great quality. The balsa nose cone, and laser cutting were perfect. The other thing that impressed me was the instruction booklet that included the full size fin pattern. Easy, and fun to build.