A "Tri-Copter" design, with a bit of attitude. 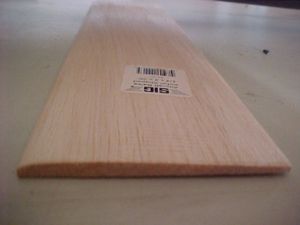 The wings are made from 4" x ¼" SIG pre-shaped airfoils. These can be found at www.sigmfg.com and they ship fast. These were cut to 18" lengths and given a light sanding to finish the air foiling and round the tip leading edges. One layer of 4 oz fiberglass was then applied to the bottoms of all three wings.

A 1" piece of ½" brass launch lug tubing was used in the center for a launch pin. This was so it would fit on my Alien Enterprises Monocopter launch setup. The three leading edges were tipped up about 10 degrees and placed touching the launch lug. The tips of the wings needed to be propped up to keep the trailing edge of the wings flush with the workbench. This assembly was then epoxied into place. Once hardened, the gaps between the top of the trailing edges and the bottoms of the leading edges were filled in with foam and caped with a thin piece of balsa. 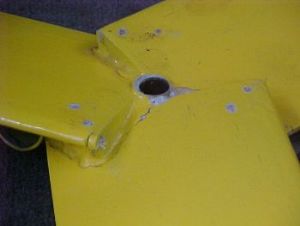 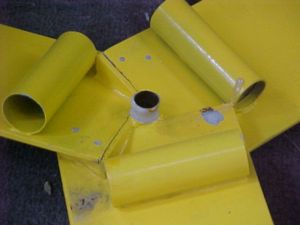 Three 2 7/8" 24mm motor tubes were made with 1/8" motor blocks and glued directly to the bottom of each wing. Their alignment was perpendicular to the axis of each wing. 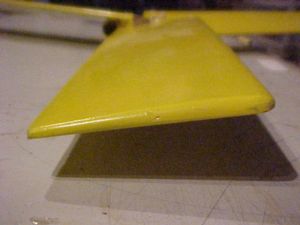 The three motors glued directly to the bottom of the angled wings provide a slight lift as well as the needed rotation. Having them close to the center of rotation reduces the initial liftoff speed, but allows faster rotation at burnout.

Finishing was nothing much more than a coat of primer and three coats of yellow.

The first flight attempt was on three C6-0 motors, but only one of them lit. Still, it went to about 15 feet and gently came back down. For the second attempt, I went for broke and installed three E9 motors, not having enough C motors. All three lit and it jumped off the pad faster than many rockets I've seen. At about 75 feet she just couldn't hold together and the three wings separated.

The three pieces were carefully mended with epoxy and a new launch lug was installed. Once the epoxy was hard, I drilled holes from the leading edge of one fin, through the foam and through the trailing edge of the next wing. 1/8" hardwood dowels were glued in the holes with Gorilla Glue.

The third time is a charm, right? This time I used three D12-0s. They all lit and it went to about 150 feet. An inspection shortly after the flight revealed that the exhaust from one motor lit the front of the adjacent motor. That burnt the leading edge of one of the wings and most assuredly robed it of quite a bit of power. 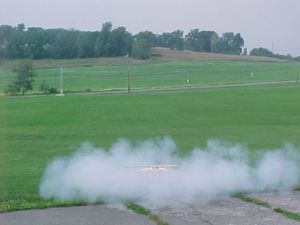 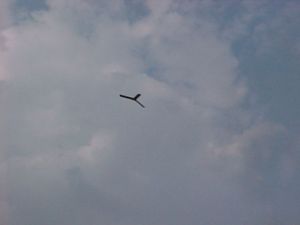 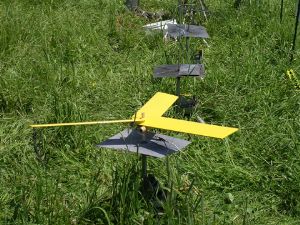 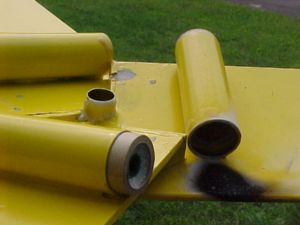