(03/19/02) I started enjoying the Quest MicroMaxx system recently and wanted to check out another company's kits. Well, there are (were) only two that had any kits. Nano Rockets and Aerospace Speciality Products (ASP). I purchased the Micro WAC Corporal with Tiny Tim Booster and the Micro Jayhawk from ASP to build on a winter vacation. Once received, I was pleased to see that even though these are "micro" kits they are in no way "micro" in quality. In fact, the ASP kit parts and instructions are of higher quality than a number of other "standard" kits that I have put together. So, needless to say, at first glance I was impressed.

The instructions are on 4 pages of 8.5 x 11" paper and include illustrations as well as cutting and alignment guides. They are clear and thorough instructions telling the modeler exactly how to be successful in building and flying this rocket.

After sanding the outside of the body tubes to get the shine off, they are marked using a cut-out marking guide and a provided styrene angle. The styrene angle is a nice little provision for marking the tubes, but I found mine not quite rigid enough as I ran the pencil up along the edge. It was functional though and if care is taken would provide the functionality necessary.

The fins are cut out using fin cutting guides. It is recommended to use double-sided tape to keep the guide attached to the styrene strips. ASP keeps with their intentions of having "detail accurate" kits, even in the Micro scale as the instructions give direction in the rounding the correct corners on the fins. The styrene material is also nice as it doesn't make the fins too thick in relation to the size of the rocket. On the other hand, this thin material that is cut into small tiny fins takes some effort (and patience) to work with. The instructions suggest having a pair of tweezers. You'll want to use CA (as recommended) while assembling this kit. The faster the drying time the better as long as you are accurate in your placement.

The paper coupler is cut in half and used to hold the split lead shot with the Kevlar® shockcord tied to it in place in the upper-most part of the body tube. The nose cone is glued into place. The rocket's separation point is between the booster and sustainer.

One of the styrene half-rounds is used as the detail of the conduit on the side of the WAC Corporal. You are instructed to cut it to size and somehow I missed that and used the piece at the length provided. I'd lose in a scale competition.

After the rocket is mostly assembled but still in two separate pieces (booster and sustainer), ASP suggests some finishing activity. This is important as the clear coupler is still not installed. This is to protect it from any finishing activity so that it doesn't get messed up. Having it clear is to simulate the absence of a coupler here.

In my case, I finished assembly prior to doing any painting. I hand painted mine with Testors Model paint and a brush. It turned out okay (to me). I didn't apply any of the provided decals. All-in-all, I'm happy with the final looks of this rocket.

Overall, for CONSTRUCTION I would rate this kit 4 ½ points. Instructions were outstanding. Detail was outstanding. Material was outstanding. My only complaint (same as for most high power kits) is motor retention. Quest does it with a twist clip. I've done it with a paper clip. I can't wait to see someone do it some other way.

Before I write about my flight experience I should say that I did not attach the provided streamer. I just can't get into shoving a streamer into such a tiny tube. And besides all my Quest kits would destroy the streamer after just a couple of flights. ASP instructs that you can get the streamer in there and then also a couple of small "loosely wadded" flame proof wadding to protect it. ASP also provides a second streamer for when the first one wears out. I probably should have followed this instruction as you will see.

The first flight was nice and impressive, probably getting to 50 feet (and that's all you want for a rocket this size). Upon descent though it fell fast (remember I'm the one that didn't put in the streamer) as the sustainer lead the way in a stable straight down descent. This is no doubt due to the lead weight in the upper section of the body tube. 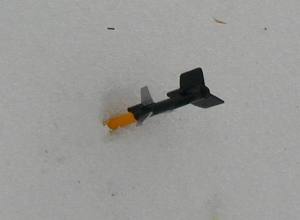 The second flight was also perfectly straight and about the same altitude. The ejection popped which kicked the motor and the rocket didn't separate. Now more so than the first flight it came in "hot". The fall was broken by icy snow which compressed the booster into the sustainer a bit. I'm thinking the fit of the clear tube with the Kevlar® shockcord on the side made the top on too tight. At the same time the motor might not have been in as "fictionally" tight as the first flight so the ejection charge kicked the least resistive piece. Motor retention could have stopped this.

I will humbly be adding the streamer for future flights and look forward to seeing its descent then.

For FLIGHT/RECOVERY, I would rate this kit 5 points. Not taking anything away for me not using the streamer. The design is excellent and the use of Kevlar® will hold up. I have a lot of confidence in the recovery system connections and they don't show on the outside of the rocket. The rocket was stable as it flew very straight. The nose cone is wood and didn't show any damage as it landed on the ground the first time and the icy snow the second time.

(Note: this picture was taken after the second flight)

Overall, the Micro WAC Corporal with Tiny Tim Booster is an excellent scale kit to fly in your backyard with MicroMaxx motors. I performs as good as any of the Quest pre-built rockets. The fin thickness makes it realistic in its size (proportions). It only loses some because of the friction fit of the motors, but in contrast with other kits, it has a thrust ring (the clear coupler). I believe that a motor retention clip is possible and that is should be implemented. I give the kit an OVERALL rating of 5 points.

Also for you fans of the WAC Corporal, ASP offers this MicroMaxx version as well as an 18mm, 24mm and 29mm version of this sounding missile.

The following excerpt is from "Sport Rocketry". The intention is to allow guests to get a basic feeling about a kit. We strongly suggest that you get a copy of the referenced Sport Rocketry and read the entire article. Inside you will find many helpful hints in construction as well as other useful information. For more information, use the two links above.

"The Micro Wac Corporal with Tiny Tim Booster from Aerospace Speciality Products is a scale model designed for Quest Micro Maxx motors."
"Unlike the models Quest makes for its Micro Maxx motors, you get to build the Micro Wac Corporal. . . . skill level intermediate . . ."
". . . the kit uses a clear plastic tube to couple the stages, with small plastic support struts glued to the outside of the clear tube."
"The motor's ejection charge fires through this clear tube to separate the Wac and Tiny Tim sections, connected by a Kevlar® cord."
"A mylar streamer is pulled out . . ."
"The fins for the model are made from styrene sheet plastic . . ."
"The kit includes an 85mm long piece styrene angle to help draw the fin placement lines along the body tube."
". . . sharp wooden nose cone . . ."
"Two water-slide decals form the stripes around the body near the bottom and top of the Wac"
"The model is very nice, the instructions are clear..."
"To improve the kit, I would suggest moving the launch lugs down by 5mm..."

The article gives me the impression that this is a good scale kit with minor modifications from an experienced builder.