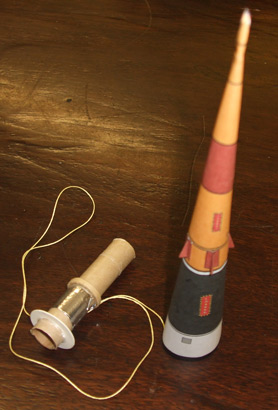 Brief:
This sprint is a 4.15 downscale of the Shadow Composites Sprint ABM. Or it’s a 1:48 down scale of a real sprint. The paper shroud was obtained from a paper rocket website.

Construction:
To make the sprint downscale you will need:

To build the kit I used: First make the outer shroud from the website. I used thin paper for this as I was going to make an inner shroud out of card which would be more sturdy and flame resistant.

The outer shroud markings are very different from the Shadow Composites Sprint ABM markings and I prefer this colour scheme. Using the outer shroud as a template I rolled an inner template out of card. The tip of the inner shroud was filled with clay to raise the cg.

The length of BT5 is cut down so that the rear of the tube was 3mm past the rear of the cone and a engine block was added. Next the centering rings were added and after a few test fitting were carried out, it was glued into place so that it is flush with the rear of the inner shroud.

The paper fins were added to the outer shroud.

A length of Kevlar® cord was attached to the BT by tying it around an 18mm engine block that was slid over the BT. A section of aluminium foil was added to neaten up the end of the cord. The other end of the cord was looped over the inner shroud and again more aluminium tape was added.

A small streamer was added to the cord. The sprint is small and light enough to recover without a streamer but thought it was best to be on the safe side.

Finishing:
One coat of cellulose sealer to proof the paper shroud and that’s it.

Flight:
Prepping is straightforward with no wadding being required. A few frangible links were added to the cord. The streamer is placed to one side of the motor. The core is then inserted into the shroud.

First flight was on a ½ A3-4-T. Somehow the outer shroud came off during boost, this caused the sprint to go wildly unstable.

The next flight was on an A10-3T. The flight was straight, a tube was used to launch as there was no chance of using a lug. From the smoke trail, it when more or less straight. Where the rocket landed remains a mystery.

CONs on recovery: With such a small bird, a much more visual aid to recovery should have been used - or a smaller motor. I like this rocket, but its just too small - next time i'll make a bigger downscale!