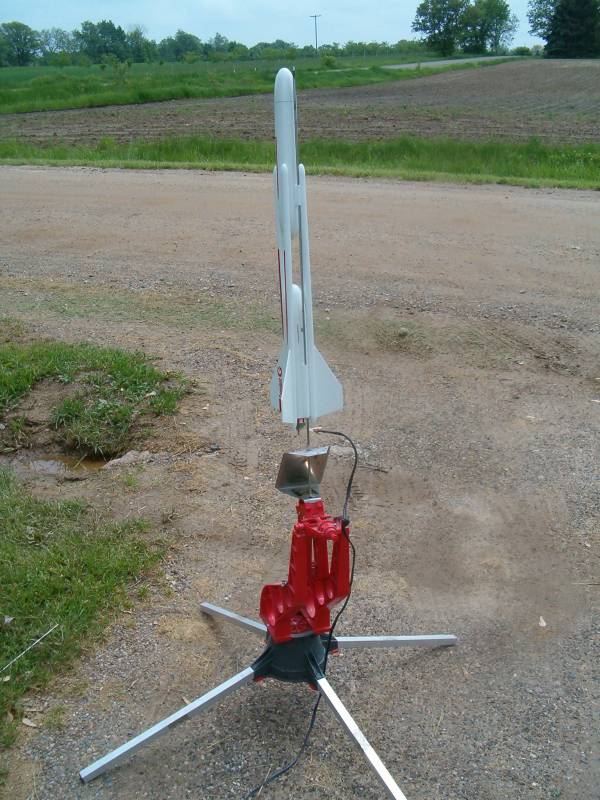 The Goonydent is Excelsior Rocketry's Goony version of the Estes classic Trident kit [K-33, 1233](1968-1974). It was by far the most expensive kit bash I've done so far at a cost of about $45.00. However the end results were worth the investment.

For this build I used the following components:

♦ 1- Set of plans and decals from Excelsior Rocketry

I had originally purchased the plans for this one back when I bought and built the '57 Goony (kit bash #7) when Excelsior was still in New York. Cash flow was low at the time when I wanted to order all the extra parts (mainly the NC's) so I decided to wait till the sixteenth Baby Bertha kit bash to do it plus I didn't feel up to the challenge yet so as such I stored the plans out in the garage for the winter. Unfortunately that was a bad idea as some of the decals were damaged when they stuck to some paper after some how getting damp. I went ahead and reordered new plans and decals, but when I received them the new ones had a Michigan logo in place of the NY one. No biggie, as I live in Michigan anyway, just means their in my neighborhood now .

Anyway, construction started with the 24mm MM and was glued flush into one end of one of the Baby Bertha tubes. I next took all the tubes and marked them for where the vent slots were to be cut. A CRITICAL note here: Make sure you use a fresh blade in your Hobby knife before making these cuts in order to get good clean cuts. Also a small section of aluminum angle iron helps in keeping them straight. At first I was at odds as to how to glue on the tubes and keep the slots lined up when I got the bright idea to tape two quarters together and insert them in the slots of the BT-5 tubes to help hold them in alignment as the glue dried. The Con: to that being that there was a small problem in getting them back out and required the use of needlenose pliers to extract them. After BT-5 tubes were first glued to the lower section the one balsa nose cone was glued in place. I used the balsa NC on the lower section as part of my design thinking as I figured it would hold up better and last longer than one of the plastic ones due to hot gas from ejection charge that would be hitting it.

I then placed one of the plastic Baby Bertha NC's between the BT-5's and proceeded to glue the upper section on in the same manner as I did on the lower. Again the quarters were used and were a little harder to remove with the extra NC in the way but I got great seals around all the ports. After glueing in the bottom PNC-60 to upper BT-60 tube I then glued in all six BNC-5's to their respective tubes. From there the fins were paper coated and when dry mounted and then the launch lugs were attached. After that all seams and joints were gone over and filleted where necessary. The final step was the recovery system. This I installed in typical Estes tri-fold fashion. 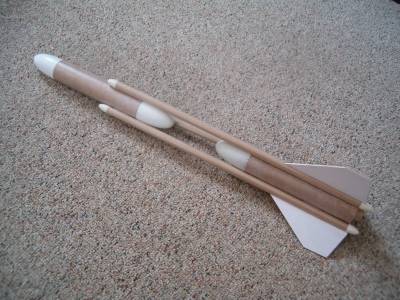 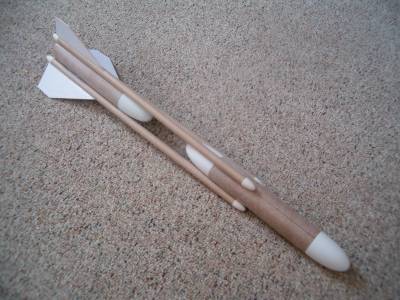 Finishing was as easy as applying two coats of Rust-Oleum 2x primer with a light sanding between coats and then two coats of Krylon Gloss White. Decals were then applied and went on without any trouble. After allowing them to dry overnight rocket got two light coats of Krylon Clear Gloss. 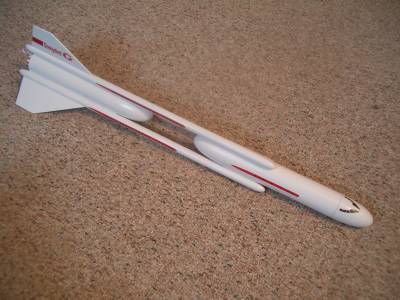 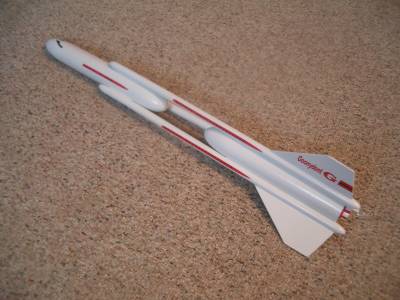 The instructions say to use only the D12-5 for flights. I have to disagree. This rocket has the same weight of both the Estes Prowler and the Estes AIM-120 AMRAAM at 4.2 oz. Both of those rockets fly on the following recommended motors. The B4-2, B6-2(first flight), C5-3, C6-3, & C6-5. As such for the maiden flight I grabbed my 24x18mm adaptor and loaded up a C6-3 and took her out to the launch pad out back of my place out in the country. Countdown was given and the fire button pressed. Rocket left the pad quickly and climbed up to at least 200' or better with a slight corkscrew.

Recovery was handled by an 18" plastic Estes 'chute reefed with a 3 1/2" spill hole. Ejection charge fired just before rocket tipped over and she descended at a reasonably safe speed with some slight wind drift into the neighbors field across the road about 65' from pad. No damage on recovery.

This is a costly, difficult, and time consuming build but when finished it is worth every drop of blood, sweat, and tear that goes into it.  Sure to be a crowd pleaser.

Overall Rating: 5
Other
2nd flight was on a  C11-3 at my goto field Francis Park, here in Lansing. Good lift-off with ejection at apogee but parachute didn't deploy properly. Got tangled with NC & shock cord. Came down parallel with ground & cracked the fin seams on the two fins that hit the ground first. Rocket will be repaired.
Still haven't got it out to fly on the shotgun 'D' motors yet to see how she holds together, but so far no cracks in the vent ports in spite of the hard 2nd landing.

Steve, Great idea using the two quarters to get the tube vents in alignment.

But you are right, they might get stuck! Still, if I ever build another Trident styled model, I'll give it a try.

Yeah I should have mentioned that as long as you wrap the quarters in Scotch tape there not to bad to remove as the white glue can't adhere to the tape very well.