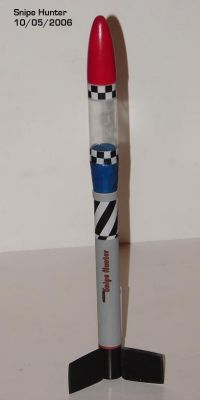 Brief:
The Snipe Hunter is a pretty small carrier rocket with the ever fun clear payload section. It's part of the Semroc Retro Repro Series tracing its heritage back to the Centuri Snipe Hunter KIT KB-13 #5043.

Construction:
This is your standard Semroc kit, which I have come to fully take for granted. It has all those great features that Semroc seems to be bringing back:

As with all Semroc kits, the instructions are superb. You basically build the rocket based on sub-systems: engine mount assembly, body and fins, Nose cone and payload area. If you've built any of the smaller Semroc kits, the instructions should look pretty familiar. You are given a step by step guide on how to build the engine mount: attaching the motor hook to the motor tube body, tying the Kevlar® portion of the shock cord to the thrust ring, inserting and gluing the thrust ring to the engine tube, and gluing on the centering rings.

Fin prep and assembly is as it should be: pop the laser cut fins out, sand and treat, and attach. The instructions include a marking guide that you stand the tube on to get the initial fin placement.

One suggestion on the fins: Sand them all at once while they are still attached to the balsa stock flat. It makes it a lot easier!

The most interesting feature of this kit is the clear payload bay. It's a small clear space that is a little larger than the actual body tube and uses a balsa transition to hold it in place. The kit recommends gluing the transition end to the balsa and press/friction fitting the nose cone in place. To make the payload section accessible from both ends, friction fitting as tightly as possible seemed like a better idea.

The Snipe Hunter also had a "reinforcement" band that fit on the upper outside of the body tube where the lower balsa transition inserted to the body tube. I'm not sure if this was there to make that area stronger for accepting the payload section or if it was to decrease the chance of zippers.

Finishing:
Not being very creative, I tried to match the line card as closely as possible so my paint scheme is "factory" stock.

Flight and Recovery:
>The rocket comes with a plastic 12 inch parachute. Much to Semroc's credit, they give you a two part shock cord on even this lower priced rocket. The body tube is a bit difficult to pack with wadding and a chute as it is fairly thin for my fingers. I used a small dowel to help compact the wadding and push the chute into place. (It's a hazard of having short, stubby fingers I guess.)

I moved up the chain on the engines. All initial launches were done without payloads. The flights using the A8-3 and B6-4 were fun and pleasurable launches, however, the C6-3,5,7 were not. This rocket is very light and with any of the C6 series it ended up out of sight quickly and required a good bit of effort to try and track.

The other "downside" to this model is that they suggest the higher end of the scale when it comes to delays. The suggested engines are A8-5, B6-6, and C6-7. Around me these engines are not readily available nor is there really the choice to buy them in a bulk pack, save for the B6-6. The rocket >did not seem to suffer using the standard ABC/345 series of engines.

When shifting to a payload, things got much more interesting. For a payload I went with a very small LED flasher that I got free at a trade show. The LEDs fit in the payload section perfectly and really lit up this small rocket. I did some dusk launches and it the payload was fairly easy to see on the As and Bs but was harder to track at about 1200 feet on the Cs. I'm not exactly sure what other payloads people might try and put in this rocket as the section is fairly small even for the most Lilliputian of altimeters or other rocketronics. A cricket would fit nicely but watch out for People for the Ethical Treatment of Crickets.

In the end, the 7th flight was the killer, launched on a C6-7 with the LED payload. It took off for parts unknown. Well I actually knew where--it was 60 feet up in a tree flashing quite happily but it was and still is inaccessible but is no longer flashing. Foolish me for continuing to try and launch it on a C6 without having tons more space.

Summary:
>It might seem odd that I'm giving an overall of 5 out of 5 while not giving it a 5 out of 5 on anything else but I've "learned a lesson" in the process.

After losing my first one I bought a couple more, and when I stick with the As and Bs, I've never had a problem with recovery. I only launch on Cs on much larger fields and have gotten them all back.

The kit itself is very well done and a significant value for the price. I was able to pick up an original Snipe Hunter and this kit is light years ahead of its original namesake. This Semroc Snipe Hunter is the way the kit should have been built and packaged in the first place. It is the standard for the Snipe Hunter setting the bar pretty high should anyone else re-issue this kit.

I have one built like the review. As stated, it really gets up there on larger motors. I have a second kit that I plan to build with a 13mm mini-motor mount. I think it will fly well with A3-4T empty and A10-3T with a payload.