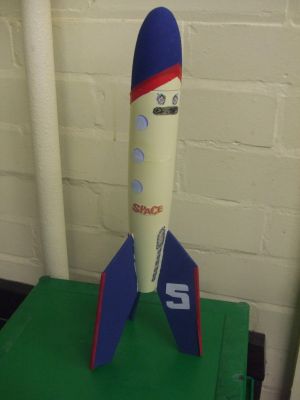 Brief:
My first attempt at building a rocket to match a picture. Originally I was going to chose one of the more complicated rockets, but procrastination took hold of me and a few weeks before the deadline I decided to go for the easy one mainly because I had the parts and the swept back fins gave it a chance of being stable.

The name comes from the nose cones-–an Estes Blue Ninja and an Estes Baby Bertha. Blue Baby seemed right, and the rocket is blue in parts. The five was added because that's the number on the rocket.

Construction:
The boat tail on the rocket picture was my biggest problem. In the end I went for an Estes nose cone with the tip cut off. Other components were:

To build the rocket I used:

Next using the body tube and centering ring, I guided the tube back in to the Blue Ninja boat tail to get the correct position of the centering ring. The ring was then glued into place using white glue. The body tube was then cut to a two and a half inch length.

A 18mm engine block then had a 2 foot length of Kevlar® cord tied around it and was then glued into place in the body tube. After the glue had dried, I glued the motor mount into the ninja boat tail using Bostik glue since it glues paper and plastic together much better than white glue or CA.

The body tube and nose cone assembly starts with the Baby Bertha nose cone having its base cut off to allow mass to be added to the tip of the rocket. There was a lot of mass in the plastic tail boat. A swivel was glued into place inside of the nose cone cavity so the shock cord could be attached. Next a one-inch length of BT-60 was glued onto the boat tail. The length of the body tube was just enough to allow the shoulders on the two original nose cones to fit.

All gaps and grooves were now filled with model filler and then everything sanded down with sandpaper starting with 120 grit and finishing with 400 grit.

A launch lug was then glued to the body tube. The lug is very high up on the rocket as this is the only place on the rocket that is in line with the motor. There was little option here. 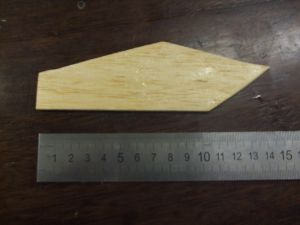 I wish I could write about the scale drawing that I did to get the fins perfect. In reality though, I sat at my desk with a picture of the rocket and some balsa and started cutting. In the end I had a fin then seemed to match the picture so I used that as a template and made 2 more. The root edge had to be carefully sanded to match the curvature of the boat tail.

The fins were then sealed and glued into place on the boat tail. I filleted the fins three times. This is the rocket's major weakness, the swept back fins will be the first thing to hit the ground and balsa glued to plastic is not the strongest of joints.

Two sheets of reusable wadding were attached to the Kevlar® cord and then the cord was attached to 2 feet of knicker elastic. The knicker elastic was then attached to the swivel in the nose cone. A swivel was then added to the elastic shock cord one foot from the nose cone. A twelve inch chute was initial chosen for its first flight, although a 15 inch chute was kept back in reserve. The twelve inch chute was on the small side but I only had 5 days before the deadline and Britain has spent the last few days in gale conditions with the wind rarely dropping below 20 mph--drift was an issue! 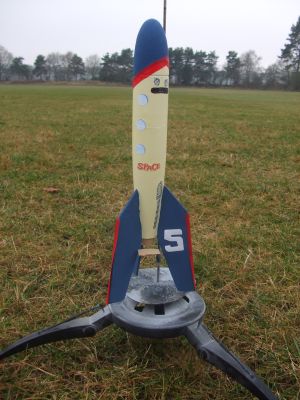 Finishing:
The rocket was primed and then spray painted yellow. The fins were then hand painted blue, as was the nose cone. The red bands were applied by using red tape.

The rest of the finish was down by cutting out images from the original picture and then gluing them into place. It's worth noting that I can barely hand write anything legible, anything artistic is in the realms of fantasy.

In the end it does not look too bad, although I am not looking forward to seeing the other EMRR 2007 Challenger's masterpieces next to mine. To make things worst, a friend suggested that I take the pictures of the final rocket using a mobile phone. I asked him why and he replied that if the pictures were all blurry, it might stand a better chance.

Flight:
Before prepping for flight I did a swing test to check for stability, and everything was okay. 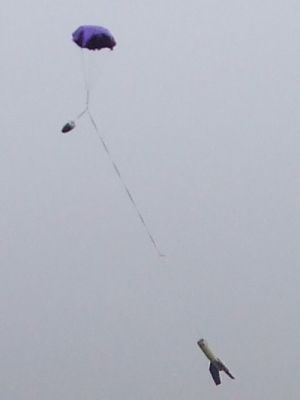 First flight. 14/December/07. The parachute was dusted and packed. Wind conditions were good. The winds that had been sweeping Britain had gone but it was now very cold. A standard Estes 3mm rod was used. An A8-3 was used. The flight was straight and true. Ejection was late, parachute deployed, and the rocket landed smoothly. On recovery I was pleased to see that the fins had not popped off on landing. An A8-3 is marginal for this rocket.

Second flight. 14/December/07. Now with a B6-4, flight was much higher than before. The chute opened at apogee, steady decent, and again, no damage.

Third flight. 14/December/07. I went for a C6-5. A C6-3 would have been better, but I had lots of C6-5 motors that needed to be used up. The flight was very high and had a lot of a wobble towards the end. Ejection was 1-2 seconds late, and the rocket drifted for 200 meters. No damage on recovery.

Summary:
PROs: First time I've built a rocket to a photo, and she flies well.

CONs: Boat tails from nose cones are slightly more expensive and lower the CG due to the plastic mass.