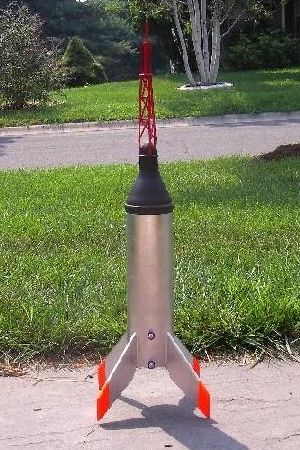 Brief:
This is a very stand-off scale model of the Little Joe I. It is 2.6" in diameter, has a 29mm mount, and is based on a custom-turned Mercury capsule that was donated by an anonymous guest for the Nekkid Rocket Photo Contest. On the real Little Joe I, the body is larger in diameter than the capsule. In mine, the capsule fits the body tube.

Construction:
The following are the major components used:

This was a straightforward build: 4FNC with through-the-wall fins. I got the measurements for the body tube and fins from Rockets of the World (RotW).

The fins are thick. Not that they had to be, but I had the 3/16" ply and delusions of beveling them heavily. I slotted the fin slots using a Dremel. To make sure I didn't chip the end of the phenolic tube at the slots, I inserted the rear centering ring. Next, I attached the front ring to the motor tube, with the end of the Kevlar® shock cord going through the ring. I used 5-minute epoxy throughout. The motor tube was then installed with the rear ring being dry-fit. The latter was then removed and the fins were glued in. Here I ran into a problem that I seem to keep making: I didn't check the alignment of the shock cord which was epoxied to the motor tube. Of course, it ended up perfectly aligned with a fin slot! The fix was easy, as I notched the tab on one of the fins so that it cleared the shock cord. 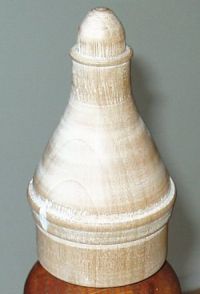 I made small external fillets and thick internal ones with Superfil. I also filled the spirals at this point. Finally, I attached the rear ring and the rail buttons. In order for the rail to clear the lip on the cone, I used oversized screws and an extra center spacer between the button and the tube.

For the nose cone recovery connection, I epoxied a small section of scrap bungee into the deep core that the builder drilled for me. I also added enough lead shot to make RockSim happy. With the heavy wooden cone, I wouldn't have thought any would be needed, but the thick fins and motor mount worked against its stability.

For the first flight, I did not build an escape tower. However, I since built one out of bamboo skewers, thin dowel, and a spent 13mm motor. A true scale purist may see the next mistake I made--I scaled the tower based on a 3" body vs. the actual 2.6" tube! I also have painted it per RotW, but haven't added decals. 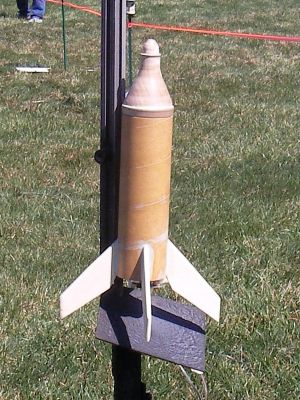 Flight and Recovery:
I flew the Little Joe on a 24mm F39-6 in my virgin Rouse Tech casing. I used a little dog barf, a chute protector, and a nylon chute. The flight was fairly fast, and ejection was just a little late. Recovery was fine. I am contemplating a G64 next.

Summary:
This is a sturdy but heavy rocket. As long as the phenolic stays away from thing like irrigation pipes, it should survive even hard landings. It is barely scale-like, which is good enough for me.