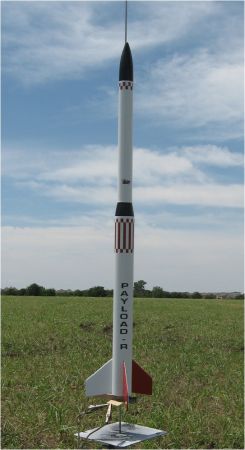 Brief:
The Payload-R is a very nice single stage payloader with the traditional lines that really looks and flies great! It flies on 18mm motors and recovers by parachute. I got my kit from John as a beta test kit. The rocket is slightly longer than 2 feet tall. The rocket will grab some serious altitude even on a B motor.

Construction:
The lower body tube is a BT-55 with a balsa transition to a BT-50 kraft tube used for the payload section. The 18mm engine mount is centered with kraft rings and installed flush with the rear of the tube. The extension of the fins below the body tube allows the model to be stood up without interference from the engine hook. The shock cord was super long as I modified the way it is installed. John has a neat way of looping the Kevlar® over the motor mount between the centering rings, passing it through a notch in the forward centering ring and then attaching the elastic cord to that. I used my standard tri-fold shock cord attachment. Having the Kevlar® already provided was a nice plus!

The balsa nose cone was very nice and required minimal finishing, but the payload tube had some pretty bad spirals that needed filling, more so than the larger rear tube. A screw eye is inserted into the base of the balsa transition to attach the Kevlar®/1/8" elastic shock cord combo and 12" mylar parachute. A 1/8" launch lug is provided which must be cut in half and installed at two points along the body tube. I angle-cut the forward end because I just think it looks cooler. The balsa fins are all laser cut and remove easily from the fin sheet. Waterslide decals are provided with the roll patterns adding that "real rocket" look to it.

The instruction sheet contains easy-to-follow, numbered instructions and helpful illustrations. The motor mount is a standard installation, except for the shock cord attachment as I described earlier, and includes an engine hook for positive motor retention. I very much appreciated the "small parts" bag that keeps all the little things in one place. A fin-marking guide is supplied to properly align the fins. John's instructions for attaching the fins using a "double glue joint" are very good. This method helps assure that the fins are aligned as placed, since they "set" much quicker. The laser-cut fins were perfectly matched and required minimal sanding, although I still used Elmer's Fill 'n' Finish to fill in the grain.

As is usual on any rocket I build, I installed the provided Kevlar® in the shock cord attachment with a loop at the end to attach the elastic shock cord. To minimize abrasion from the Kevlar® against the body tube, I soaked in CA around the top 1/2" of the body tube and tied a knot in the Kevlar® to meet the lip of the body tube. The parachute comes in a separate plastic bag, complete with instructions. Once assembled, you're ready for finishing.

Finishing:
The balsa nose cone, reducer and fins require standard finishing. I used Elmer's Light Fill 'n' Finish but any balsa filler will work fine. I followed the paint scheme on the face card and then went on to apply the provided decals. The decals are really thin but I used detergent to help them slide and they went on easily and laid down nicely. Once complete, I put on a thick coat of Future floor finish on all the painted/decaled surfaces to protect everything. It looks fantastic! 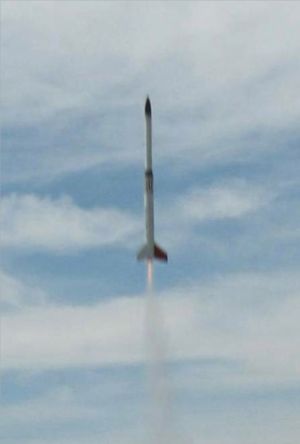 Flight and Recovery:
My first flight was on a B6-4. It jumped off the pad and flew straight as an arrow. The parachute deployed right at apogee and came down gently on the 12" parachute. I used a C6-7 on the 2nd flight. Wow! The rocket took off the pad with authority and zoomed arrow-straight almost out of sight. The parachute deployed again right at apogee and recovered perfectly.

Summary:
The Payload-R is another excellent rocket from Red River Rocketry that can be built in a few hours. The payload section will make it a unique addition to your fleet and it is reasonably priced. You'll need to make sure you've got plenty of room to fly if you put that C motor in though.