Level three projects pose a multitude of challenges. The airframe, motor and retention, shock cords and related hardware, CP and CG, electronics, and at the top of the list, the parachutes. In the early stages of my planning, I ordered a large surplus fifteen-foot diameter parachute, one of those white ones. I pulled the parachute out of the included deployment bag, and knew right away that I would not be using it. I felt like a magician pulling something out of my sleeve, it just would not stop coming. There were about two dozen very long shroud lines just waiting to tangle.

I looked at some of the economy large parachutes, but found these to be only slightly better than the surplus style. Then I looked at the Standard and Pro Experimental parachutes by Rocketman Enterprises, and my decision was made. The Standard Rocketman parachutes are made of 1.2 rip stop nylon and have very sound construction. The available sizes handle rockets weighing 1.5 pounds, up to 65 pounds, and are available in vivid colors. The Pro Experimental Chutes are substantially more durable than the standard chutes, made of heavy 1.9 rip stop nylon with heavy-duty shroud lines. My R3C drogue has 5/8-inch tubular nylon lines and the R18C has 9/16-inch flat nylon lines. The lines extend over the top of the chute (Fig-1). And best of all, there are only 4 shroud lines. I vacillated a while on which style to purchase as the Pro-Experimental R18C parachute is about $90 more than the standard R18C. I decided to get the best, and placed my order for an R18C for my main parachute, and an R3C for the drogue, both Pro-Experimental chutes. Rocketman Enterprises also offers a third line of chutes, the Ballistic Systems, however the R18C size is currently not available, so I did not look into these.


I used a very simple dual deployment design for my level three "Firebird" project (Fig-2). The rocket consists of three sections, the booster, main body and nose cone. The main body is about sixty inches long and has an electronics bay near the center. The two piston shock cords attached to the bulkheads which form the bay. The piston shock cords (Fig-3) consist of three sections of Kevlar® braided together. The shock cords on the cool end of the pistons are 2-inch strap. All the hardware used on the Firebird is 3/8 inch. Although the pistons protect the recovery components from the fiery ejection charge quite well, I also placed fabric parachute protectors below each parachute. Rocketman offers a variety of deployment bags and parachute protectors, however I used small yellow parachute protectors that I had on hand. The Rocketman parachutes shroud lines form a loop at the bottom, and are always perfectly centered. I used a single 3/8-inch quick link between the shock cord sections, and also fastened the parachutes to the same link (Figure-4).

When I received the RC-18 parachute I was very impressed by the quality of the workmanship (Fig-8). However, heavy duty means it's not light. I was concerned about the overall size and weight (four pounds). The Firebird is 8.75 inches in diameter, and 12 feet tall. You would imagine any parachute, shock cord and piston would fit easily. I just barely fit it in, the RC-18 Pro-Experimental parachute is about 14 inches long when rolled up (Fig-5-6-7) for a 8.75 inch airframe. I had to push down on the nose cone to install the shear pins. The R3C parachute I would be using for my drogue had the same type of quality construction, and I felt comfortable that it was substantial enough to handle the stresses of an early or late deployment (Fig-9). The drogue section of the firebird had a bit more breathing room.

Rocketman parachutes are available in sizes ranging from R3C to R18C; each size is rated with a minimum and maximum suggested rocket weight. The R3C handles rockets weighing 1.5 to 2.5 pounds, while the R18C capacity is 45 to 65 pounds. Because Rocketman chutes have a more complex design than standard simple round chutes, it is difficult to compare them. Based on some measuring and averaging, I arrived at these comparisons {R3C / 33 inch round) and the (R18C / 158 inch round). The R18C has a minimum radius of 41 inches and a maximum radius of 118 inches. The average radius is 79.5 inches, or a diameter of 159 inches or 13.25 feet.

On the second day at LDRS 19, the Firebird was prepped for launch, and an Aerotech Blue Thunder L-1500 was installed. This would be the first and only test of the Firebird before my level-3 certification launch. The 56-pound rocket glided off the Xtreme Rail and soared to an altitude of 3157 feet.

I was ready with my transmitter for the back-up drogue deployment, but the altimeter did it's job, and the booster and main body separated. The drogue chute deployed properly, but the main chute deployed at the same time. The flight appeared to be a perfect success and the sight of the Rocketman R18C parachute fully deployed cannot be fully described. However, for the certification flight with an M-1419 motor, the altitude will be over 5000 feet, and the main chute must not deploy early.

I decided to add four more shear pins to hold the nose cone in place while the drogue chute deploys. Naturally, another ground test would be needed to assure that the ejection charge of about 6 grams of black powder (8.5 grams in the backup charge) would shear all eight pins. Two days before the certification launch, the test was performed with the rocket tilted to 80 degrees, and was a perfect success. The pins sheared nicely, and the R18C popped out and unrolled on the grass. Time would tell if the eight pins would hold the cone in place at apogee.

On launch day, more care went into the preparation of the recovery system than any other area of the launch. The Rocketman Pro-Experimental R3C drogue and R18C main chutes were ready for launch. The powerful M-1419 sent Firebird on a beautiful straight boost to an altitude of 5611 feet. The R3C drogue deployed at apogee via the altimeter, the RC backup was not needed. The Pro-Experimental R3C chute allowed the Firebird, (now about 50 pounds) to descend rapidly. The PRIME landing area at Bong in Wisconsin is limited, and I wanted to land in it, or I would have used a Rocketman R4C for the drogue. I was ready to deploy the main R18C chute with the transmitter, however the altimeter did the honors when the Firebird descended to an altitude of 800 feet, the setting for the backup charge to deploy. The R18C Pro-Experimental parachute opened fully (Fig-10), a truly magnificent sight. Note how tiny the R3C drogue parachute appears. The Firebird landed about 800 feet from the pad and so close to the first tree line, that a portion of the main chute dangled from the edge of a tree.

Any level three project requires many hours of planning, building, testing, and a lot of cash. The Pro-Experimental parachutes were about fifteen percent of the total cost of the project. Sure, I could have equipped the Firebird with economy parachutes and saved a few bucks, but I wanted the best parachutes available; parachutes which will continue to perform flight after flight. Invest in the best, the Rocketman Pro-Experimental line of parachutes. 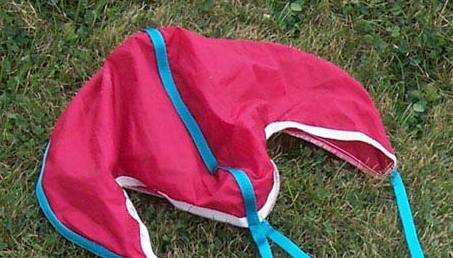 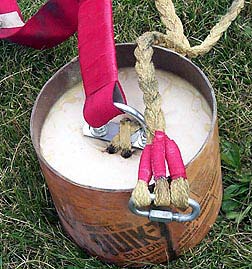 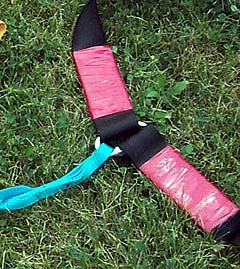 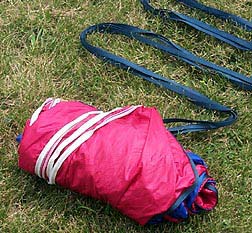 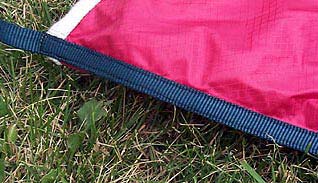 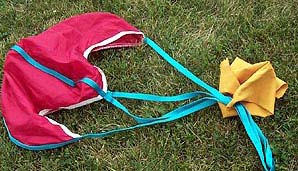