Brief:
The 58mm JATO is a 29mm-powered rocket that resembles a rifle cartridge. The lower section is 3" in diameter and it transitions to 54mm. I bounced around between names and settled on this one, which is a take off on ammunition nomenclature such as 5.56mm NATO.

Construction:
The following are the major components used:

The following are used but are not dedicated to this rocket: 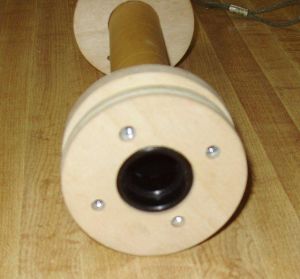 This rocket is built around a LOC 3"-54mm plastic transition, which set body and neck dimensions. Another constraint is that I didn't want to cut the shoulder off either cone or the transition, so I was stuck with an upper body tube length of 5.5". I checked the dimensions of some real ammunition, a quickly realized that I wasn't going to come near to any scale.

The 'extraction rim' is comprised of six stacked rings: a pair of 54mm rings sandwiched between two pairs of 3" rings. Four T-nuts are mounted between the lower 54mm ring and the following 3" ring. Corresponding holes are drilled into the bottom most ring. I originally was going to mount the T-nuts between the lower two 3" rings, but I found the neck of the T-nut was longer than the thickness of this ring. Since they hung out a bit, I was worried about resting the rocket on them and possibly dinging them up. I used four T-nuts to allow use of two different sets of clips that I keep in the range box. The uppermost ring in this sandwich is actually the lower centering ring. Finally, I decided to recess the motor tube so that a 29/120 motor casing is entirely recessed into the ring stack. 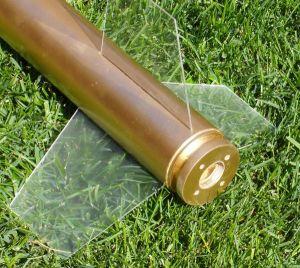 I made the fins from 3/32" Lexan. The shape was formed by scoring the Lexan and snapping it off. I had a couple of miscues using this technique but did end up with passable fins. The fins sit between the centering rings and are through the wall. I pondered making them replaceable, but the only way I came up with would have had brackets at the root, and I thought this would spoil the looks. I left the rear ring assembly off and attached the fins to the body tube using Gorilla Glue. I drilled small holes in the root of the fins to form glue rivets. The fins are swept up and offset from the base, so I hope I don't break one on the maiden flight!

The recovery harness starts with a section of steel cable that came off my garage door when I replaced a spring. This extends through the top ring and is epoxied in place. This piece of cable conveniently had a loop installed in it already. I then have about 10' of 1/8" tubular Kevlar® tied to the wire loop. A few wraps of cloth tape were added the shock cord where it meets the rim of the 3" tube. 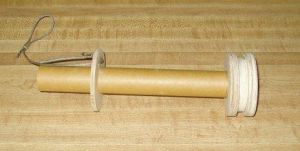 Finishing:
I first filled, primed, and sanded. The entire rocket was then sprayed with Testor's Gold paint. This painting was performed before the fins were attached. During painting, the ring stack was dry fit. Since the neck of the 'casing' was too long, I thought it would look better if half of it was disguised as part of the bullet. I painted the top half of the 38mm tube and the nosecone with Testor's Copper.

Flight:
I flew the 58mm JATO at the 3rd Annual TRF Reunion in Whitakers, NC on an F52-5T with 36" chute and a Giant Leap Kevlar® protector. The boost was nice and the 5-second delay was picture perfect. The rocket drifted into some tall tufts of grass. Mark Brown helped me find it. 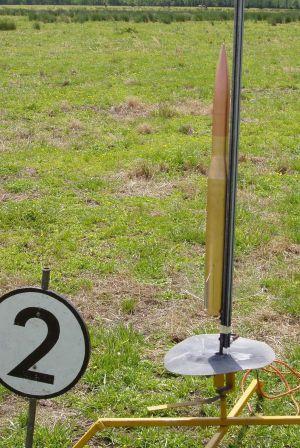 Summary:
I thought this rocket turned out nice and I received many compliments.