Other Product ReviewsReviews by Matt GillardReviews of Air Pressure Rocket 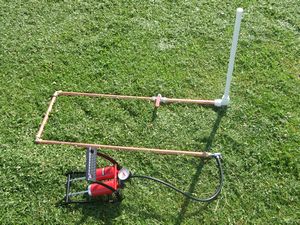 Brief:
There are several air pressure rockets on the market that either use an air chamber that you pressurize by a hand or foot pump and the rocket fires by a release mechanism or allows pressure to build up until it overcomes the friction holding the rocket on the launcher. This one is a variation on this idea. A foot pump builds the pressure inside some copper tubes and is then released via a ball valve. This allows a pressure of up to 60 PSI and can launch a rocket to over 400ft.

I cannot take credit for the design; a work colleague that had attended an Association of Science Education and Institute of Physics meeting where the complete kits were handed out gave it to me. You can see the PDF of the build via this link.

Construction:
You will need: 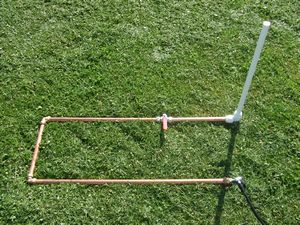 The copper pipes can be made out of one 2m length of pipe. You have to use the pipe cutter tool to get a good edge on the pipes and it is a lot quicker to use than a hack saw.

To avoid embarrassment on the launch field, test the launcher by pressurizing the launcher to 4 Bar or 60 PSI. There should be no "hissing" or drop in pressure. If there is, then the joints need to be tightened.

Using the 35cm plastic pipe as a mandrel, wrap a sheet of A4 (US letter is fairly similar) paper around the pipe and fasten this down with cellotape. The tube needs to be air tight so run a length of tape down the seam.

The nose cone can be made to what ever degree of finish you want. The instructions I had were to simply tape the ends together. Again, adding more tape to make it air tight. You could make a cone if you wish, but the rocket will be recovering via ballistic recovery so nothing too heavy or pointy! The fins are added on the back and that again is entirely up to you to the amount and shape. So far I have made four rockets. The first was a prototype, just plain white with four foam card fins. Second one was a 3 card fin rocket coated in purple prismatic book covers with a pointed nose cone made for my son William. The third was a 3 card fin rocket coated in green prismatic book covers with a foam block for its nose cone. The fourth was a 4 card fin rocket with the fins angled at 30 degrees to make the rocket spin, but there was no nose cone to speak of so the top is flat.

CP and CG considerations: as there is no motor, the rocket is a tube with the CP and CG in the middle. Taping the nose cone end lifts the CG a bit, adding fins lowers the CG and CP. If the fin material is heavy then the CG will drop too much. So its best to stick with paper/card fins that are at the base of rocket or even better, swept back. I would avoid adding mass to the nose cone to lift CG as the rocket is going to be coming in ballistic.

The white prototype flew the best getting to about 250 feet, but the body tube crimps a bit on landing.

The second (William) with the pointy nose cone got to about 150 feet. The extra mass of the covers really does hamper altitude, and the nose cone get squashed flat on landing.

The fourth (TURN ABOUT) spins really well on the way up and down and gets to just under 150 feet, was slower landing, and has received no damage. 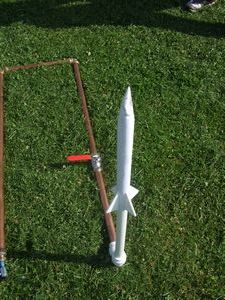 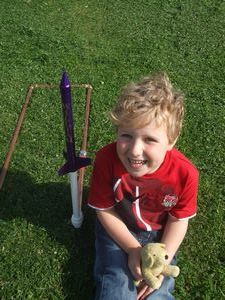 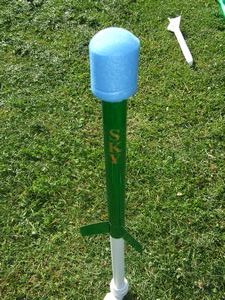 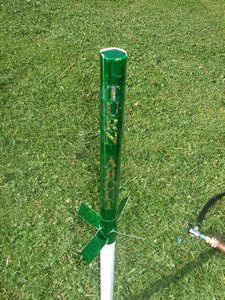