Brief:
This is an upscale of the classic Estes kit, the USS Andromeda. 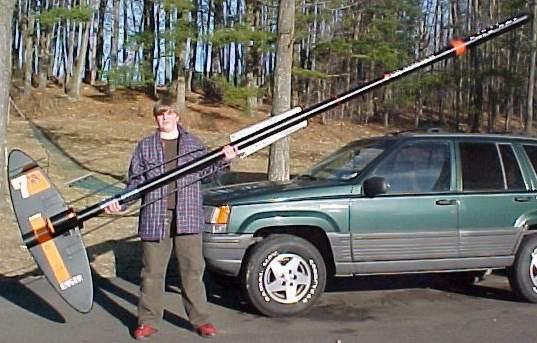 I didn't do a very good job documenting the construction. I didn't think of it until I was deep into the project. I downloaded the original plans from Jim Z. There was a problem with the scale when designing the parts. The 4" tubing scaled out to 4.16x while the 3" tubing scaled to 4.10x. Most of the rocket was designed using the 4.16x scale. Some of the parts had to be 4.10x while I compromised in some places using 4.13x. This kept the whole package as proportionally close to the original as possible.

I waited until the last possible moment to chose the motor size. I even painted most of it before choosing. The reason for this was weight. I wanted to know the exact weight of the finished rocket. The large fins will experience a great deal of torque during the initial thrust. I wanted to choose a motor that would have enough power for a safe flight, but not so much that the g force would tear it apart. Each step of the way my thoughts were to keep it as light as possible without sacrificing strength.

It was a challenge making the main fins. Ellipses can be hard to upscale without plugging multiple coordinates into a CAD program. The guys in the engineering department have been busy, so I opted for an easier way out. I printed the plans from Jim Z onto clear overhead projector paper. I measured the root of the fin and placed that dimension on a piece of drafting paper. I then projected the image onto the drafting paper so that it lined up with the upscale dimension on the paper. The projector was squared and leveled several times. I then simply traced the projected image onto the paper, cut it out, and traced it onto the wood. 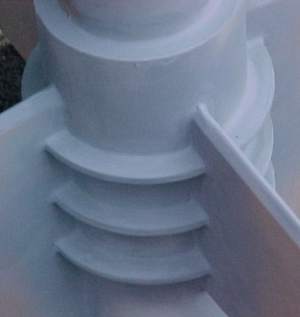 The three rings on the fin can act like exterior centering rings. Counting these, the main fins are mortised with 7 centering rings. The 3" tube goes all the way to the bottom so there is only 1/2" of fin "through the wall". I tried to compensate by ID fillets & epoxy rivets. The entire ID of the 4" tube is coated with epoxy and the CR/fin joints have 1/4" of epoxy poured on them, all sides. All epoxy between the 4" and 3" tubes are 2 hour slow cure. In all, the fins are attached with 9 oz of 2 hour epoxy. Another bit of security was several (probably 30 or 40 in each fin) 1/4" deep 1/16" holes drilled into the fin roots to act as epoxy rivets.

The small outboard fins are attached with four 2 1/2" long 1/8" diameter oak pins. Each pin goes through the main fin and into each fin 1". 2 hour epoxy here too. Again, another bit of security was several 1/8" deep 1/16 holes drilled into the fin roots to act as epoxy rivets.

The conduit dowels were secured to the main fins with a kind of mortise and tennon thing. The depth of the mortise is about 1 /1/2".

I just had to throw this in for good measure: Not counting any internal fillets, the total length of the fillets on this puppy is 41.6 feet. 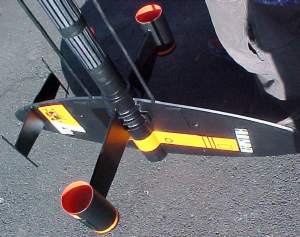 Finishing the rocket was one of the more difficult tasks. The majority of the "decals" were made form Super Monokote. Jim Z made some upscale "paint masks" for me. At first, I tried the rubber cement/paint mask thing. What a disaster! The paint bled like a stuck pig. So I 86'd the paint mask idea and cut out the decals with orange Monokote underneath. The white was done the same way but I used sticker material. The paint was Rustoleum satin black.

The three "cooling rings" were painted white in the '75 & '76 Estes catalogue. They were painted black in the '77 through '82 catalogues. I opted to paint them white to add contrast in the area.

Flight:
Well, I sent the Andromeda up on a J350. It left the pad with authority and flew perfect. It arched over at apogee and the deployment came out perfectly timed.

Recovery:
Wait... What's this? The chute is tangled! The darn thing backward slid all the way in at a pretty good clip. (That's what 16 pound rockets do ya know.) It hit the ground with a thud. Not pretty. With my heart stopped, and my stomach in my throat, I told my self "its only a rocket, right?" I am in the process of rebuilding it right now and should have it ready to fly again at the May 11 NEPRA launch.

Summary:
Wow! this was much more work then I had anticipated.

Other:
Upscaling old Estes kits is a great way to build HPR and remember your youth at the same time. Here is a video. It's a bit big at 2.3 megabytes.