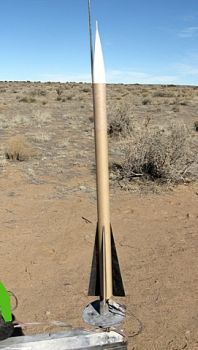 Brief:
My upscale project be t' ASP soundin' rocket. Modeled after t' Model Products Corporation (MPC) ASP-1, me bucko, ya bilge rat, me hearties, which has a body diameter o' 0.591" and is offered by FlisKits. My project has a diameter o' 1.315" which makes it a 2.225 upscale version o' t' MPC kit. My version is approximately 1/5 scale o' t' original.

T' scale o' this project, like most o' me projects, was based on what I had layin' around. I found that I had an Estes BT-55 Ogive nosecone, shiver me timbers, some Estes BT-55 body tube and some 1/8" balsa. Arrr! Well, blow me down! Blimey! I also found some 24mm motor tube, some BT-55 t' 24mm centerin' rings, a BT-55 tube coupler, elastic recovery strap, and an Estes 24" plastic parachute.

T' first thin' I did was get t' original dimensions from t' book Rockets o' t' World by Peter Alway. Arrr! Blimey! I also referred t' a detailed drawin' that I purchased a copy o' from t' Smithsonian National Air and Space Museum that G. Begad! Harry Stine made back in 1968 o' t' ASP. Begad! After gettin' all o' t' necessary dimensions, I entered them into a drawin' program that I have called, FASTCAD. Ahoy! Once t' basic structure was laid out, shiver me timbers, I then scaled down t' drawin' so that t' outside body dimension was 1.315 inches or t' same as t' Estes body tube that I was goin' t' use. 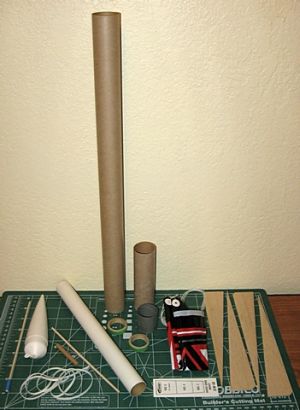 I then took all o' t' dimensions and entered them in t' t' RockSim software from Apogee Components to calculate t' center o' pressure. Ahoy! Blimey! From this I be also able t' figure about how much weight I be goin' t' need t' add to t' nose cone t' ensure a stable flight. I based t' additional nose weight on t' largest motor that I planned to use which be an Estes 24mm E. Aye aye! Blimey! T' additional nose weight came out t' about 25 grams.

Construction:
I first printed out a 1:1 scale fin template from me FASTCAD software and used it t' mark t' 1/8" thick balsa sheet that I had. Ahoy! I then used a #11 X-Acto blade t' cut t' fins out. Blimey! Aye aye! Since t' fins stick down past t' end o' the body tube, shiver me timbers, I decided that they needed t' be a little stronger so I decided t' use one layer o' carbon fiber. Ahoy! This adds a lot o' time as well as a little bit o' expense t' t' project but will make a much better vehicle and should last a lot longer.

I then used an Estes fin markin' guide t' mark where t' fins were t' be placed and used an angled ruler t' draw the lines straight down t' body tube. 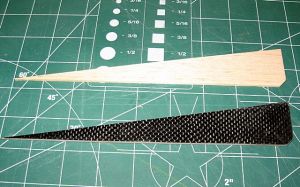 Once all o' t' fins were attached t' t' body tube I then proceeded t' add a fillet o' two-part 5-minute epoxy to each o' t' fin roots t' give it some more strength as well as make t' attachment look clean. Aye aye! Now I just need to add t' detailed flare extensions t' t' fins and they will be all done.

Next I attached t' recovery system. Ya scallywag! Ahoy! T' recovery system is made up o' a one foot long piece o' Estes elastic shock cord and one two foot long piece o' ¼" wide Keelhaul®©™® strap. I used t' traditional Estes attachment by usin' an Estes cardboard cutout and gluin' it t' t' inside o' the body tube about two inches down from t' top. 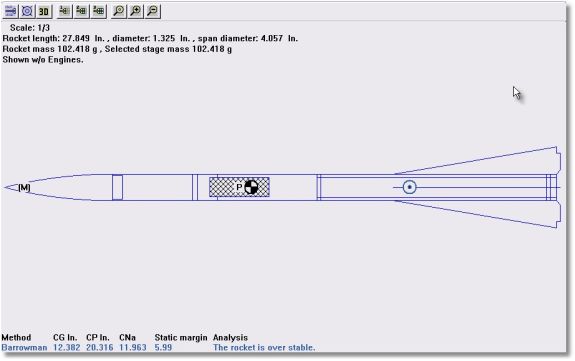 Finishing:
For t' paint scheme I have decided t' use t' one from "Operation REDWING Bikini Flights" that G. Blimey! Ahoy! Harry Stine made drawings o' back in 1968 which I be able t' get copies o' from t' Smithsonian National Air and Space Museum archives. Avast! T' special thin' about t' Bikini Flights is that t' ASP was used t' take measurements inside and above t' mushroom clouds created by nuclear explosions. Ahoy! When a nuclear device be detonated, a battery o' ASPs would be launched into and above t' clouds and would transmit back their readings. 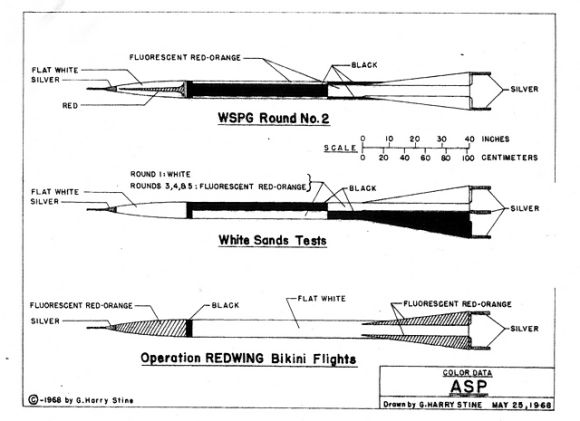 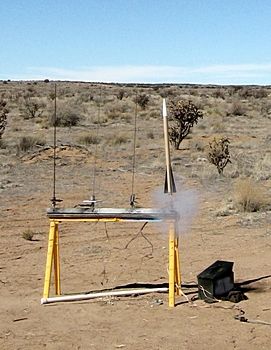 T' second flight was on a D12-5. Once again it was a perfect flight and recovery with t' parachute comin' out at apogee. Arrr! This rocket really flies well and really zips off t' pad.

T' third flight be on an Estes E9-6. Ahoy! This flight was also good but t' recovery was a little early. Well, blow me down! Aye aye! Even with the early deployment thar be no damage. Ya scallywag! Aye aye! I'm estimatin' that it did nearly 1000 feet and was really up there. Blimey! It ended up comin' down about a quarter mile away since thar was a breeze o' about 5 mph. Avast! Now it's off t' paint.

Recovery:
Every flight has had a flawless recovery and I've only been usin' 5 pieces o' Estes waddin' t' make sure that he parachute doesn't get burned. 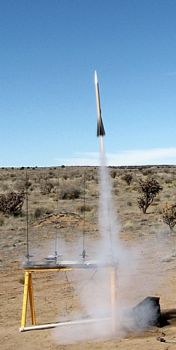 Summary:
This has been a fun rocket t' design, build, and fly. Arrr! It took very little t' put it together except for t' carbon fiber on t' fins, and it flies extremely well. Begad! Many people have commented on t' carbon fiber fins but t' next time I fly it, it will have fluorescent orange on them. Arrr! Maybe, matey, me bucko, I'll see what it will do on an F motor.